Hitting back: Jhelum operation ends with little to show

Hitting back: Jhelum operation ends with little to show 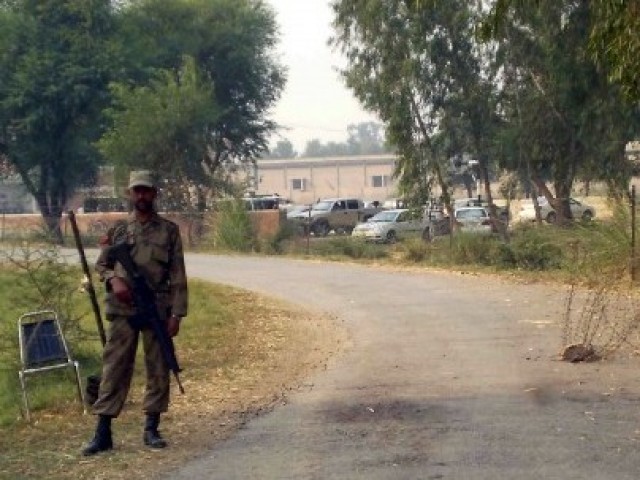 LAHORE: Security forces launched a dragnet against suspected terrorists in Jhelum district that ended the same day, as law enforcers were unable to capture the men responsible for the killing of four intelligence operatives and their local informant on Friday.

The operation was launched in the Pir Chunbbal area of the Pind Dadan tehsil, about 25 kilometres from Jhelum district headquarters. At least three suspects were arrested, including the operator of a public telephone office, though it is unclear how they are connected to the case.

Meanwhile, two collaborators, as well as 30-odd militants involved in Friday’s incident were reported to be still at large.

The only clue that the security forces have about the militants whereabouts – said to belong to the banned Lashkar-e-Jhangvi extremist group led by “Dr Arshad” – are two covers of cell-phone SIM cards, the numbers of which do not work.

Even though the spies killed belonged to the Military Intelligence, the dragnet itself was not conducted by the army. Local residents said that six vehicles of the Punjab Police Elite Force, including 25 personnel, as well as six local police officers were seen patrolling the neighbourhood of Friday’s attack.

“We are operating under orders from top officials,” said Sub-Inspector Akram, without clarifying what he meant.

Meanwhile, details emerged on Sunday of what exactly transpired on Friday. Two weeks ago, a man from Mandi Bahauddin had been kidnapped by LeJ militants, but then later released after being threatened and tortured. He approached Army Major Afaq Ahmed through some relatives, seeking protection against the terrorists.

On Friday morning, Major Ahmed went after the militants hide-out, near the old salt mines and an abandoned shrine known as Pir Chunbbal. He was accompanied by Havaldar Mazhar Abbas, Naik Fayyaz Ahmed, their driver and a local informant named Mehmood Ahmed.

The militants, it seems, were prepared for them. As they reached the hilltop, the terrorists ambushed the military vehicle and, despite their resistance, managed to take the five men hostage, said one eyewitness requesting anonymity.

Around 2.30 pm, just as the area residents were leaving the mosque after Friday prayers, they heard gunshots. When they raced to the top of the hill, they saw five dead bodies.

What is perplexing to most residents is why the government took no action against the militants hideout even though it was an open secret that terrorists were using it. Locals said that the militants used to hide in the abandoned salt mines and used to steal cell-phones from the few people who still visited the Pir Chunbbal shrine.

“We’ve been seeing suspicious activity here for the last four to five months,” said Aurangzeb, a resident of the nearby village of Sihundi. He admitted, however, that nobody had informed the police because they were afraid of the militants.

Law enforcement officials who have visited the shrine and its attached mosque reveal elaborate living arrangements being used by the militants, including a kitchen, clothes, a weapons stash, and even a laundry and bathing area.

The security in the area has now been beefed up, with elite force and local police stationed on roads leading to the shrine.

Who is Dr Arshad

The militant chief Dr Arshad, whose outfit is blamed for Friday’s incident, is a known entity to law enforcement officials. He is blamed for the killing of eight Ahmadis in Mong, a village near Mandi Bahauddin. There is also a case against him for using a rocket launcher against Shahtaj Sugar Mills, as well as attacking a local elected officials, said sources in intelligence agencies.

10 things I hate about university life