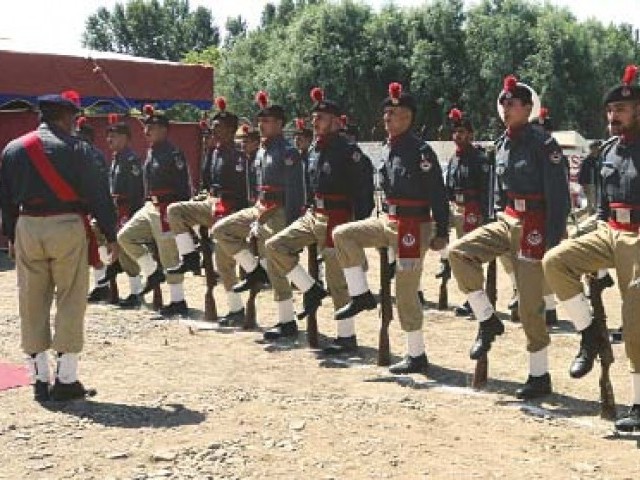 The Swat police force has regained its strength in the region after being ousted by the Taliban. PHOTO: THE EXPRESS TRIBUNE

The Swat police were the first target of militants who wreaked havoc in the peaceful Swat valley in 2007. However, in the past few months the police have staged a comeback with full force, taken complete control of the area restoring order. The locals have heaved a sigh of relief.

“Police were ruthlessly slaughtered, their duty posts, police stations even their houses were directly attacked. They were beheaded and hanged in the different squares of Mingora,” said Naeemullah, a local educationalist. He said the police were threatened to quit their jobs as a result of which thousands announced their resignation in the local newspapers to escape the Taliban killings. “No writ of the government existed at that time in this part of the country,” he added.

However in the last few months the police have arrested more than 50 suspected terrorists and are successfully conducting raids.

According to police sources a few high profile militant commanders are also among the terrorists they have arrested. “It is very encouraging to once again see the police force back in power. We still remember their announcement of resignation in the local newspapers to escape the ruthless rule of the Taliban, which clearly indicated that the Swat police had lost control of the situation,” said Riaz, a local activist of Mingora.

The entire machinery of law enforcement agencies was paralysed and due to the prevailing chaos resulted in May  2009 the largest internal displacement in Pakistan’s history happened in which 2 million people were displaced. However, at the end of 2009 the situation changed and normalcy returned to the region gradually, though people still lived in fear as the Army was controlling the situation.

But after the police regained their former position the locals have started to relax a little. Afreen Khan, a civil society member, told The Express Tribune that the Swat police have efficiently traced terrorists in the last few months and their spy equipment has been upgraded for this purpose. “Such an attitude by the police force has not only won them appreciation but now people believe that Swat is regaining its lost glory and moving towards stability.”

The successful actions have increased the police’s credibility in the locals’ minds and have alarm bells ringing for anti-state elements. If the police continue to carry out their duties on the same lines peace and tranquillity will gradually return to the valley.

Going all out: Donkey-cart rider hands reins of ‘bright future’ to son