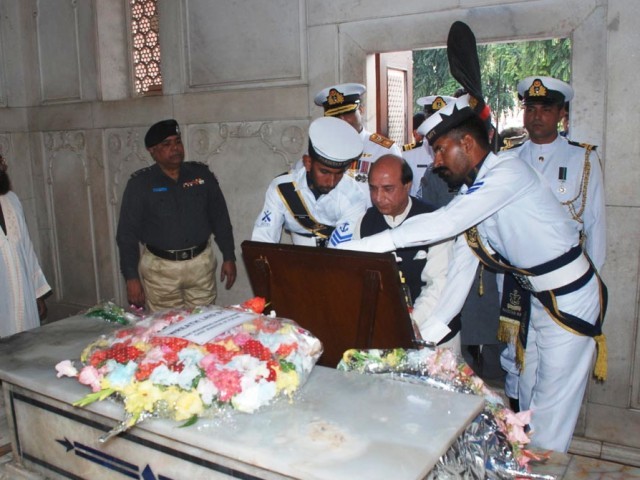 LAHORE: The 134th birth anniversary of national poet Allama Muhammad Iqbal was celebrated with much fervor in Lahore on Wednesday.

A large number of people visited the poet’s tomb to pay their respect and offer fateha.

Celebrations began with the change of guard at the tomb. The ceremony, which began at 7:45am, involved the handing over of the guard to Pakistan Navy by Punjab Rangers. The navy guard was led by Station Commodore Akbar Naqi.

Leaders from different political parties also visited the tomb to pay their respect to the national poet.

Governor Punjab Sardar Latif Khosa said that the poet had convinced Jinnah to lead the Muslims of the subcontinent in the struggle for an independent country. He added that the need of the hour was to understand the message Iqbal carried in his poetry.

Commenting on the political scenario in the country, Khosa said Imran Khan’s rally in Lahore had sidelined Pakistan Muslim League – Nawaz (PML-N) in the city.

Interior Minister Rehman Malik also spoke against the PML-N, calling the party a “not-so-friendly” opposition. Speaking to the media during his visit at Iqbal’s tomb, Malik said that he hoped Chief Minister Punjab Shahbaz Sharif would avoid using improper language while speaking about the President of Pakistan.

Shahbaz Sharif took a different approach to attacking his political opponents, saying that the souls of Jinnah and Iqbal would not rest in peace unless “all the crooks are brought to justice.”

Speaking on the recent allegations leveled against him, Sharif said that he had declared his assets within 24 hours of returning to Pakistan after exile on November 26, 2007.

Lahore High Court (LHC) Chief Justice Ijaz Ahmed Chaudhry, speaking at a gathering at Aiwan-e-Iqbal, said it was vital for the country to follow the guidelines laid down by Quaid-e-Azam Muhammad Ali Jinnah and Allama Iqbal. The LHC chief justice also cut a cake at the ceremony which was held to commemorate Iqbal Day.