Positive Pakistanis: A rupee for a life

Positive Pakistanis: A rupee for a life

Parvee­n Rao was discou­raged from educat­ion — not only did she educat­e hersel­f, but she now runs the One Rupee...
By Saad Zuberi
Published: October 30, 2011
Tweet Email 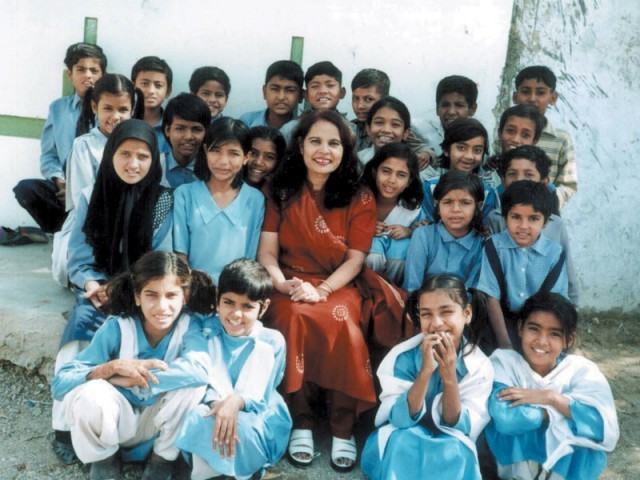 Parveen Rao was discouraged from going to university — not only did she educate herself, she now makes sure that even the least privileged get a shot at an education.

The 45-minute drive from Parveen’s home next to the Expo Center to Khuda Ki Basti in Surjani Town is anything but pleasant, thanks to the traffic and bumpy, unpaved roads along the way. But that hasn’t stopped her from making the journey to Amal-e-Danish, better known as the One Rupee School every morning for the last 16 years.

Parveen Afshan Rao is perhaps one of the most charming and driven women I’ve met in my life. And today I was witnessing the results of her endeavours inside the four walls of her small school-building in one of the most neglected neighbourhoods of Karachi.

“It’s a long drive, but I chose the area because it was comparatively peaceful back then,” she explains as we make ourselves comfortable in her modest yet well-equipped office.  “I understood my limitations and knew I had to start on a small scale and this was the perfect place. When I asked the Katchi Abadi Association for a plot to open the school, they said that they would only consider my application once I had actually opened a school. They needed to make sure I wasn’t a con-woman trying to eat up their land!”

But when the people of Surjani Town heard about her proposal, more than 20 families offered their homes to get things started. “It was very moving… the families were so desperate to send their children to school that they were willing to offer their two-room homes for the purpose. That was when I knew I had come to the right place.”

Fortunately, the Katchi Abadi Association agreed to allot her a plot. She then brought the adjoining plot as well, adding more land later. “We started with just four rooms and now we’ve built more than 20!” Parveen beams.

But what’s the story behind the implausible one rupee fees? Surely the paltry sum cannot be enough to run the whole school, which even has a small computer lab with three or four running computers. “During the first few months, I had rounded up about a hundred children whose parents couldn’t afford to send them to school. I set the fee at Rs30 per month but when the parents started to pull their children out of school, I realised that those people couldn’t pay even that,” says Parveen. “I refused to turn it into a free school like the parents were urging me, so I finally decided to slash the fees by Rs29 and turn it into the One Rupee School.”

Parveen explained that the objective of the one rupee fee is to assure the students and their parents that they’re not getting an education for free. But since the fee was merely nominal, Parveen’s next objective was to raise finances. “This might sound strange, but I couldn’t possibly have gone around asking people to donate money so I could fulfil my dream!” She laughs matter-of-factly. “By the time I opened the school, I was a married woman. I was too proud to ask others for help!”

Eliminating the customary route of hunting for donations, Parveen and her husband started a small printing business, the profits from which they used to run the school. The printing business flourished and Parveen didn’t feel the need to look to anyone for help. . . until 2005, when things took a turn for the worse.

“For almost five years, the money I was making off my printing business was more than enough. Suddenly, as the number of students started increasing, the money started to fall dramatically short.”

By then, the school’s monthly expenses were easily crossing the hundred thousand mark and Parveen recalls herself slowly breaking down because of all the stress. “I was constantly short on personal money because I’ve always believed that once you take up a responsibility, you have to see it through. I knew that if things were ever to get seriously bad, I would probably cut down on my home supplies rather than delaying my teachers’ salaries.”

Things started to look up again when people who had heard about this initiative came forward to help out Parveen. An Indian gentleman who was quite impressed with the concept of the One Rupee School emailed Parveen and is now a regular donor.

And now that things have settled down, Parveen has finally found the time needed to expand her school. The first step was the One Rupee School for underprivileged students, the second dimension is Tez Raft, which provides accelerated tuition for children who were not able to go to school at the right time and are thus lagging behind. The third step is providing education for boys and girls who have reached the matriculation or intermediate level, but whose families want them to start earning a living. Parveen gives these children teaching jobs in the school while tutoring them in her free time and bearing the cost of any further study they want to undertake. “Whether they want to do matriculation or intermediate, bachelors or masters, I pay for their education if they agree to teach younger kids at the school, so that the tradition continues,” she explains.

But what Parveen is most excited about is the fourth step, “Taleem-e-Baalghan is all about educating the mothers of our students.”

Initially, the textbook for these women had been very similar to a ‘Qaida’ but some of the women actually stopped coming to school because their children were mocking them for studying a book they had studied years ago! Parveen then wrote ‘Meri Kitaab’ in a new, personalised format, which made it markedly different from the children’s ‘Qaida’.

“My own family had always been against me studying,” she recalls with a sniffle as she gives me a quick tour of the classrooms before I leave. “They didn’t want me to go to university because I was a free maid for them. They used to say that I could start next year. Next year, they’d say I should start next year… this went on for so long that suddenly I realised that everyone—including my siblings — had all done something or the other with their lives and I was still right there…without an education, doing housework!” And that’s exactly what has propelled this incredible woman to take on the challenge of bringing about a small change in whatever capacity she possesses.

Parveen is kind enough to see me off to the school’s gate. I’m so glad she does, because otherwise I would never have known that the 80-year-old woman entering the building with a book tightly clenched in her hands is in fact the school’s eldest student! Watching the woman rush to her class, I am overwhelmed with emotion. Parveen, however, is beaming ear to ear, “If crazy people like me continue to work for these people, I’m sure one day things will start to look up!”