All issues have been discussed between Pakistan, India: Qureshi

All issues have been discussed between Pakistan, India: Qureshi 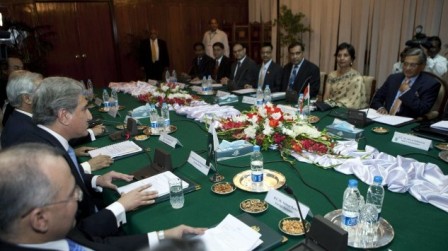 ISLAMABAD: Foreign Ministers Shah Mehmood Qureshi on Thursday said that the Pak-India talks were held in a cordial environment while Indian FM SM Krishna said that the talks have enabled them to develop better understanding.

He gave this statement during a joint press conference with his Indian counterpart SM Krishna.

Infiltration is not policy of government of Pakistan or any agency, Qureshi said while addressing the media.

Commenting on the Kashmir issue he said that progress between Pakistan and India will help ease the situation in Kashmir and that India is not interested in destabilisation of Pakistan.

The foreign minister also said that Pakistan should be given information regarding Ajmal Kasab from the magistrates who recorded his statement.

Qureshi said that terrorism is a problem faced by both the countries and a mutual strategy is needed to combat this challenge. “Both sides can’t achieve objectives while being disengaged,” said the foreign minister.

He added that Pakistan has always wanted good and friendly relations with India.

Indian Foreign Minster SM Krishna said that the talks have enabled them to develop better understanding of each other.

Commenting on India’s involvement in Balochistan, Krishna said that not a single thread of evidence has been given to India on this issue.

The Indian foreign minister said that steps to promote confidence and trust were discussed in the meeting. He also mentioned that Pakistan has assured to take steps regarding the 2008 Mumbai attacks.

The bazaar of opinion