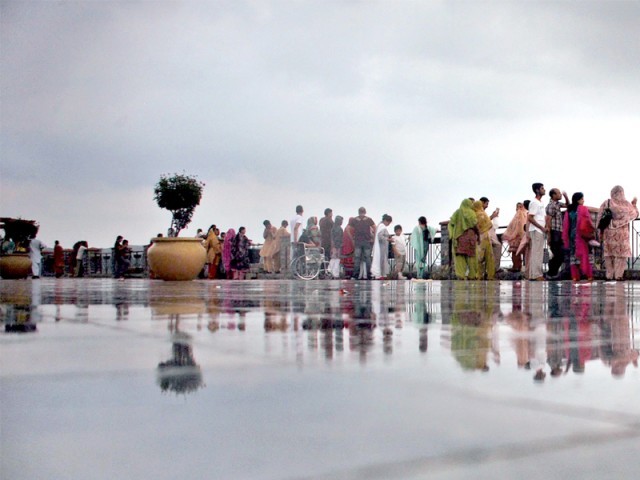 Lake View Park was the top choice for the people to enjoy the chill after the early morning rain on Saturday. PHOTO: MUHAMMAD JAVAID

Showers on Saturday in Rawalpindi and Islamabad heralded the beginning of the winter season.

Starting at around half past eight, the rain continued sporadically for two to three hours. According to the Pakistan Meteorological Department, 4mm of rain was recorded in the twin cities.

After the rain, people took to the tourists spots such as Pir Sohawa, lake View Park, Ayub Park and Jinnah Park.

“I was waiting for it to rain and am glad it did on a weekend. I am having a lot of fun,” said Jalil Sabir a visitor in Pir Sohawa. The cold weather also led to an increase sale of pakoras, samosas and coffee in different markets including Aabpara Market, Super Market, Commercial Market and Rawalpindi Saddar.

Sadia, having pakoras in Aabpara, said, “I am loving the weather, it puts you in a good mood, I plan to go to Murree with my friends.”

PMD Director General Arif Mehmood said that Upper Punjab, Upper K-P, Gilgit-Baltistan and Kashmir experienced thunderstorms and snowfall was recorded in Malam Jabba. However, further rainfall is not expected in the twin cities on Sunday (today), he added.