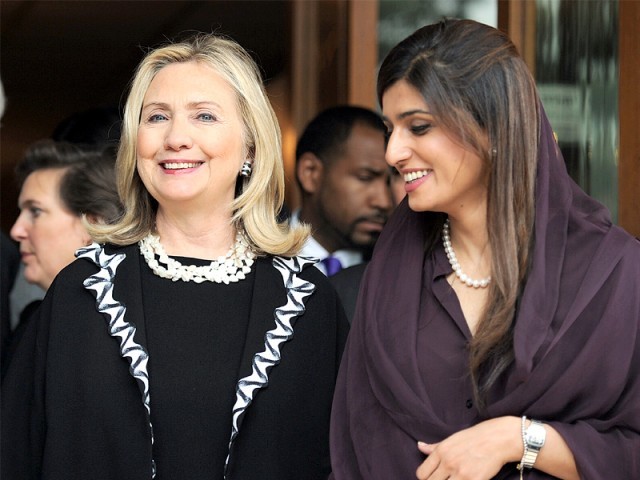 ‘MOTHER-IN-LAW’ IN TOWN: Hillary Clinton with Hina Rabbani Khar ahead of their joint press conference in Islamabad. PHOTO: AFP

After months of belligerent rhetoric, the US is now willing to hold talks with the Afghan Taliban – and is looking at Pakistan as its go-between.

Speaking at a flurry of events on Friday, US Secretary of State Hillary Clinton said she had asked Pakistan to “encourage the Taliban to enter negotiations in good faith.” These talks would also involve the Haqqani network, a move which speaks volumes for the US’ urgency to end the decade-old conflict in the war-torn country.

(Read: A middle ground must be found)

In apparent diplomatic double-speak, however, Clinton also insisted that Pakistan take action within “days and weeks” to dismantle alleged terrorist sanctuaries on its soil, warning that a failure to do so would have devastating consequences for all concerned. “We should be able to agree that for far too long extremists have been able to operate here in Pakistan and from Pakistani soil,” she said.

“It’s like that old story: you can’t keep snakes in your backyard and expect them only to bite your neighbours … eventually those snakes are going to turn on whoever has them in the backyard,” Clinton added.

Clinton’s requests for Pakistan to act as an intermediary were the first time the US had formally and publicly called for such action, and appear to reflect the Obama administration’s strong belief that Pakistan still holds significant sway over the Afghan Taliban. The secretary of state urged Pakistan to use its contacts with the “Pakistani Taliban, the Afghan Taliban, the Haqqanis and the other terrorist groups and try to get them into the peace process, but if that fails, to prevent them from committing more violence.”

Clinton has outlined three conditions for talks with the militants: they must lay down arms, abide by the Afghan constitution and respect basic human rights, especially women’s rights. On this latter point Clinton spoke at some length.

Despite reapplying pressure on Pakistan over alleged safe havens in North Waziristan, Clinton admitted, as had been earlier reported, that the US had already held a meeting with representatives from the Haqqani network, which was arranged through the ISI. “It was Pakistan who delivered the contact person,” Clinton said.

However, the Secretary of State stressed that the talks could not be termed a negotiation: “We’ve had one preliminary meeting just to see if they would show up.” It is believed the meeting took place during the summer, well before the attacks mounted by the insurgent group against US troops stationed in Afghanistan.

Clinton, who led a high-powered US delegation that includes CIA Director David Petraeus and the new Chairman of Joint Chiefs of Staff General Martin Dempsey, held extensive talks with Pakistan’s top civil and military leadership. It was unusual for such senior civil, military and intelligence officials to undertake a joint trip to Pakistan, and the Secretary of State said this reflected the urgency and the importance of working through the many challenges that the countries face.

Asked whether Pakistan and the US had reached an understanding on the Haqqani network, Clinton said there are options other than a military clampdown. Although she said that Pakistan should not “allow them (the Haqqanis) across the border into Afghanistan,” the Secretary of State emphasised that the US was “on the same page with (Pakistan Army chief General Ashfaq Parvez) Kayani.”

Clinton also admitted that the US has no evidence of direct ISI involvement in the attack on the US Embassy in Kabul last month, as was earlier claimed by the US’ then top military man Admiral Mike Mullen. She also agreed that every intelligence agency has contacts with unsavory characters as it is part of their job.

(Read: Attack in Kabul and beyond)

The secretary of state went on to say that, at one point, Washington had considered unilateral action inside Pakistan. Clinton imagined a scenario in which more US personnel had lost their lives at the hands of the Haqqanis. Sentiments would have run high, she explained, but “boots on the ground was never a serious option.”

Foreign Minister Khar, who attended the high-level talks and held separate meeting with Clinton, acknowledged the presence of safe havens of terrorists in the tribal areas. “Do safe havens exist? Yes, they do exist – on both sides. Do we need to cooperate? Yes. We can cooperate more and achieve better results,” she added.

Clinton also highlighted the importance of trade between the two countries, having met President Asif Zardari and discussed economic cooperation. She added that the gas pipeline from Turkemenistan through Afghanistan to Pakistan “is a good thing and we endorse it; it will bring prosperity to the region,” while urging caution over proposed cooperation with Iran, a “difficult and a dangerous” neighbour for Pakistan in her view.

Later Clinton interacted with Pakistani civil society leaders at a townhall style forum where she was confronted with tough questions. One of the female participants likened the United States to an unsatisfied mother-in-law.