Lal meri pat: This is how the Red Sain puts the djinn and Sehwan in a trance

Lal meri pat: This is how the Red Sain puts the djinn and Sehwan in a trance

The fakirs were head bangin­g to the beat of the drums while murmur­ing ‘Dam mast qaland­ar, mast mast’.
By Tooba Masood
Published: October 19, 2011
Tweet Email 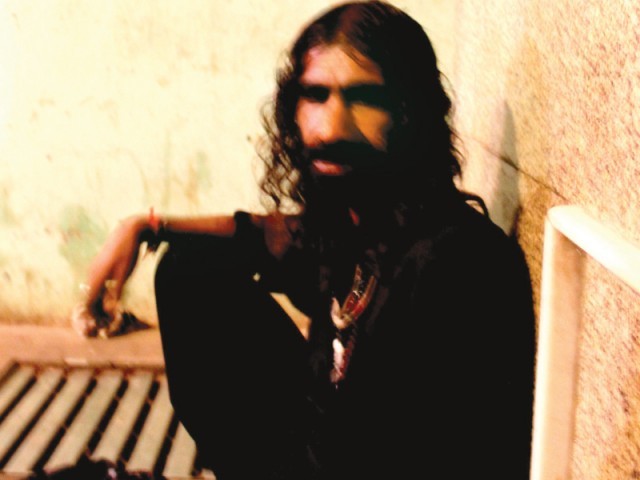 A man bows his head in prayer while the fakir sits near a staircase and waits for people to walk by when they light the diyas.

My mother had been yearning to visit one of the pirs. But a trip to her favourites, Nizamuddin Aulia and Khwaja Moinuddin Chishti, was out of the question so she decided to wait for a sign.

It came out of the blue when a friend said a group of them were going to Sehwan to pay their respects to Lal Shahbaz Qalandar. We jumped at the opportunity.

We left for Sehwan on Sunday afternoon in a white-blue coaster bus, picked up the qawwals, Abu Mohammad and Fareed Ayaz from Saddar, and set off for the highway.

Fiery Zulfiqar Mirza’s face  was plastered over buildings and trucks. Little red flags of the Jeay Sindh Qaumi Mahaz waved as we drove through Jamshoro.

The street in front of the mazaar was on fire with red fairy lights and golden chaddars. People were busy buying dried fruit and red roses as an offering for the Lal Sain. The bus crawled through the market to park right in front of the mazaar. I was bubbling with excitement, half expecting an imposing red structure, but was slightly taken aback when I stood in front of a beautiful but rather run-down blue-tiled mazaar with large brown doors.

I did not want to miss the dhammal as I had never seen one before, so after offering fateha at the grave, my mother and I made our way to where the buzz was. It was as if everyone there was in some sort of a trance. The fakirs were head banging to the beat of the 600-year-old naukat (drums) so fast I thought their necks would snap off. Everyone kept murmuring ‘Dam mast qalandar, mast mast’.

A young man dressed in blue stood in the middle of the crowd, huffing and puffing like a dragon. One of the caretakers says he comes to visit the Lal Sain every year for a djinn haazri. A man in black with oily hair started to push the crowd away. A fakirni by the name of Lal Pari started to explain – the angry young man was going to eat coal.

He had to run back and forth repeatedly till the fakirs got hot coal for him. When people tried to take snapshots of him, he started to howl and became even more aggressive. The drums started to beat once again, the tempo of head banging became harsher as two men wearing white kameezes approached the angry man with a small pot of hot coals. His hands reached out to grab as many as he could but he was restrained. Women were shrieking, many hid their faces behind their dupattas to avoid looking at him. The coals were left to cool down for a few minutes after which the man’s hands were held behind his back and the coals were put in his mouth. He swished past the crowd with hot coal in his mouth – a raging bull preparing for attack. Most of the coal fell out of his mouth as he went down on his knees and fell into sajda. He got up five minutes later and made his way towards Lal Shahbaz Qalandar’s grave site where he offered fateha and left.

Most of the people there were allowed to go inside the area that had been cordoned off around the grave site. They laid out manat-wali chaddars and red roses. Afterwards, we were taken to a smaller pir’s grave across the hall to light diyas – five for a manat (request). Pink and red rose petals and threads lined the stairs that led to his grave. The diya wallahs sat with a bucket of oil, sprinkling it on anyone who walked passed them.

At around 12:30 am, the doors of the mazaar were shut with a small prayer. By 2:45 am, the Lal Sain’s caretakers had started to get ready to open the doors again. A bell was rung at 3 am. The janitors were mopping the courtyard. When the clock struck 3:20 am, a caretaker with flaming red hair started beating the drums. People started to gather around the doors while a man was bent in sajda. Two men dressed in white approached the large wooden doors and sat down, a red chaddar was draped over their shoulders. After a small dua they took out a big silver key, kissed it and then proceeded to unlock the doors. This, Lal Pari told me was the ghusal-e-mazaar. The men were allowed to enter immediately while the women had to go around the back and were not allowed to set foot in the grave site area till it had been cleaned and the gadi nasheen had done the taj poshi – changing the headdress.

According to a fakir who has been at the mazaar for over 65 years, a family started making the taj after maghrib, they decorated it with red thread, flowers, peacock feathers and gota, and handed it over to the gadi nasheen before the ghusl.

The flowers that had been laid on the chaddars earlier in the day were brushed aside with peacock feathers – most of them had been strung together by red thread that was later cut and distributed among the men and women there. Many women burst into tears while praying, some went up to a silver goblet which the fakirs claim has the rock Lal Shahbaz Qalandar wore around his neck to keep his head bent so he stayed humble.

The angry young man from the day before was there too and he looked at peace with himself. I saw his face before he left, it held a sombre expression which seemed to say that he was sad to leave but he’d be there next year, again. He bid farewell to the Lal Sain by touching the taj gently and walking backwards, he did not want to show the pir his back in case he took offence.

We were on our way out, when we heard the drums start up again, the caretaker with the flaming hair had started to beat them softly. It was his way of sending a message to the villagers, a way of saying that something good has or is about to happen.