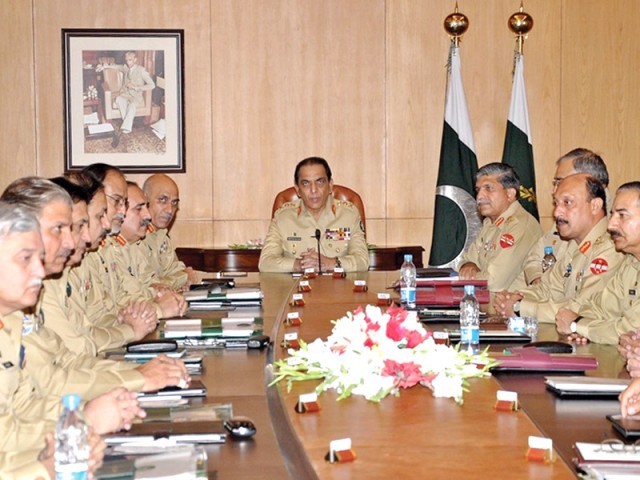 The corps commanders are reported to have discussed possible implications of the recent strategic partnership deal that Afghanistan signed with India. PHOTO: INP

The Pakistan Army is ready to address the US concerns vis-à-vis the Haqqani network but shows no signs of going after them in the North Waziristan tribal region where, Washington believes, the insurgent group is headquartered.

At a meeting in Rawalpindi on Friday, the top military commanders expressed their willingness to lower tensions with the United States by narrowing down differences on the Haqqani network.

“Pakistan wants a constructive engagement with the US to deal with the Haqqani issue,” an official familiar with the development told The Express Tribune.

The official, who wished not to be named, ruled out the possibility of a military operation in North Waziristan – a region dubbed by the US as the most dangerous place on earth.

“Use of force is not the answer to every problem,” he said repeating the recent statement by Army chief General Ashfaq Parvez Kayani.

Addressing the Pak-Saudi joint military exercises in Mangla on Thursday, Gen Kayani reportedly said that military operations were not the ideal way of dealing with every issue.

His remarks are being seen as Pakistan’s hardening stance on the North Waziristan operation despite the mounting US pressure.

However, it is unclear what exactly Pakistan is offering to the US as an alternative to a military operation in order to deal with the Haqqanis.

A senior military official, when approached, referred to the foreign ministry’s last news briefing in which it said that Pakistan’s policy was guided by its national interests.

“We have our own national interests … we have certain redlines and we are very clear that we won’t compromise on them,” said the official who spoke after being assured that his name would not be revealed.

The corps commanders also discussed possible implications of the recent strategic partnership deal that Afghanistan signed with India.The commanders voiced concerns on allegations by senior Afghan officials that the Inter-Services Intelligence (ISI) was involved in the assassination of former Afghan president Bhurhanuddin Rabbani.

A brief statement issued by the Inter-Services Public Relations (ISPR) did not mention any of these issues. “The conference was a part of regular monthly meetings. The forum took a comprehensive overview of the routine professional matters aimed at enhancing proficiency of the army,” the statement said.

Meanwhile, US Ambassador to Pakistan Cameron Munter met with Foreign Minister Hina Rabbani Khar to discuss the ongoing tensions between their countries.

“Bilateral relations and the regional situation were discussed. Both agreed to work together for strengthening bilateral cooperation and for coordination on regional issues,” said a brief statement issued by the Foreign Office.

An American diplomat commenting on the meeting said that the two countries were making efforts to sort out their differences.