A 31-year-old woman, who had separa­ted from her husban­d and filed for divorc­e, was attack­ed with acid while standi­ng...
By Mohammed Soomro
Published: July 10, 2010
Tweet Email 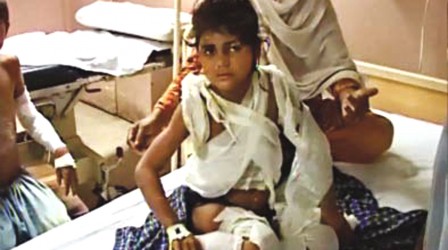 The children received major burns to their limbs and torsos

A 31-year-old woman, who had separated from her husband and filed for divorce, was attacked with acid while standing outside a local bus stop in Madina Colony, Sadiqabad.

Aziz Mai, was waiting for a rickshaw with her two daughters and son, aged 6, 20 and 8 respectively, when her husband doused them with acid. One passerby who attempted to deflect the attack also received serious burns. The husband managed to escape, while the woman, her children and the passerby were shifted to Tehsil Headquarters Hospital by a Rescue 1122 ambulance.

Six-year-old Shazia and eight-year-old Ali received third-degree burns to their chest, arms and legs while Aziz Mai only received minor burns to her left hand. Her oldest child, who is married, was not injured in the incident.

The victims were given first aid treatment and referred to Sheikh Zayed Hospital in Rahim Yar Khan.

Aziz Mai stated, “I was tired of our constant fights. He had started using drugs and our financial situation had deteriorated. I tried to stop him but he just would not listen. He started selling our furniture and household items to finance his addiction. He became increasingly abusive and violent as his addiction grew. So I decided to take my children and move in with my brother about two weeks ago.”

“He must have planned the attack because he was carrying the bottle filled with acid in his pocket.

He saw us and lunged forward. He does not care much about the children.

He is just upset that I have asked for a divorce and moved out with my children,” added Aziz Mai.

Ali added, “We were just standing waiting for a Qingqi when my father suddenly showed up and threw acid at us. He was really mad at my mother and was yelling at her.”

Officials of City police station have registered an FIR against Sattar, the woman’s husband, and recorded the statements of Aziz Mai and several eyewitnesses. The station house officer said that the accused would be arrested within 24-hours.