Law enforc­ement agenci­es are respon­sible for the safety of a commun­ity under attack by extrem­ists, says report.
Published: October 5, 2011
Tweet Email 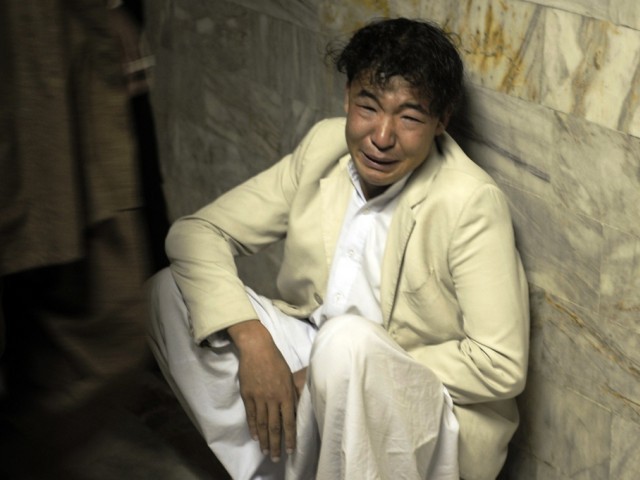 Pakistani Shia Muslim mourns the killing of their community members in a hospital in Quetta on October 4, 2011. PHOTO: AFP/ FILE

NEW YORK: In the wake of recent incidents of sectarian violence in Balochistan, the Human Rights Watch (HRW) has urged the government to provide protection to the Shia community and hold accountable those responsible for targeted killings.

The statement came in response to a recent attack in which unidentified gunmen riding on motorbikes stopped a bus carrying 20 passengers who were headed to work at a vegetable market and opened fire on them, killing 13 Shia Muslims and wounding six others.

A similar incident took place in Mastung on September 19 when gunmen opened fire on a bus carrying Shias to Iran for their holy pilgrimage and killed 26 of them. The banned militant organization Lashkar-e-Jhangvi claimed responsibility for the September attack.

“The targeted killings of Shia are a barbaric attempt at sectarian and ethnic cleansing,” said Brad Adams, Asia director at Human Rights Watch. “The government’s failure to break up the extremist groups that carry out these attacks calls into question its commitment to protect all of its citizens.”

Sunni militant groups such as the supposedly banned Lashkar-e Jhangvi operate with impunity even in areas where state authority is well established, such as Punjab and Karachi, said release by the organisation.

It further states that the military, law enforcement agencies and the Frontier Corps (FC) are responsible for the security of the people and they should safeguard the lives of the people belonging to a community under attack by the extremists.

HRW advised the federal and provincial government of Balochistan to direct the military and the FC to ‘actively protect those facing attack from extremist groups.’

“National and provincial authorities should make all possible efforts to quickly apprehend and appropriately prosecute those responsible for the September 19 and October 4 attacks and other crimes targeting the Shia population,” the report said.

“President Zardari needs to understand that the will of the government to protect ordinary people is measured by action,” Adams said. ”As far as protecting the Shia is concerned, Pakistan’s government has been all talk and no action.”

Visit of pilgrims to Iran be regulated: Rehman Malik