The origin­s of the Hazara are disput­ed, though there are three primar­y theori­es.
By Imran Yusuf
Published: October 5, 2011
Tweet Email 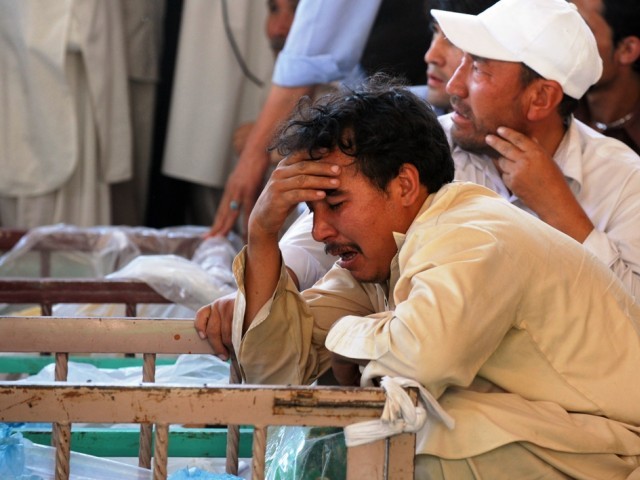 Pakistani Shiite Muslims mourn next to coffins of their community members during a funeral ceremony in Quetta on October 4, 2011. PHOTO: AFP

There are over 900,000 Hazara living in Pakistan, a figure larger than the population of Washington DC. Yet this is a vulnerable community, besieged by anti-Shia violence on one side and drawing suspicion and indifference in equal measure on the other.

Old news, a Hazara might say, as a brief look at the community’s past reveals a tradition of persecution, of which yesterday’s attack in Quetta is but the latest atrocity.

The origins of the Hazara are disputed, though there are three primary theories. The Hazara could be of Turko-Mongol ancestry, descendants of an occupying army left in Afghanistan by Genghis Khan. A second theory goes back two millennia to the Kushan Dynasty, when Bamiyan in Afghanistan – home to the large statues blown up by the Taliban – was a centre of Buddhist civilisation. Subscribers to this idea point to the similar facial structure of the Hazaras with those of Buddhist murals and statues in the region.

The most widely-accepted theory is something of a compromise: that the Hazara are mixed-race. Certain Mongol tribes did travel to eastern Persia and what is modern-day Afghanistan, putting down roots and integrating with the indigenous community. This group then formed their own community which became the Hazara, with their distinctive facial features, sometimes termed Mongoloid, which bear the origins of their central Asian ancestry.

Either way the Hazara settled in central Afghanistan, though in the mid-19th Century their brutal history of persecution began when more than half their population was killed or forced into exile.

The Pashtun Amir Abdul Rehman, who the British termed Afghanistan’s Iron Amir during the Raj, invaded the Hazara homeland in the country’s central highlands, forcing them to give up land, and pushing many into exile in Balochistan.

There was already Hazara movement into British India by this point, with migrants working in labour-intensity jobs such as mining. Some Hazaras also came to Quetta during the 19th Century to work on the construction of Indian railways. However, the majority were forced to leave by Rehman’s ethnic cleansing.

But the Hazaras’ history is not exclusively one of victimhood. In 1907 British officer Colonel Claude Jacob raised a regiment made up solely of Hazaras, who had developed a reputation for martial strength, perhaps based on a romanticisation of their possible lineage to Genghis Khan.

The Hazaras who did not make the military cut found jobs as unskilled labourers, for despite their knowledge of agriculture, they owned no land in their new territory.

Quetta’s 1935 earthquake actually helped the Hazara community in some ways. The migration away from the city after the disaster opened up positions in semi-skilled labour, which led some Hazaras to become shopkeepers, tailors and mechanics.

The Second World War saw more Hazaras enlisted by the British Indian Army. Some thrived: one of them was General Musa Khan, who led Pakistan in the 1965 war against India.

Since Partition, however, the Hazaras have remained an underprivileged community. Currently between 500,000 and 600,000 live in Quetta, spread over two slums in the east and west of the city. A large proportion of their income is remittance payments from Iran, the Gulf, Europe and Australia.

Among the Hazara in Quetta are tens of thousands of new migrants escaping the wrath of the Taliban. Persecution of Hazaras persists in Afghanistan, where the Taliban have shown no let-up in their attack on Shias, burning villages and kidnapping community members, forcing further emigration into Pakistan.

In Pakistan, the sectarian violence also has a geopolitical context, with a deeply-embedded belief that the Hazara receive Iranian support. General Zia allowed state actors to support anti-Hazara groups for this reason. As mentioned by columnist Ejaz Haider in this newspaper recently, the view of the Hazara as Iranian proxies still persists in Balochistan.

Four days ago, rallies in Australia, the US, the UK, Austria, Norway, Denmark and Canada marked an international day of protest against the unending wave of attacks on Hazaras in Pakistan. The call has evidently not been heard. Indeed, approximately 250 Hazara citizens of Pakistan have been killed in the past three years.

If wishes were horses