Gilani called on the US to work with Pakist­an to form a cohere­nt policy over Afghan­istan.
Published: September 25, 2011
Tweet Email 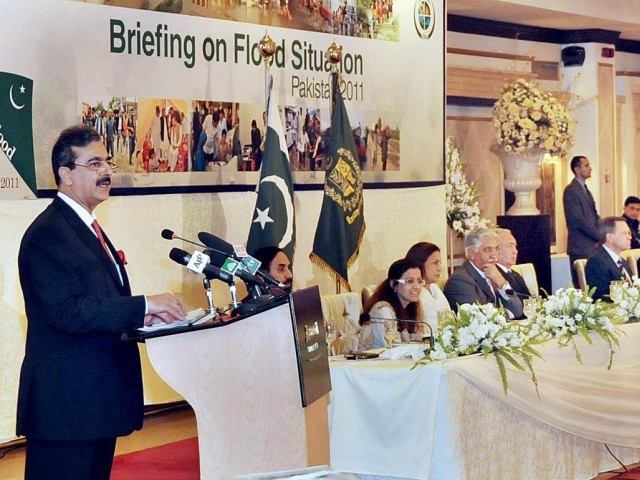 Prime Minister Yousuf Raza Gilani addresses a briefing on the floods situation in Pakistan at a collective of diplomats and organisations. PHOTO: AFP

The Prime Minister while reading out a policy statement during a briefing on the floods in Pakistan for diplomats and international organisations went on to say “only terrorists and militants will gain from any fissures and divisions. Pakistan’s credentials and sacrifices in the counter-terrorism campaign are impeccable and unquestionable.”

Prime Minister Gilani said “allegations betray a confusion and policy disarray within the US establishment on the way forward in Afghanistan. Clearly, there is concern over the deterioration of the security situation in Afghanistan.”

“Recent attacks in Kabul including on the US Embassy were disquieting. We condemn these attacks”, he said.

“A clear roadmap so that all three i.e. Afghanistan, Pakistan and the US are on the same page and work together for achieving the stated goal of reconciliation and peace.  It is with this in view that we established the Trilateral Core Group which has met four times,” he added.

He said the propaganda blitz against Pakistan was most unfortunate, adding, it vitiates the atmosphere and is counter productive. “It tends to ignore the sacrifices by the people of Pakistan and negates all that we have endeavoured to achieve over the last so many years.”

“More than 35,000 Pakistanis have fallen victim to the acts of terrorism and many more have been injured,” he added.

Gilani said “we have taken resolute action against terrorists and militants. We have done so in our national interest. The United States knows very well the full account of large number of al Qaeda operatives that were interdicted, captured and killed by our security forces.”

“Terrorists are targeting innocent civilians, bombing our markets and places of worship and carrying out targeted assassinations against security and law-enforcement personnel,” he added.

The Prime Minister said, “Clarity and strategic coherence would lead to the necessary operational policy coordination.  Realities and the dynamics of the situation on the ground also need to be objectively factored,” adding, “It is with this in view that we consistently signalled closer and deeper engagement with the US and Afghanistan.”

Gilani said Pakistan cannot be held responsible for the security of US NATO/ISAF forces in Afghanistan, adding “while there have been terrorist attacks in Kabul and Wardak, there have also been numerous attacks on Pakistan launched from sanctuaries and safe heavens in Nooristan and Kunar in Afghanistan.”

“It is as much the responsibility of the Afghan National Army, NATO and ISAF not to allow such cross-border militancy. Joint operations and coordination are essential. Let’s be objective and not get carried away by emotions,” he added.

GIlani said that Pakistan still sought greater engagement with the US despite the growing accusations of Islamabad’s links with the Haqqani network “in our recent interaction with the United States, including Foreign Minister’s meeting with the Secretary of State, as well as at the military and intelligence tracks, we have emphasized the need for deeper engagement.”

“However, this can only take place on the basis of mutual respect. Let’s avoid mutual recrimination and recommit ourselves to working together for eliminating terrorism and for reconciliation and peace in Afghanistan. Prosperous, stable and peaceful Afghanistan is in the interest of Pakistan,” he added.

“Pakistan’s national interests will guide our policy,” the Prime Minister made clear.