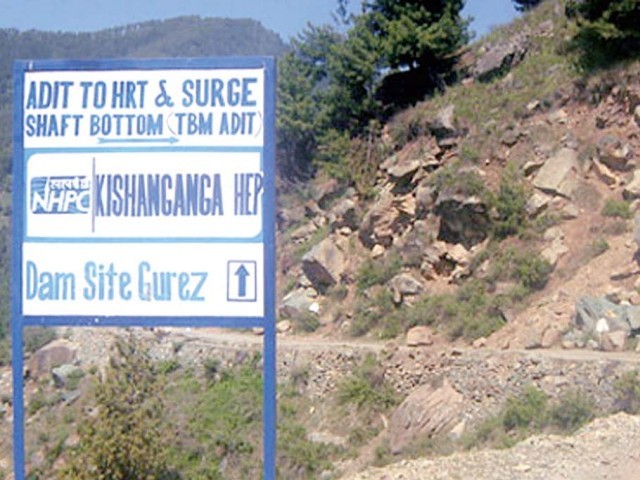 KARACHI: After several months of defeats in the international diplomatic arena, Pakistan scored a rare victory on Saturday: the Netherlands-based Court of Arbitration has accepted Islamabad’s application for a stay-order on the Kishanganga Dam and ruled that, until a final settlement between India and Pakistan is reached, New Delhi will not be allowed to resume construction.

The seven-member court unanimously ruled in favour of Pakistan’s application seeking a stay order on construction of the Kishanganga Hydroelectric Project (KHEP).

Under the order, India will not be allowed to make “any permanent works on or above the Kishanganga/Neelum riverbed at the Gurez site that may inhibit the restoration of the flow of the river to its natural channel.”

Pakistan has contended that the Kishanganga Dam – named after the tributary of the Jhelum River – violates the 1960 Indus Waters Treaty signed by India and Pakistan to allocate the use of the Indus river system.

The ruling is a surprising reversal of an August 25 decision by the panel that had decided against issuing a stay order. On that occasion, infighting within Pakistan’s legal and diplomatic team had caused them to present what the court had then described as an unconvincing argument.

While not an endorsement of Pakistan’s stance on the dam building controversy, the stay order grants one of Islamabad’s most important requests: that India’s construction activities be halted. Crucially, from the Pakistani perspective, no such order has been issued to Pakistan, which is building a dam three times bigger, known as the Neelum-Jhelum Hydroelectric Project (NHJEP).

This order is absolutely critical for one reason: the court is likely to determine which of the two projects – KHEP or NHJEP – should be allowed to proceed based on one criteria above most others: which dam is closer to completion.

This methodology is known as the ‘priority rights method’ and is derived from the Indus Water Treaty itself. It is considered unusual in international law and had been deemed by many Pakistani experts as almost fatally weakening Pakistan’s case, since India has completed about 40% of the construction on the Kinshanganga Dam.

It is unclear, however, whether the stay order improves Pakistan’s chances of winning the overall case against the Indian dam.

On May 17, 2010, Pakistan had initiated proceedings against India at the Court of Arbitration under Article IX and Annexure G of the Indus Waters Treaty.

India had expected Pakistan to seek a stay order in January 2011 and was surprised when Pakistani officials failed to do so. Indian newspapers described Pakistan’s delay as an ‘unexpected reprieve’ for New Delhi.

The new stay order comes with an enforcement mechanism: Pakistan and India will arrange for joint inspections of the dam site in India to ensure that the Court’s orders are followed.

India had planned to generate about 300 megawatts of electricity from the dam, a project that is now likely to be put into jeopardy.

The seven-member Court of Arbitration is based in The Hague, in the Netherlands. It is chaired by Judge Stephen M. Schwebel (United States), former President of the International Court of Justice. The other members of the Court are Sir Franklin Berman (United Kingdom), Professor Howard S. Wheater (United Kingdom), Professor Lucius Caflisch (Switzerland), Professor Jan Paulsson (Sweden), Judge Bruno Simma (Germany), and Judge Peter Tomka (Slovakia).

Girl accused of blasphemy for a spelling error