‘It Runs In The Family’ is a fresh take at brainl­ess comedi­es.
By Rafay Mahmood
Published: September 25, 2011
Tweet Email 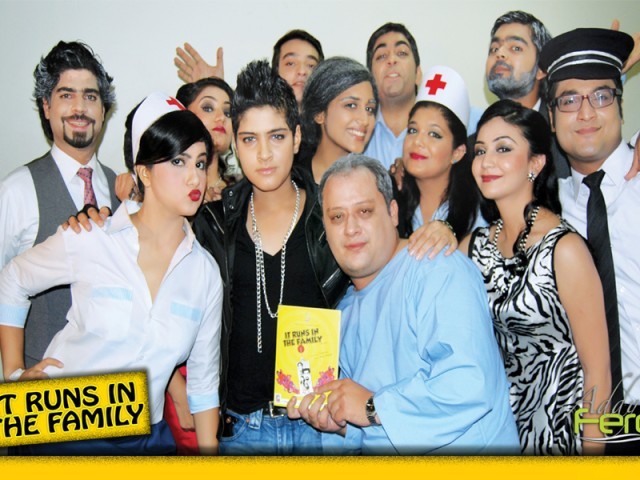 Usama Qazi’s play ‘It Runs In The Family’ is silly to the extent of being comical. PHOTO: FILE

Theatre in Karachi is experimenting with different genres of plays. From classical plays performed in the National Academy of Performing Arts (Napa) to entertainment packed masala plays like “Chicago” and “Bombay Dreams”, theatre enthusiat in Karachi have approved them all. The aforementioned type of plays, however, have also become two extremes of theatre and one rarely finds a play that is not garnished with forced dance performances  or is not brimming with old school Urdu (a standard set by Napa). Luckily, Usama Qazi’s “It Runs In The Family” is the middle ground of the two extremes and by the applause it received, one can easily say that the play worked for the audience.

Ray Cooney’s original version of this play is considered ‘farce of the dumbest kind in the global theatre community’ by many theatre critics in The New York Times but in a country like Pakistan, the high demand for entertainment makes the audience more tolerant towards brainless comedies. Fortunately “It Runs In The Family” comes at a time when people are willing to pay for anything that helps them forget the halaat and the problems that surround them.

The play is set in Saint Andrew’s Hospital in London, where David Mortimore (played to perfection by Khan) is preparing a speech which may well make or break his career. The peace which he was hoping for  evaporates when a nurse, with whom he had an affair years ago, turns up to confront him with the news that he is the father of her 18-year-old son. The play is a hilarious comedy of errors highlighted by remarkable performances by some actors. Despite weak delivery and incoherent speech by some actors, which made parts of the play almost incomprehensible, the overall performance of the crew was above average.

It is foolish to expect a perfect British accent from Pakistani actors, but at the same time it does become frustrating for the audience to be unable to clearly hear a dialogue which is not in their mother tongue. However, this drawback did not take away from the comic timing of the actors or the entertainment quotient of the play. Unlike many half-hearted local attempts in which the audience hadn’t quite grasped the funny in the pun intended and end up laughing at all the wrong things, “It Runs In The Family” tickled the audience when it was meant to.

Suleman, who played the character of Dr Bonny stole the show by declining justice to a very strong character. From his gestures to expressions to body movements, everything spoke of a lazy yet lovable Garfield-like character, which is exactly what was expected of him. A standing ovation for him at the end of the play clearly showed that he did his part well.

Mr Leslie, the crazy old man on the wheel chair played by Patrick, doesn’t serve a narrative purpose in the original script as such and exists for comic relief. Every character bumped into his wheelchair time and again, but it was his persistence in sexually exploiting any character on stage, which gave humour to th situation. Khan who played the protagonist Dr Motimore, also lived up to discipline and strength demanded by his character.

Although the performance seemed amateurish at times, with actors shuffling on stage and standing expressionless while they waited for their dialogues, the play as a whole is a much-needed respite for the audience and a must watch for  anyone who can understand English. Many in the audience thought that it was a bit too long and could have been even better if the director worked a little on the pace.

All in all, after watching “It Runs In The Family” one regrets missing out on Qazi’s previous production  “Run For Your Wife” which was a smash hit and was considered better  than his latest play, by many. Two thumbs up to Qazi for putting up a brilliant show!

“It Runs In The Family” is being performed at the Karachi Arts Council till October 4 every night at 8 pm.