‘Filmmaking needs a push in the right direction’

‘Filmmaking needs a push in the right direction’

A fresh perspe­ctive and an eye for detail are essent­ial if one wishes to stay releva­nt in the field of filmma­king.
Published: July 6, 2010
Tweet Email 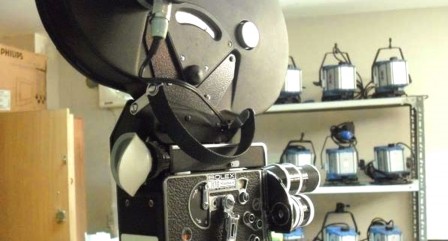 With training and awareness, the world is a filmmaker’s oyster, says SAAMPT dean

A fresh perspective and an eye for detail are essential if one wishes to stay relevant in the field of filmmaking. This is why the South Asian Academy of Motion Pictures and Television (SAAMPT) dean Daniyal Ali Khan felt that is was important to harness the two traits through proper training.

“Filmmaking is the most ‘in’ thing across the planet these days,” said Khan at the SAAMPT open house on Sunday, attended by around 40 prospective students. Khan believes that the country needs visionaries who can revamp the filmmaking industry, polish the existing talent and create awareness regarding the importance of the craft.

“We have so much to show of ourselves to the world, but for some reason, we are not doing anything,” said Khan, who added that this is one of the reasons why there are so many misconceptions regarding Pakistan everywhere in the world. “Filmmaking has a great future in Pakistan because we have so much happening. Things like politics and day-to-day incidents make for great story ideas,” he said.

Khan claims that his institute, which started in February this year in Karachi, is at par with a number of good film schools across the world.

“We are trying to maintain the same standard of education followed by filmmaking schools in other parts of the world,” said Khan, who criticised the performance of other institutes, claiming that they were confusing the students with elaborate plans. “More often than not, we find film majors working as VJs or RJs. Film studies needs to be more focused,” he said.

“It is the responsibility of film institutions to work towards a change in the industry and motivate people to bring their potential and talent in the field,” Khan believed.

Currently, there are eight students enrolled at SAAMPT, which aims to train students by giving them hands-on experience with basic technology available in the film industry at the moment as well as modern technology that can be employed to bring about change, said Khan, who underlined the importance of correct teaching methods that can only be provided by qualified professionals whose understand the roots of the field.

Cynara Siddiqui, who is enrolled in a one-year course at the academy, said that she was very happy with her education in documentary and filmmaking. She was working for a private television channel when she decided to learn more about making documentaries and came across the programmes being taught at SAAMPT.

“After talking to Daniyal, I was impressed with his vision and dedication. Therefore, I joined the academy. He intends to jump-start the industry,” said Siddiqui, who added that she also wants to contribute towards a fresh direction in documentary making.

Other students at the open house also expressed their interest in the programme and said that they were keen to join but were confused regarding the scope of the field, which they believed was limited due to the lack of awareness, making it a risky career choice.

While Khan agreed that the local trends in filmmaking were disappointing, he believed that Pakistan stands a good chance of competing with foreign productions if more films were made by young people, who were enthusiastic and aimed to make a difference.

“People are not investing in the film industry, the cameramen have disappeared, studios have been changed into wedding halls, we have no new cameras, no infrastructure and no professionals,” said Khan. “We need to revive that.”