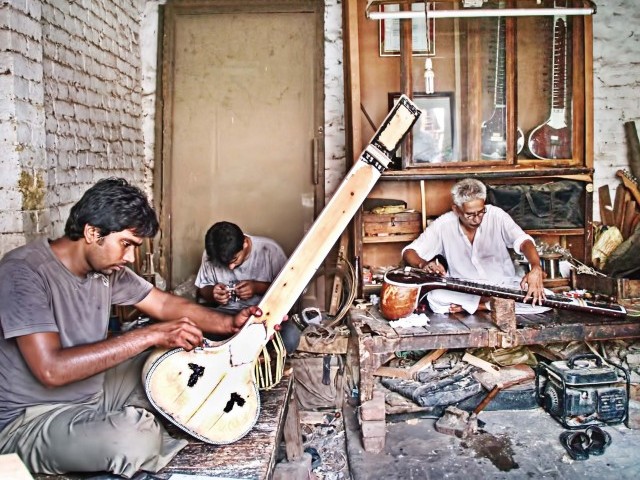 The only makers of the classical musical instrument in Lahore are determined to continue the family business.

In a room five feet by 10 feet, Zia, 64, and his son Imran, 25, attach strings to a wooden frame, a meticulously carved structure with white embellishments. Imran works on the body, inlaying diamond-shaped pieces of plastic and polishing it, while Zia fixes and tunes the strings.

“This one is for a collector of classic musical instruments,” says Imran. “He realises this is a disappearing craft.”

Sher Muhammad Sitar Makers, the small shop in Bansanwala Bazaar where Zia and Imran’s family has been making and selling the iconic classical music instrument since 1948, used to compete for customers with Bombay Music, the only other sitar makers in town.

But Bombay Music, also in Bansanwala Bazaar, stopped producing sitars some 20 years ago after the owner and main craftsman died. They now repair various musical instruments.

Zia, who is also a professional sitar player and winner of a Pride of Performance, says business was good until the 1970s. “My son and I are here by ourselves now. But from 1948 to 1970, my two elder brothers, my father, and I worked here with seven other employees. Sometimes we had to delay orders because we were too busy.”

Today, they sell about 15 sitars a year. Most customers come for repairs. “The good players come when they need the jawaari (a part of the instrument) adjusted to improve the sound,” says Imran. “The beginners come when they’ve broken something.”

They make two kinds of sitars, one for beginners and one for professionals. Each sitar takes about four months to make and sells for between Rs10,000 and Rs60,000. Most of them are sent to shops outside Lahore. “They are sold without a sticker or a stamp to vendors who display or resell it,” Imran says.

They make six or seven sitars every year for students of Home Economic College, he says. The National College of Arts and Lahore Art Council have their own stock of sitars for their students.

So the shop doesn’t go the way of Bombay Music, Zia taught his son Imran how to make sitars, and another son – Kashan, 20 – is learning to play and will later learn to make it too. “I think knowing how to play it will make it easier to learn how to make or repair it,” Kashan says.

“The tradition of sitar making is sacred to me. I feel blessed that my sons will continue doing it after I’m gone,” says Zia.

Imran started learning how to make sitars when he was 10. Now 25, he says he still has a lot to learn from his father, such as his incredible ear for tuning the instrument. “My father never asks me to help tune the strings. It takes a lifetime to master the skill,” he says.

To try and improve business, Imran also learned to make harmoniums, tanpuras, guitars and violins, but the shop is still primarily recognised for its sitars.

Zia, the youngest of three brothers, moved to Lahore from Amritsar with his family in 1947. His father Sher Muhammad set up the shop, which Zia has run since the death of his two elder brothers. Zia has three other sons besides Imran and Kashan who are not involved in the business.

Shahzad Khalil, a professional sitar player, gets his sitar maintained at Sher’s. He says like most artists here, he bought his sitar from India because of its wider selection. He says there used to be a few shops selling sitars in the Walled City, but they either closed down or now sold only harmoniums, tablas and anklets.

“Some make replicas for decorative use only,” Imran says.

Sarwat Ali, who heads the musicology department at the National College of Arts, says the shop makes good quality sitars. He said a lack of skilled craftsmen as well as players meant it was unlikely to pick up as a business. “They are export quality instruments. But India has a much bigger and established market,” he said.

Rakae Jamil, a young sitar player and teacher at Aitchison College, said he did not believe there was a strong future for the sitar in Pakistan. “There are few serious players,” he says. “Most beginners quit after a while.”