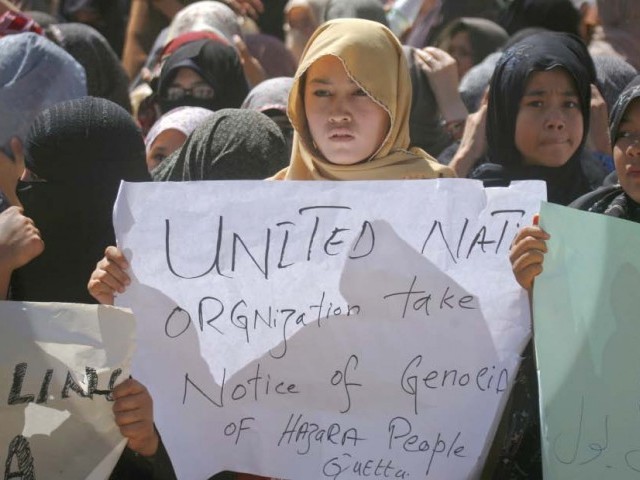 Ethnic Hazara women hold placards during a demonstration in Quetta on September 21 to condemn the attack. PHOTO: REUTERS

Balochistan High Court Chief Justice Qazi Faez Isa on Thursday took suo motu notice of the Ganjidori incident in which 26 Shia pilgrims were killed in an attack on a passenger bus on September 20. The hearing will begin on September 26.

The chief justice took note of the incident following appeals from civil society members after reports on the incident were published in local and national media. The passengers were forced to disembark the bus and were shot dead in cold blood. The court observed that the incident has spread terror among the people of Balochistan and traumatised a segment of society.

Meanwhile, the Balochistan government has decided to form a wing of the Anti Terrorism Force (ATF) exclusively to provide security cover to the Hazara community in Quetta.

The decision was taken following the targeted killing of 26 pilgrims in Mastung. Anti-Terrorism Force (ATF) personnel and police with anti-terrorism training will be recruited for the wing.

Hazara Town and Marriabad are two Hazara populated townships in the provincial capital where the government has decided to deploy the special force.  “It has been observed that the Hazara community is being subjected to targeted killings and bomb blasts, thus the government has decided to provide them adequate security,” said Balochistan Home Secretary Naseebullah Bazai.

Shia Muslims usually travel from Quetta to Iran through private transport companies and mostly without any security cover. “It is unfortunate that the killings have intensified. Therefore, the government is compelled to adopt strict security measures,”  Bazai added.