On the Afghan frontline, US soldiers see longer war ahead

On the Afghan frontline, US soldiers see longer war ahead 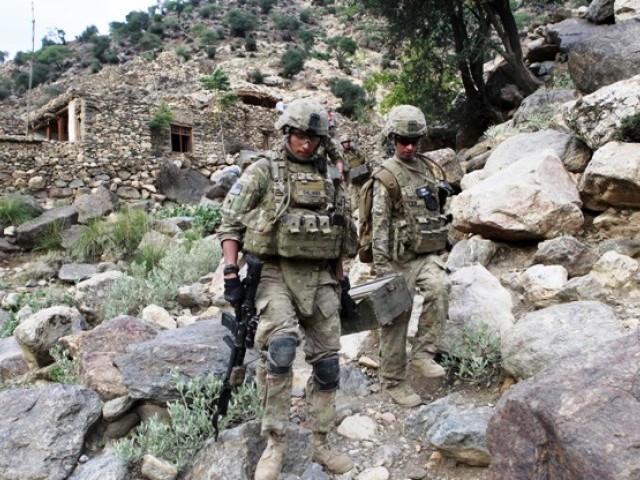 U.S. soldiers from Task Force Bronco, 3rd Squadron, 4th Cavalry carry boxes of ammunitions confiscated from a house during a patrol to search for arms caches, in a village in Nangarhar, Afghanistan September 8, 2011.

KUNAR: US soldiers deployed on the rugged mountains of eastern Afghanistan say the war isn’t going away for another ten years, even after Washington pulls troops from a country locked in a deadly insurgency.

With failing public support for the war, US President Barack Obama has announced a plan to gradually draw down the 100,000 troops in Afghanistan and hand over all security responsibilities to Afghan forces by the end of 2014.

But ten years after the Sept. 11, 2011 attacks, which brought US forces to Afghanistan, the country still faces a Taliban insurgency that the world’s formidable military has been unable to quell.

For Captain Dan Mizak of the 27th Infantry Regiment from Cumberland, Maryland, deployed in Kunar on the violent border with Pakistan, the war in Afghanistan is far from over.

“I think one way or another the war is probably going to go on for another ten years,” Mizak said.

“These people have been at war in this country for years and I think eventually, you know, we’re going to leave but I think there’s still going to be fighting going on. So, that’s the way I feel about that.”

Ten years ago, Mizak was an 18-year-old private in the US army and now he’s a captain doing the same thing he was trained to do back then, he said. Many others are on their third or fourth tour of duty.

“I don’t think it’s a traditional war where you can measure it on battles, but certainly I think we’re doing something right when we got Bin Laden, and we’re chipping away at the al Qaeda network, so I think we’re making steps in the right direction to win the war on terrorism.”

Months after al Qaeda leader Osama bin Laden was killed in Pakistan in a raid by US Navy SEALS, violence is still at its worst levels in Afghanistan, with a resurgent Taliban insurgency taking the heaviest toll on both foreign forces and civilians.

While the Taliban has been pushed out of some areas of its southern heartland, the insurgency has intensified along Afghanistan’s eastern border with Pakistan.

Remote Kunar with its steep mountain valleys, where Bin Laden once had his base, has become the more active front of the war against the Taliban.

The area is used by insurgent fighters as an infiltration and smuggling route from Pakistan, which is just over the mountains to the west. The United States had largely pulled out of Kunar a year ago, focusing the war effort on the southern base of the Taliban, but it has since added troops.

“After 9/11, I had an idea that it was going to be a long, hard campaign. These smaller wars, these savage little wars of peace tend to go on for a long time. They’re not as quick and clean as America generally likes them to be,” said Captain Tim Blair of the 22nd Infantry from Long Island, New York.

The nature of the enemy was such that the war could go on for a long time with varying intensity. If the United States is to be kept safe, then its soldiers had to go out and take the fight to the enemy.

“I’ve always kind of thought of the Afghanistan operation as kind of one of those bug lights or lamps that you put on your front porch during the summer months to help prevent the bugs from getting into the house,” said First Lieutenant Edward Bachar from Freehold, New Jersey.

“You know, and that’s the way I think of our efforts here. We take care of the bad guys in their backyard so the people in the United States don’t have to worry about it.”

US officials said on Thursday there was a “credible but unconfirmed” threat ahead of the 10th anniversary of the Sept. 11 attacks. It involved Washington DC and New York, which were targeted in al Qaeda attacks a decade ago.

Kevin Henderson, a staff sergeant from Palestine, Texas, said Americans had gone back to thinking they were invulnerable, but that was a mistake.

“And people in the United States and the world alike need to keep their eyes open and realise that this could happen over and over and over again. And it could be a lot worse.”

But Joel Valette, a staff sergeant from California, who was in his fourth tour of duty in Afghanistan, said it was time to wind down, now that most of the objectives had been meet.

“I just. I don’t agree with us staying here for another ten years. Because to me, it’s pretty much useless since what we came here for we already accomplished.”

Dengue on the rise: Over 1,958 cases reported