Shoulder to shoulder: Confessions of a perfect ‘Qaddafi-girl’

Shoulder to shoulder: Confessions of a perfect ‘Qaddafi-girl’ 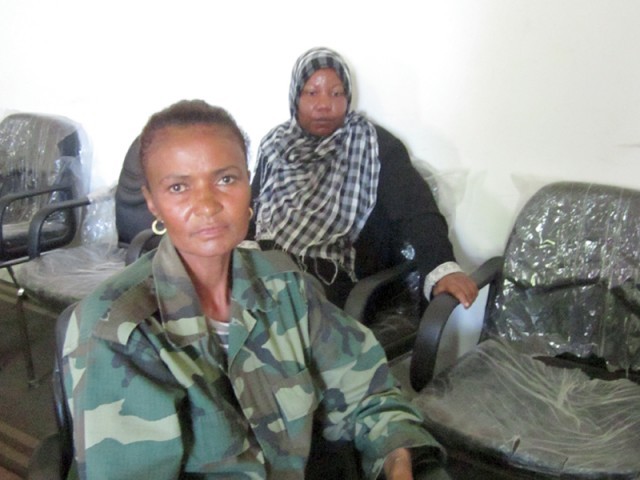 As the door opens to a poorly-lit room at the new rebel headquarters in the western Libyan town of Zawiya, three guards enter with a female prisoner of war (PoW). Tall and thin, the woman wears a blue scarf and is dressed in military uniform.

As she is ordered to take a seat, two Kalashnikov-carrying male guards take position at a distance of five metres, while an unarmed female guard sits immediately behind the PoW, who by now has removed her scarf.

The name of the uniformed woman is Aisha Abed El Salaam Ali. And she is not your average Arab woman.

Ali, who holds the rank of lieutenant-colonel, was one of the highest ranking female officers in the Libyan army, as well as a member of the Revolutionary Guard. Until recently, she was responsible for the world famous group of female bodyguards who protected former Libyan leader Muammar Qaddafi.

Ali, who is unmarried and hails from the town of Traghan in south Libya, joined Qaddafi’s army in 1984.

She was captured by rebels last week, following heavy fighting in Zawiya, 50 kilometres southwest of Tripoli.

This is the first time she has spoken to a newspaper.

“There were three permanent bodyguards,” Ali recalls, while her guards keep an eye on her. “They would travel with Qaddafi to many destinations.” But on every foreign trip, Ali explains, Qaddafi wanted an additional four female bodyguards. “I would choose those girls,” Ali says, “The women would be very excited if they were picked for a Qaddafi trip.”

When asked what makes a woman a perfect ‘Qaddafi-girl’, she replies: “They all had to be army officers. They must be tall, because they would stand behind Qaddafi.”

Beautiful? “Not necessarily,” she says, “With a little make-up, every woman can look pretty.”

“I never accompanied him outside Libya, but I was his bodyguard during a trip to the town of Sirte,” she says.

The story goes that Qaddafi wanted to be protected exclusively by women after having watched one too many James Bond movies. But Ali claims the real reason is more ‘down to earth’. “Qaddafi wanted to show that Libyan women had equal rights to their male counterparts.”

Ali herself was captured during heavy fighting in Zawiya, where her unit was dispatched after they lost all communication with Qaddafi.

“We had long lists with names of opposition members,” she says, “It was my job during the last six months to interrogate people we suspected of rebel activities…We never thought it was possible we would lose this war.”

But on one recent morning, she and her comrades heard the battle cry ‘Allah-u-Akhbar’, from nearby. “We…panicked,” she recalls.

Ali now regrets she fought for Qaddafi. “I have to admit the rebels treated me better than I treated them,” she says, adding: “I can only hope for their forgiveness.”