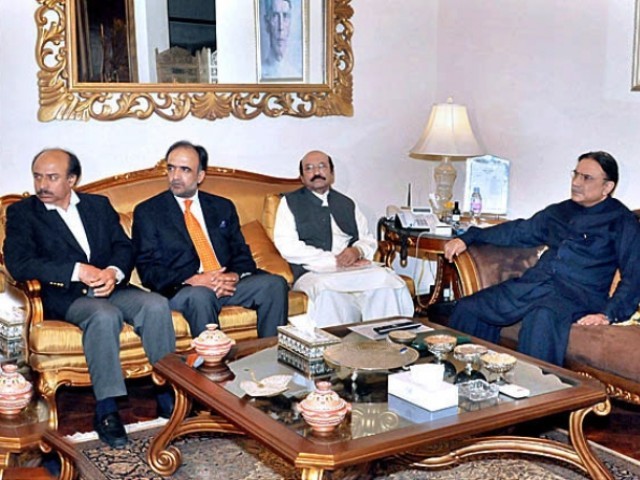 The ruling Pakistan Peoples Party on Monday disavowed the statements of former Sindh senior minister Zulfiqar Mirza, calling them ‘unacceptable’ and ‘a violation of party discipline’, though the party leadership stopped short of announcing any punitive actions against Mirza.

President Asif Ali Zardari, in his capacity as PPP co-chairman, had called a meeting of PPP leaders from Sindh to discuss the fallout from the fiery diatribe that Mirza had launched against a member of his own party – Federal Interior Minister Rehman Malik – as well as the Muttahida Qaumi Movement.

“The party leadership disowned the accusations made in the press conference by Zulfiqar Mirza in Karachi on Sunday,” said Farhatullah Babar, the president’s spokesperson, after the meeting.

Mirza is considered one of President Zardari’s closest associates, having on several occasions referred to the president as a ‘close personal friend’. Opponents of the PPP have, in the past, assumed that statements made by Mirza were being made on behalf of the president.

But the explosive rant by Mirza on Sunday took most observers by surprise, especially since he announced his resignation from the Sindh cabinet, the provincial assembly and even his position within the PPP leadership, though he stated that he would remain a member of the party ‘for life’.

In an official handout made available to the press after the meeting, Mirza’s actions were termed “an unacceptable violation of party discipline and contrary to the well thought out policy of political reconciliation envisaged by Shaheed Mohtarma Benazir Bhutto.”

However, the party leadership made no mention of any possible disciplinary action against Mirza, a point that is likely to raise questions and arouse criticism from the party’s political opponents. In the past, the PPP has been known to suspend the membership of several of its cadre who have stepped out of line.

While still at odds with the MQM, in its statement the PPP leadership also reiterated its resolve to continue the process of political reconciliation, though it did not name any specific party.

“There may have been pauses in the process but there shall be no break in the purpose,” President Zardari was quoted as having said by his spokesperson. Interestingly enough, Rehman Malik and Senator Babar Awan – the two men who have been actively involved in trying to manage the negotiations with the MQM – were not present at the meeting, in an apparent endorsement of the demands made by Mirza and several other PPP politicians from Sindh that these two men not be allowed to intervene in the affairs of the province again.

The two men were replaced at the meeting by Religious Affairs Minister Syed Khursheed Shah (an MNA from Sukkur) and Qamar Zaman Kaira, an MNA from Gujrat.

The Sindh chief minister, meanwhile, briefed the meeting about the ongoing drive against those responsible for the recent wave of violence in Karachi that has thus far claimed the lives of nearly 1,000 people since the beginning of the calendar year.