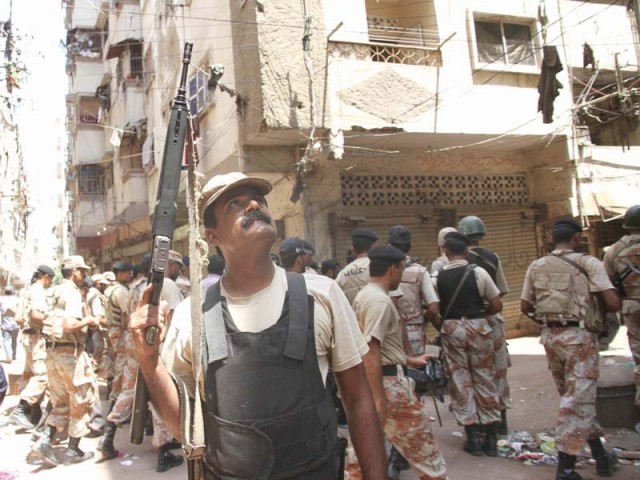 Rangers personnel wrapped up an eight-hour scouring of the now-defunct Peoples Amn Committee’s (PAC) strongholds in Lyari by unearthing two torture cells and bringing in a haul of 133 suspects along with a huge cache of arms and ammunition.

Almost 3,000 Rangers officers, including its Anti-Terrorism Squad and commandos, set out early on Sunday and trekked through Nayyabad, Baghdadi, Eidu Lane, Nawa Lane and Khadda Market and had surrounded the areas at 6 am.

For the second time, people tried to prevent the Rangers from ‘silently operating’ through Lyari by gathering on the streets and making announcements from mosque loudspeakers. A man and two women, Nasreen and Zahida, were injured as unidentified armed men opened fire at the protesters.

However, Rangers continued their work and blocked the entrance and exit routes. No one was allowed in without being thoroughly searched while snap checking was also stepped up with Nayyabad and Baghdadi as the centre of focus.

“We were just about to take a nap after our Fajr prayers when there was a loud announcement that the Rangers were conducting an operation and everyone took to the streets,” said a resident. “Like always, the residents who were not involved kept the Rangers busy with their protests and all the ‘gangsters’ managed to hide.”

According to an official handout issued late on Sunday night, a total of 133 suspects were taken into custody while Rangers have seized 110 weapons and three hand grenades. However, the identities of the suspects were not disclosed.

They discovered automatic weapons and ammunition that were hidden in a ditch inside a house. They found rockets, grenades, nine sub-machine guns and hundreds of bullet rounds once they dug out the makeshift arsenal.

The torture cells were found a small distance apart in the Nayyabad area, said Sachal Rangers Head Brigadier Waseem Ayub. One was underground while the other was on the first floor. Both were outfitted with chains, chairs, tape for gagging victims, ropes, and power tools to dismember bodies. Jackets, sacks and documents were strewn on the floor along with the uniform and cap of the Khidmat-e-Khalq Foundation in one of the cells.

The Rangers credited their finds to information provided by their intelligence departments but made it clear that the operation is far from over and would continue until peace is completely restored. At the moment, the Rangers’ pressing concerns include how long these cells have been running, how many remain and who runs them. At the moment the suspicion falls on the PAC as the area is their territory. The authorities also need to find out how many hostages have been brought there to be killed, and who they are.

These are not the first such cells discovered. The police have previously found a cell believed to be run by one of the PAC’s rival groups. At least 13 people were killed in the cell found in Bheempura – Akram Baloch’s turf.

Former PAC leader Zafar Baloch, told The Express Tribune that the Rangers have apprehended over 100 former PAC activists during the operation. He also said that the footage released by Rangers of people being tortured in these cells was fake and was part of a conspiracy against them.

Wikileaks revelations: US was concerned about release of terrorists, Karachi port security