IT sector records sluggish growth at 5%

The World Bank has approved funding of $1.7 billion for the rehabilitation of flood-damaged homes and infrastructure in Sindh, covering slightly over one-fifth of the post-flood cost in the province.

At what the authorities called a “Pakistan Day” at the World Bank Board, the Washington-based lender approved five different projects for the rehabilitation and reconstruction needs of the province. Pakistan Executive Director at the World Bank, Naveed Kamran Baloch played a crucial role in securing the support of the United States and the European nations in voting for the loans.

The World Bank’s Board of Executive Directors approved $1.692 billion in financing for five projects to support people living in the flood-affected areas of Sindh, according to a statement issued by the lender’s local office on Tuesday.

Three of the projects support rehabilitation, housing reconstruction and the restoration of crop production for vulnerable communities, while the other two projects support mother and child healthcare services, according to the lender. For Sindh, the overall needs assessment for post-flood recovery and reconstruction stands at $7.9 billion, the highest among all provinces. The approved funds will cover about 22% of the total cost. Earlier, the government had rushed through the approval process and ended up violating the Public Finance Management Act of 2019, also enacted on the World Bank’s advice. The Post Disaster Need Assessment Report has estimated the cost of housing or settlements in Sindh to be at $4.3 billion, water resources and irrigation infrastructure at $442 million, transport and communications at $311 million and water supply, municipal services, and community infrastructure at $421 million.

According to the project documents, Sindh has a population of approximately 50.4 million, or nearly one-fourth of the country’s population, and generates 27% of Pakistan’s GDP. Nearly half of Sindh’s population lives in the rural areas and about 37% of the rural population lives below the poverty line, which is higher than the Pakistan average. Poverty rates are much higher in some flood-impacted districts, reaching 53.4% in Badin, according to the World Bank project documents. Satellite and survey data suggest that even within tehsils, poorer areas are more likely to be affected by the floods. Beyond monetary and non-monetary poverty, Sindh’s flood affected areas showed some of the highest stunting rates in the country, reflecting limited access to sanitation and safe water facilities. 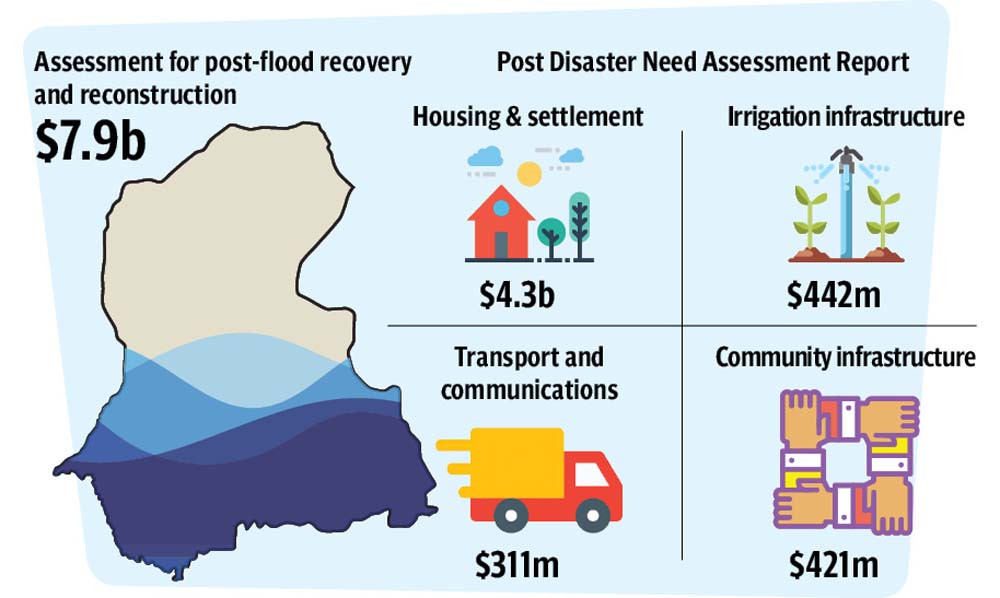 Sindh was one of the worst-affected provinces in the 2022 floods. Damage ranged from housing and health to agriculture and livelihoods. “Beyond the rehabilitation and reconstruction of the damaged houses and infrastructure, our engagement in the flood response effort is an opportunity to strengthen resilience, and reform institutions and governance structures,” said Najy Benhassine, the World Bank Country Director for Pakistan.

The World Bank has approved a $500 million loan for the Sindh Flood Emergency Rehabilitation project aimed at rehabilitating damaged infrastructure, providing short-term livelihood opportunities, and strengthening the government’s capacity to respond to disasters.

The project will help restore and improve critical irrigation and flood protection infrastructure, water supply schemes, roads, and related infrastructure. It will also benefit at least two million people in the most flood-affected districts, approximately half of whom are women, with restoration and resilient reconstruction of critical infrastructure.

A community-level cash-for-work programme will provide short-term income support to approximately 100,000 households. This will include semi-skilled and unskilled labour, and will support livestock restocking for smallholder farmers affected by the floods.

Another loan of $292 million has been approved for the Sindh Water and Agriculture Transformation project to increase agricultural water productivity, improve integrated water resources management, and restore crop production. More than 885,000 households are expected to benefit from the project. As an immediate response to the floods, the project will provide cash transfers to 800,000 flood-affected farming households to help them restore crop production through the purchase seeds, fertiliser, and other critical inputs. The lender also approved a $200 million loan for the Sindh Strengthening Social Protection Delivery System project and 200 million for the Sindh Integrated Health and Population Project to improve both the quality and utilisation of basic reproductive, maternal, new-born, child and adolescent health and nutrition services.