The appreciation is still loud! Ms. Marvel, which featured Pakistani bigwigs Fawad Khan, Samina Ahmed, Mehwish Hayat, and Nimra Bucha, has reached another milestone. The show’s cast will receive the Critic Choice Association’s (CCA) Ensemble Award for Television for their performances in the show.

Following its special awards shows such as The Celebration Of Black Cinema & Television, which will be celebrating its fifth anniversary in December, and The Celebration Of Latino Cinema & Television, which will see its second annual event later in November, the Critics Choice Association (CCA), on Thursday, announced it will be honouring established and emerging Asian Pacific Cinema and Television at a new, standalone event this awards season.

Proud of the series going places, director Sharmeen Obaid-Chinoy shared the news on her Instagram with a sticker that said “Bravo”. 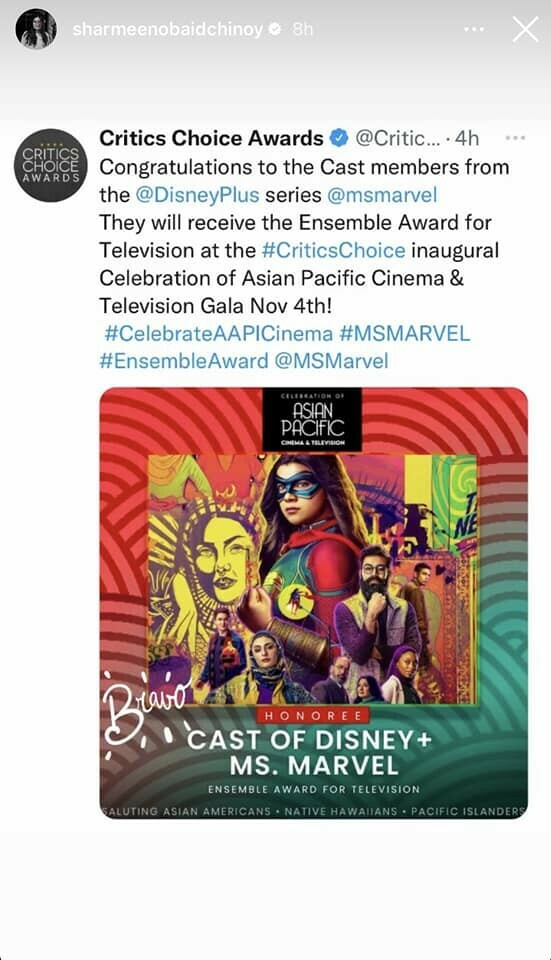 Delighted by the news, actors Zenobia Shroff and Mohan Kapoor, Ms Marvel’s parents in the show, also re-shared it on Twitter.

According to the Hollywood Reporter, the Celebration of Asian Pacific Cinema and Television, first announced in July, will take place on November 4, as per the outlet, at the Fairmont Century Plaza in Los Angeles.

Apart from Ms. Marvel’s cast, the award-winners include Squid Game director Hwang Dong-hyuk, actor Park Eun-bin who played Woo Young-woo in the Netflix series Extraordinary Attorney Woo and actor James Hong for his performance as Gong Gong in the film Everything Everywhere All at Once.

Ms. Marvel was a mini-drama series that was based on the comic of the same name and highlighted the story of a Pakistani-American teen superhero exploring her powers whilst learning about ancestral roots. The 1947 Partition of India, a tragedy that left many traumatised, is also shown in one of the episodes.