Bilawal claims Imran's anti-corruption campaign served to hide his own

The Pakistani rupee on Wednesday made an all-time high recovery of Rs9.98 in a single day and closed at a three-week high of Rs228.80 against the US dollar in the inter-bank market.

In percentage terms, it regained by a multi-year high of 4% in the day.

A global new agency and a domestic research house, however, differed whether the gain in percentage terms was of five-year high or over two-decade high after 1999.

Experts said the rupee saw its first major recovery after a gap of over three months after the government had reported a massive drop in import payment. In addition, they added, the International Monetary Fund (IMF) had also acknowledged Pakistan meeting all the prerequisite conditions for its multibillion dollar programme.

The grave developments turned exporters to panic and throw their "withheld" supplies of dollars into the market.

The increased supply of dollars in comparison with the prevailing demand in the market-based exchange rate system helped the rupee to win the much-needed support against the greenback.

The rupee had closed at Rs238.38 against US dollar on Tuesday, according to the State Bank of Pakistan’s (SBP) data.

With the latest massive recovery, the rupee has cumulatively regained 4.64% (or Rs11.14) in the past four consecutive working days to date.

The historical high recovery in the rupee was recorded on the day the central bank reported that it had "enhanced monitoring of foreign exchange operations of exchange companies [currency dealers] and banks."

"On Tuesday [August 2, 2022], [the] SBP suspended the operations of four branches of two exchange companies (namely) Galaxy Exchange Co and Al-Hameed International Money Exchange Co for violation of [its] regulations. 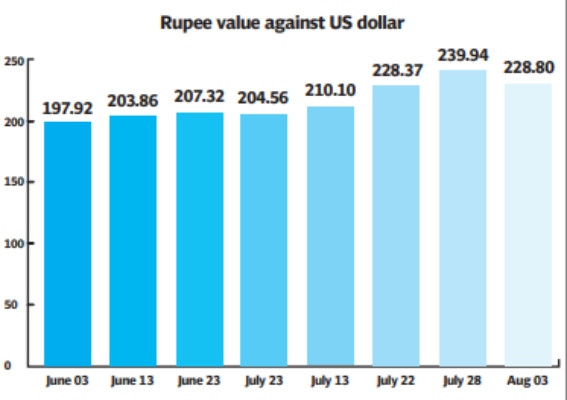 The experts said the rupee recovered after Pakistan reported that its trade deficit had reduced by almost half to $2.64 billion in July compared to $4.96 billion in June.

The significant reduction in the trade deficit was achieved on the back of a cut in imports, resulting in less demand for the greenback in the local market.

The IMF has also announced that Pakistan had met all prerequisite conditions for the revival of its loan programme.

Finance Minister Miftah Ismail had stated that the IMF Executive Board was scheduled to meet on August 24, and it would consider giving final approval for the resumption of the programme.

The approval would be followed by the receipt of the next loan tranche of $1.2 billion.

The much-awaited revival would help boost forex reserves, as the programme would also unlock inflows from other multilateral and bilateral creditors.

Topline Securities' analyst Umair Naseer said foreign exchange reserves held by the SBP were down 13% to $8.6 billion as of July 22, 2022 from $9.8 billion in June 2022, taking import cover to less than two months.

The improvement in import numbers reported by the Pakistan Bureau of Statistics (PBS) and the statement from the IMF eased pressure in the currency market and curbed fears on further deterioration in external account, he added.

IMF’s Resident Representative for Pakistan Esther Perez Ruiz confirmed on Tuesday that Pakistan had met its last prior action, in a statement sent to the media.

"Pakistan has fulfilled the preconditions for the seventh and eighth joint review by increasing the PDL (petroleum development levy) on July 31," the statement quoted Ruiz as saying.

Naseer said this statement had helped reduce fears of delay in the IMF programme.

The foreign exchange reserves of $8.6 billion still remain low. However, the analyst expected that the revival of the IMF programme and flows from other multilateral and bilateral agencies was likely to help support reserves.

"We also believe lower imports is also anticipated to curtail the current account deficit going forward [clocked in at $2.30 billion in June 2022] and will help arrest depletion in foreign exchange reserves,” he added.

Pressure on rupee to ease after IMF deal

No let-up in rupee’s slide