Temperatures topped 40C for the first time, igniting fires that destroyed dozens of properties in the capital

At least 13 people have died in Britain while swimming during a spell of record-breaking hot weather that sparked wildfires, damaged train tracks and triggered warnings that efforts to tackle climate change needed to be stepped up.

The London Fire Brigade endured its busiest day since World War Two on Tuesday when temperatures topped 40C (104 Fahrenheit) for the first time, igniting fires that destroyed dozens of properties in the capital and torched tinderbox-dry grassland at the sides of railway tracks and roads.

"We've got nothing, everything's gone," Timothy Stock, a resident who lost his home to fire in the village of Wennington, east of London, told the BBC.

Thirteen people lost their lives after "getting into difficulty in rivers, reservoirs and lakes while swimming in recent days — seven of them teenage boys," British minister Kit Malthouse told parliament on Wednesday. 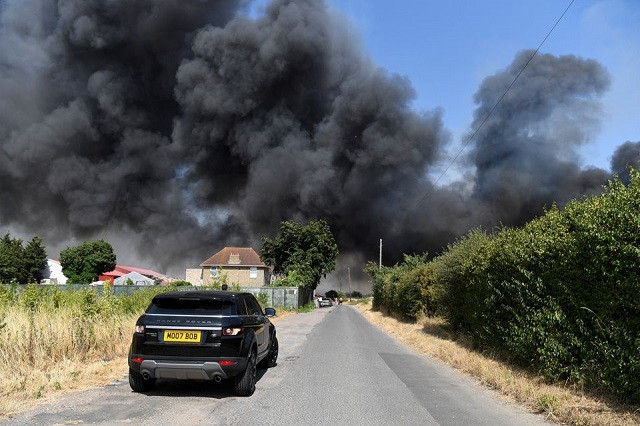 A car drives near a fire that burns during a heatwave, in Rainham, east London, Britain, July 19, 2022. PHOTO: REUTERS

At least 41 properties were destroyed in London and more than a dozen elsewhere in Britain, Malthouse said.

Many trains heading from London to northern England were delayed or cancelled on Wednesday after the heat from fires buckled heavy train tracks, while signalling equipment and overhead lines were also damaged.

Forecasters predicted a much cooler day on Wednesday, with outbreaks of rain later.

A glimpse of the future?

Britain's government has defended its record on the environment, touting its decision to move to a net zero status, but ministers have admitted it will take years to upgrade its infrastructure to cope with the heat.

"The sad reality is this is what the future for London and the UK is likely to look like if we don't take strong action now on the climate crisis," said London Mayor Sadiq Khan, a member of the opposition Labour Party.

The Met Office's Chief of Science and Technology Stephen Belcher said that unless greenhouse gas emissions were reduced, Britain could see similar heatwaves every three years. 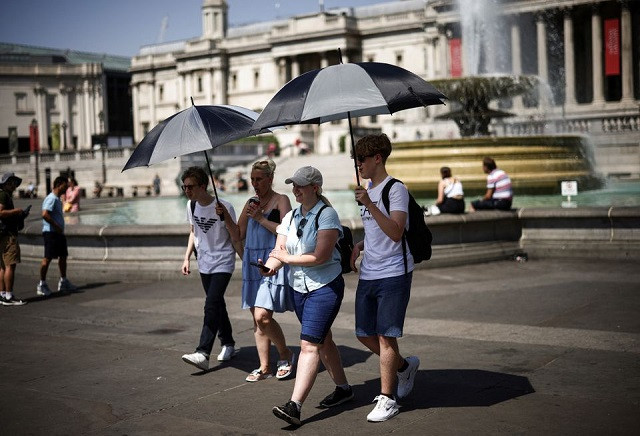 People carry umbrellas to hide in their shadow during a heatwave, at Trafalgar Square in London, Britain, July 19, 2022. PHOTO: REUTERS

At one point on Monday, two airport runways were forced to close due to damage to the surface. Power companies faced outages as the heat scorched their equipment, many schools closed early and zoos struggled to keep pets cool.

"This is a reminder today, I think, of the importance of tackling climate change because this is a remarkable unprecedented event," Treasury Minister Simon Clarke said.

Khan praised the work of the fire brigade after it received 2,600 calls for help, compared with a normal daily average of 350. The London Ambulance Service received 400 calls an hour from people struggling with heat exposure, breathing difficulties, dizziness and fainting.

"The problem is we've not had rain in the entire month of July in London," Khan told BBC Radio. "The grass is like hay, which means it's easier to catch fire and once it catches fire it spreads incredibly fast."

Amid heatwave, 'exhausted' birds falling from sky in India

Crunch time for power grid as Japan's heatwave gets even hotter