The Pakistan Tehreek-e-Insaf (PTI) won the race for the coveted Punjab battlefield hands down on Sunday, clinching 15 provincial assembly seats out of the 20 up for grabs and dealing a stunning blow to the 13-party alliance led by the Pakistan Muslim League-Nawaz (PML-N) on its home turf.

According to unofficial and preliminary results, the ruling Pakistan Muslim League-Nawaz (PML-N) could only bag four seats, including Malik Asad Ali Khokhar and Fida Hussain from PP-168 Lahore and PP-237 Bhawalnagar, respectively.

Syed Muhammad Rafi Uddin was the only independent candidate, who managed to secure a seat – PP-228 Lodhran – with a lead of 6,473 votes. PTI’s Izzat Javed Khan was runner-up with 22,802 votes.

The rest was all PTI.

I want to thank the people of Multan for standing by PTI when the odds were stacked against us.This isnt my victory,it's the peoples victory. You have the power to change Pakistan's destiny, don't ever forget that & dont every give up! Imran Khan's narrative has won. pic.twitter.com/krxjR5r2Pz

As results coming in PTI is winning in atleast 15 seats. But it is very important for all our people on duty in all polling stations not to leave their posts till official results have been obtained from the Returning Officers.

Shabir Ahmad also won PP-167 Lahore seat for the PTI by securing 25,590 votes. PTI’s Nazir Ahmad Chohan who dissented from the party could manage to get 16,537 votes despite using all means.

PP-170 Lahore was also won by the PTI’s Malik Zaheer Abbas who got 18,717 votes against PML-N’s Muhammad Amin Zulqarnain who bagged 11,501 votes.

The PTI workers, supporters and voters poured onto the streets to celebrate the huge triumph. They gathered outside PTI Lahore office and brought out rallies in different parts of the provincial metropolis. They chanted slogans and danced on the beat of party anthems.

Thank you Lahore for giving PTI 3 out of 4 seats! #ہوگئی_انصاف_کی_جیت pic.twitter.com/6USMMDMcEM

Earlier, the elections by and large remained peaceful with sporadic incidents of clashes between the activists and supporters of rival parties. At least one person died in Shiekhupura while several others were injured in sundry incidents. 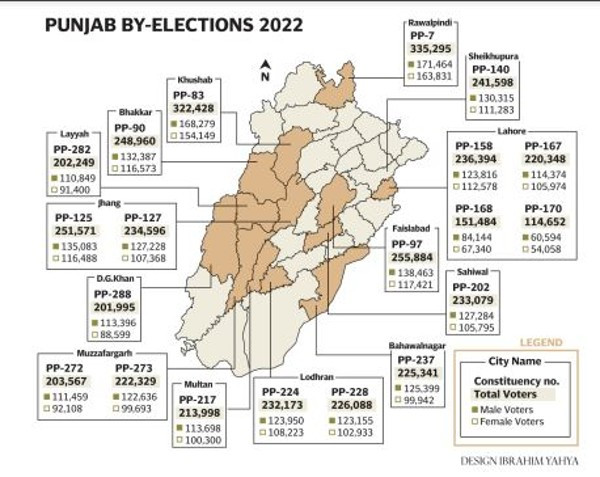 Contrary to the trend of all previous by-elections, a record turnout was witnessed in the polling, despite several complaints of anomalies in the voting lists. The record of previous by-elections indicates that normally 25-30% voters exercise their right to vote. However, in Sunday’s by-polls over 40% voters cast their ballot.

The polling started at scheduled 8:00am and continued without break till 5:00pm. Great enthusiasm was seen among voters as a large number of people reached polling stations to cast their vote for their favourite candidates despite it being a weekend holiday.

The jump comes as the rupee nosedived to a new all-time low of Rs268.30 against US dollar on Friday

Despite ban on entry, PTI leader reaches Lahore ahead of by-poll

WATCH: 'Votes on sale' on eve of crucial Punjab by-polls

Rashid urges 'establishment' to 'stay away' from Punjab by-polls

CCTV cameras to be installed at sensitive polling stations