Move over Anushka Sharma and Virat Kohli - there's a new actor-cricketer couple in town! Bollywood actor Athiya Shetty and Indian cricketer KL Rahul had often made headlines. The duo has been spotted on numerous occasions together earlier, and rumours of the couple getting married in three months were rife! However, Athiya has now taken to social media and has refuted such claims.

Athiya wrote on her Instagram Stories, “I hope I’m invited to the wedding that’s taking place in 3 months. Lol.” 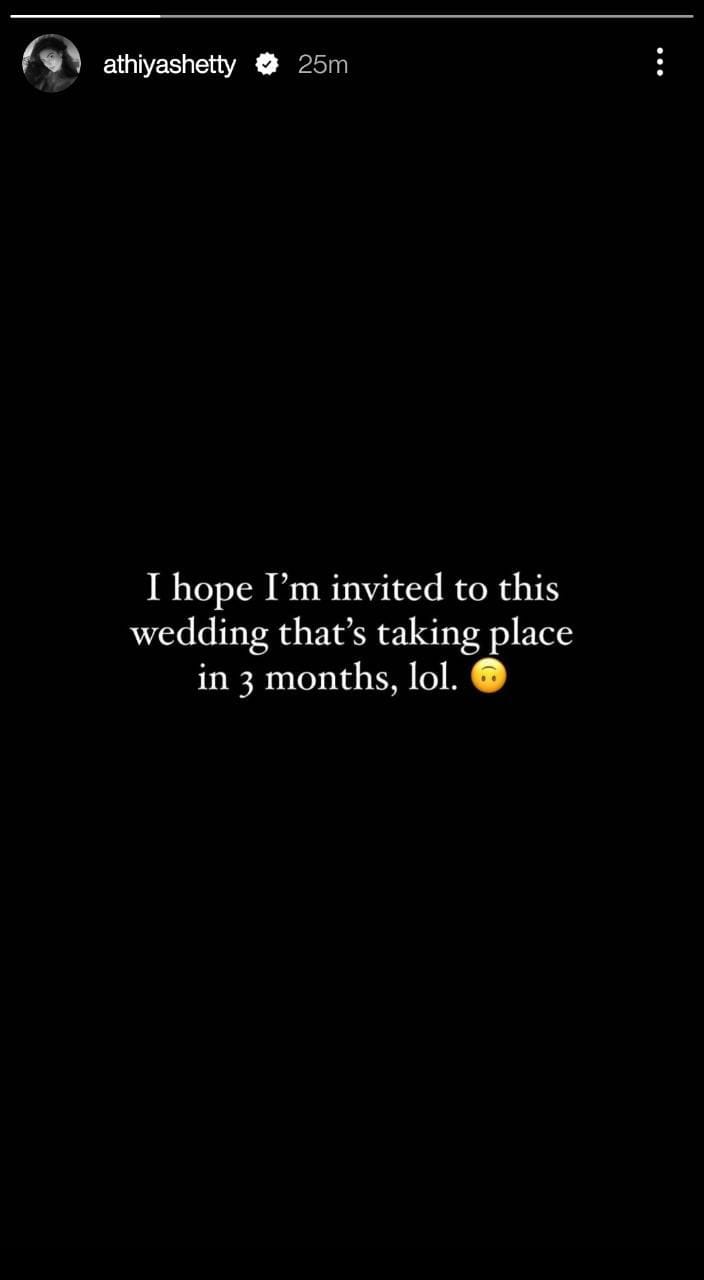 According to the Times of India, a report shared that the couple will get married in a south Indian wedding.

It said, “Rahul’s parents were recently in Mumbai to meet Athiya’s family. The couple, along with their families, visited the new house where they will be moving in soon, to see the progress. The wedding is expected to take place in the next three months in Mumbai. It will be a grand celebration for both the families and every detail of the wedding will be overseen by the bride herself.”

Earlier, actor Suniel Shetty, father of Athiya Shetty, opened up about the couple’s marriage plan. He stated, “She is my daughter, she will get married sometime. I would want my son to also get married, the sooner the better. It’s their choice. As far as KL Rahul is concerned, I love the boy. And it is for them to decide what they want to do, because times have changed. Beti aur beta dono hi responsible hai (My daughter and son are both responsible people). I would like them to take the decision. My blessings are always there for them.”

In May, actor Ahan Shetty, Athiya’s brother, spoke about the rumoured wedding. “As far as the wedding is concerned, there are no arrangements being made. There is no such ceremony, these are all rumours. When there is no wedding, how can we give you a date?” Ahan told Dainik Bhaskar.

Athiya jetted off to Germany for KL Rahul’s treatment and the cricketer underwent hernia surgery in the country. A report also revealed that the couple will stay in Germany for about a month now until the cricketer makes full recovery.

Maryam has what it takes to lead the party: Raja Zafar