From best to worst: Deepika Padukone’s looks at Cannes 2022 ranked

Her bold, ravishing looks are etched in our minds but there are others that we wish could be erased from our memory

Deepika Padukone left us speechless (in a good and bad way!) with her sartorial choices at the 75th Cannes Film Festival. While the fashionista has set the bar high, serving some alluring looks on the Cannes red carpet over the years, fans of the Bollywood beauty had high expectations this time around too. But while she took our breath away on some days, a few of Deepika’s looks missed the mark this year, undoubtedly qualifying as major fashion fails.

Her bold yet ravishing looks are etched in our minds but there are others that we wish could be erased from our memory. Here’s a lowdown of Deepika’s best to worst looks at Cannes 2022. 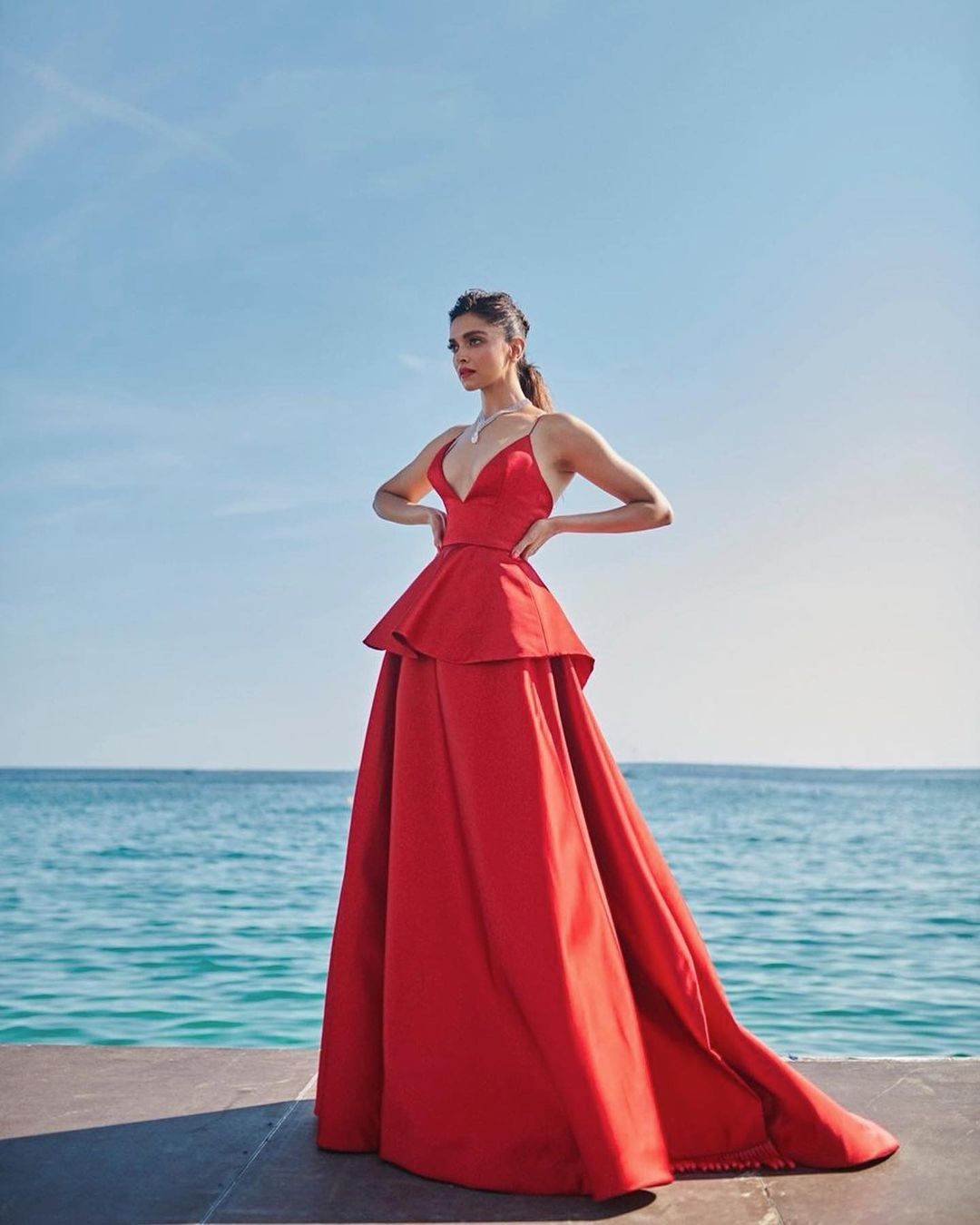 Deepika is not one to shy away from a fiery look and this cherry red gown is a testament to her boldness. A Louis Vuitton custom creation, this stunning number impressed netizens with its episodic nature, as a sleeveless peplum top cinched at the waist and extended into an elegantly draped gown. Its simple cut played a balancing act, with the look coming together with a dazzling Cartier diamond neckpiece. The lack of earrings and minimal eye makeup kept the attention on the dress. Deepika’s sleek ponytail added a contemporary element to an otherwise classic red look. 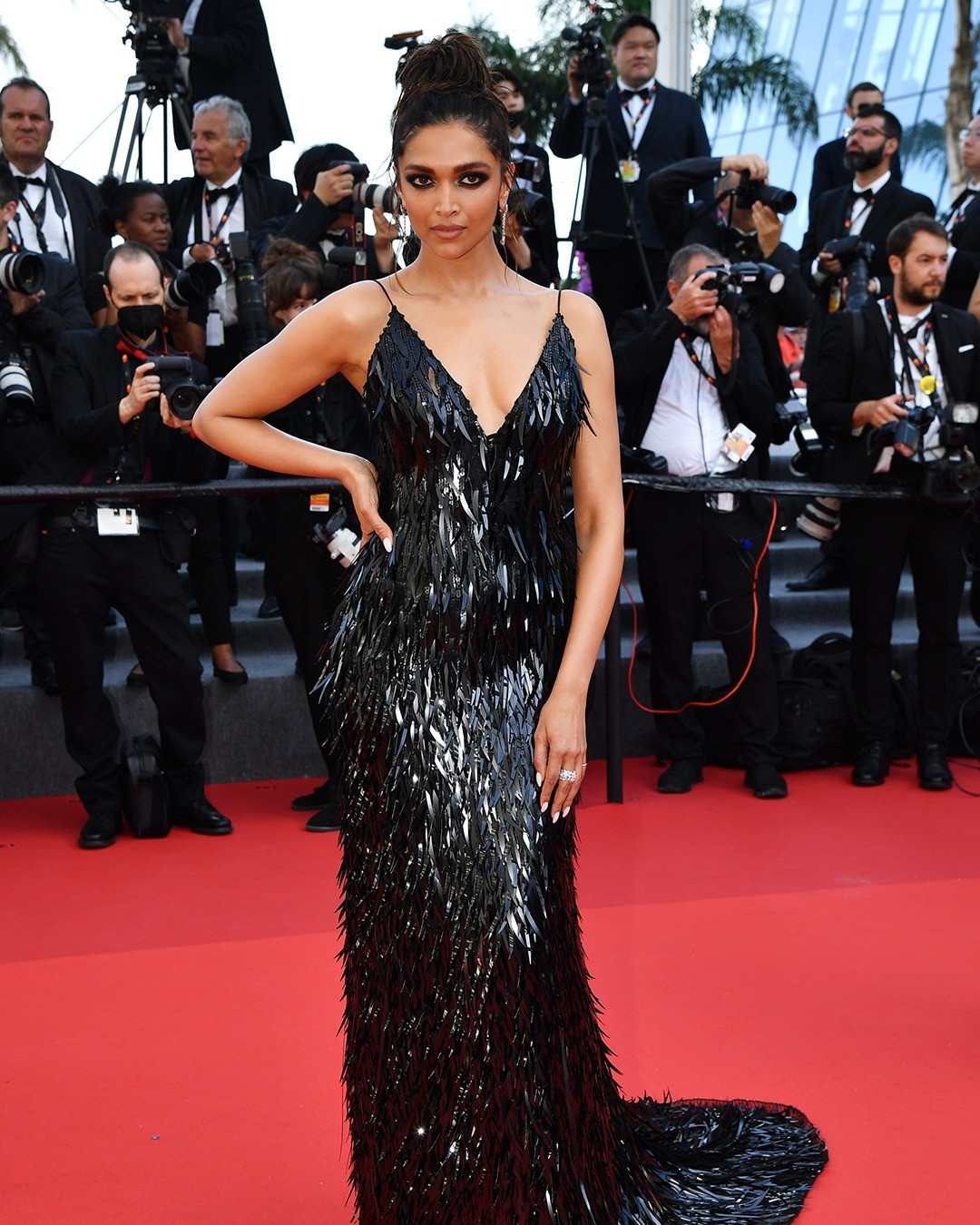 Recently titled as the first Indian Louis Vuitton ambassador, Deepika stunned in yet another outfit designed by the fashion house. The spaghetti strapped, classic black, bodycon dress was covered in glistening feathers and left netizens in awe. The simple dangling, diamond earrings complimented the intricacies of the dress, while the messy updo added an effortless flair to the look. Her makeup artist, Sandhya Shekar, outdid herself with the smoky eye look! 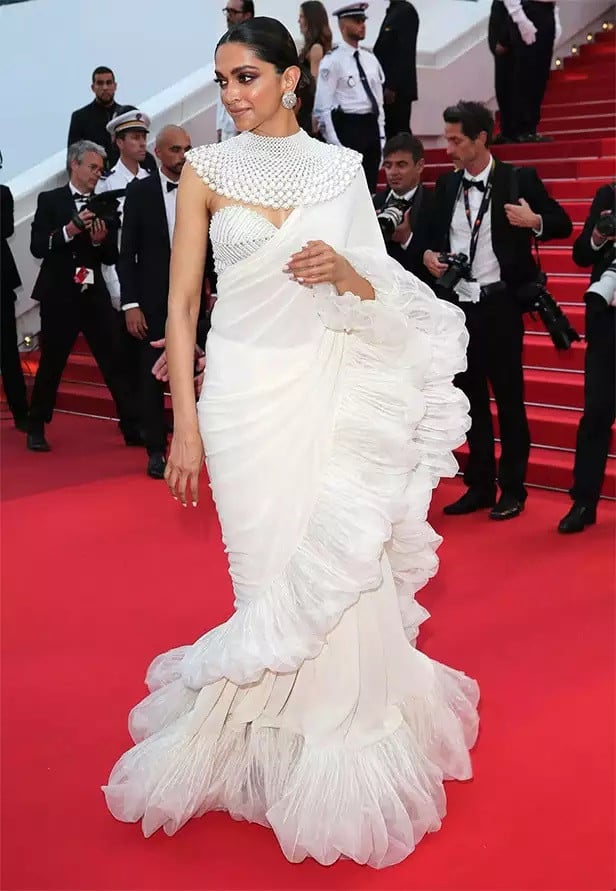 The actor checked out of the film festival in the most elegant fashion, donning a divine, off-white Sandeep Khosla saree. A modern take on the traditional garment, the garb featured a white pearl collar that extended all the way down her décolleté. The saree, adorned with pleated ruffles and a trail, was paired with a bustier embellished with pearls and crystals. A low bun, coupled with heavy, diamond and polki Birdhichand earrings, and minimal makeup completed the look. 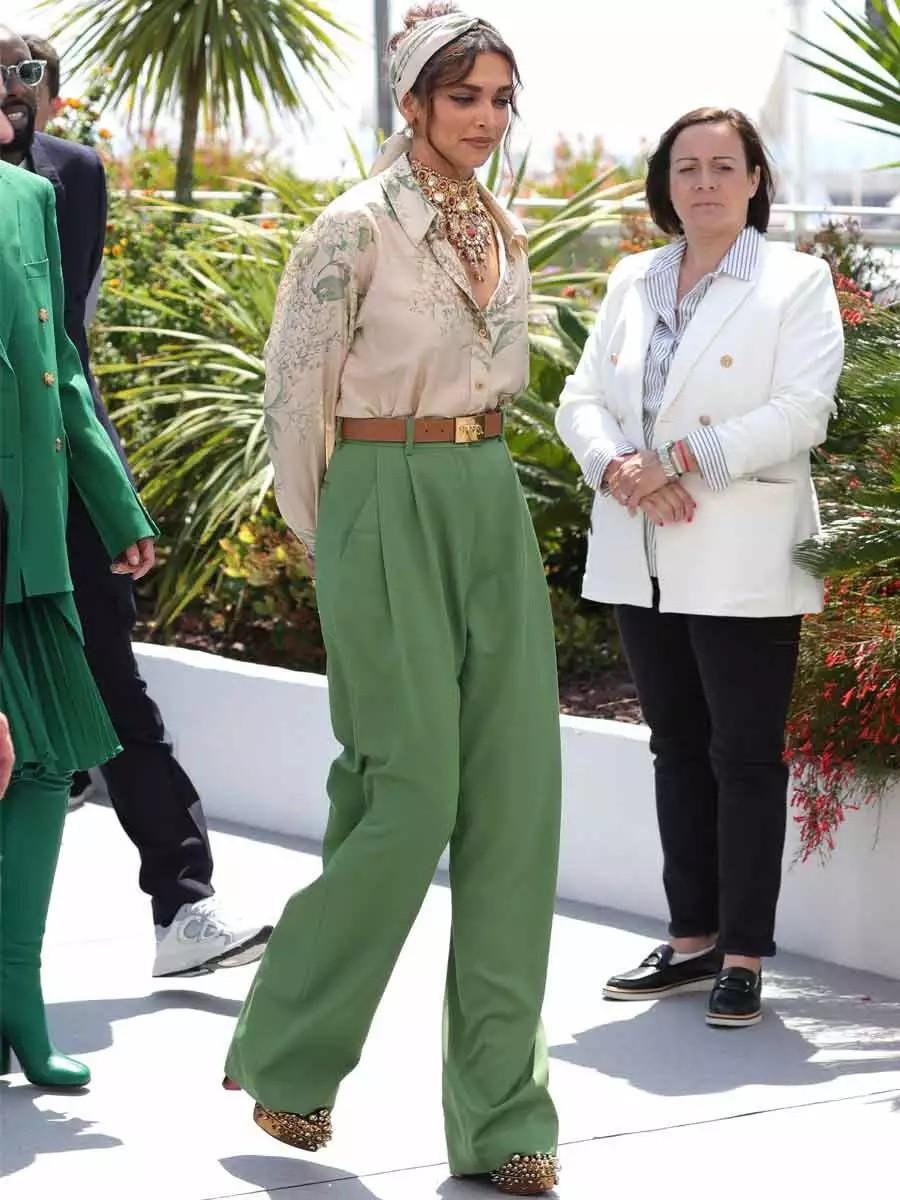 Deepika knocked it out of the part in this Sabyasachi pant suit from their Tropic of Calcutta collection, adding a contemporary update to Indian heritage. The full sleeve silk shirt with Sabyasachi monogram buttons was paired with green, wool pants that were belted at the waist with the Bengal Trophy belt. The star of this outfit was the actor's heavily jewelled necklace that was engraved with Arabic writing and an homage to Indian heritage. The outfit was accessorised with diamond earrings, a wrist watch and a matching silk head scarf and golden heels. 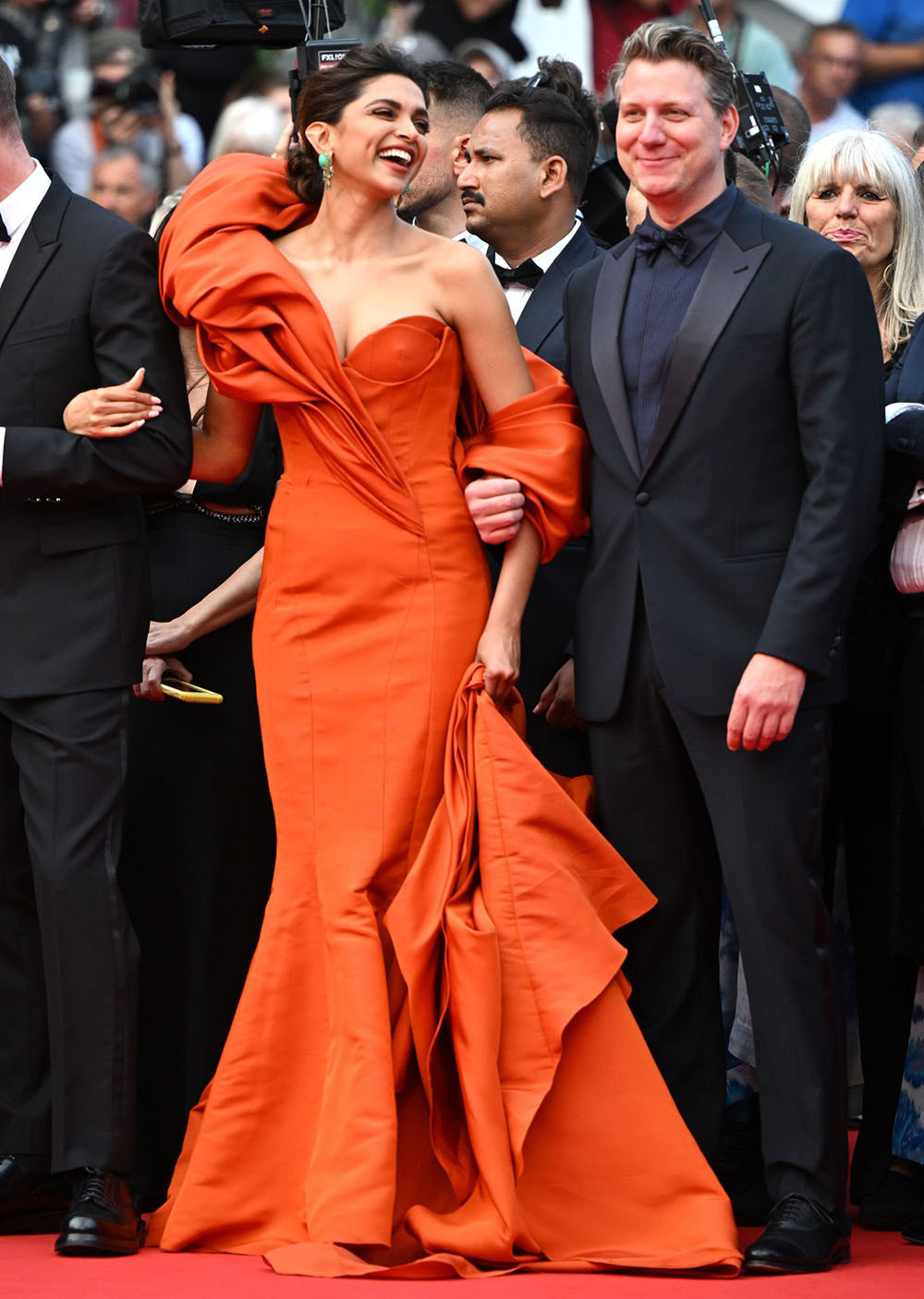 This custom made, saffron orange dress by Ashi Studio left us feeling unsure about whether we love or loathe this look. While the burnt orange complimented her tan skin and matched well with the emerald earrings, the cut itself was pretty questionable. The strapless taffeta gown stood out with its pronounced, draped detail around the shoulder, however it made us think: is this look trying too hard to make an impression? Minimal makeup helped to balance out the ensemble and a low bun added a much-needed simplicity to the look. 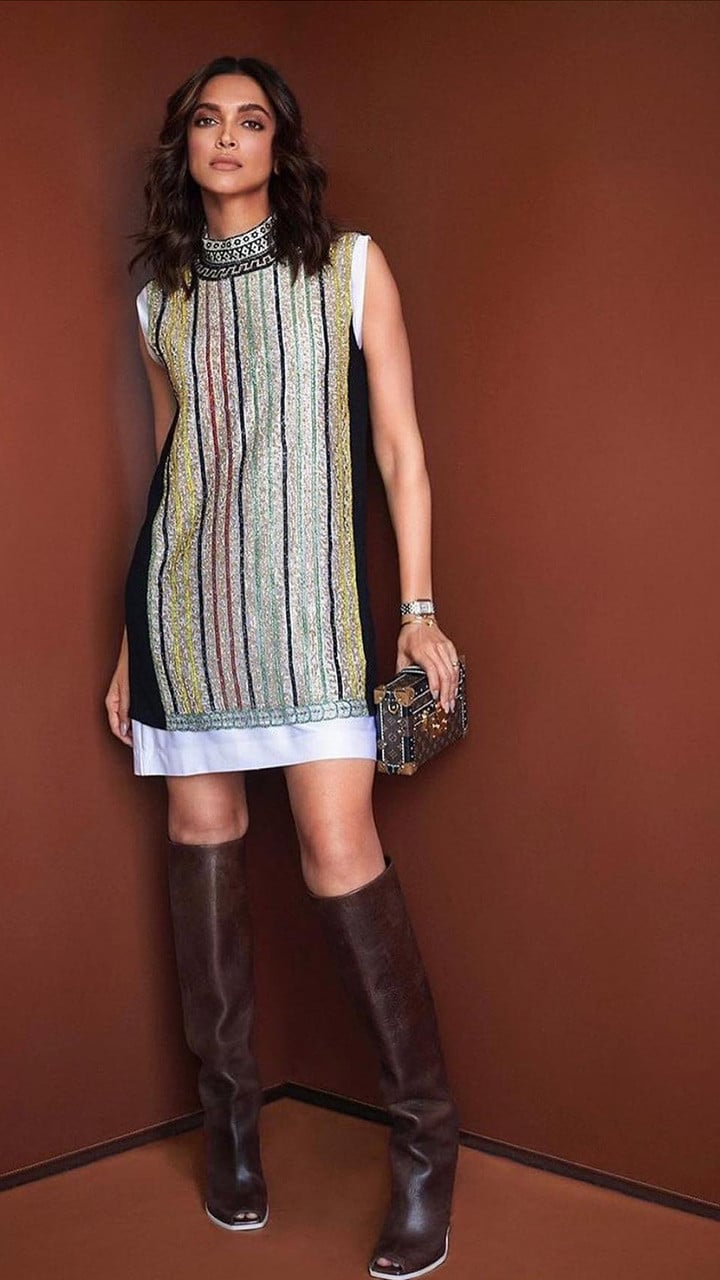 Perhaps one of her least impressive outfits was this head-to-toe LV ensemble. While the dress itself was average with its sequined design, its pairing with knee-high, brown leather boots was a major disappointment. The colour palette was poorly incorporated, with the colours unable to complement one another. What was meant to be an extravagant ensemble resulted in a big fashion faux pas! However, her makeup artist, Sandya, and hairstylist, Yianni Tsapatori, deserve all the praise for this look as her makeup and hair served to be a saving grace for the otherwise ordinary outfit. 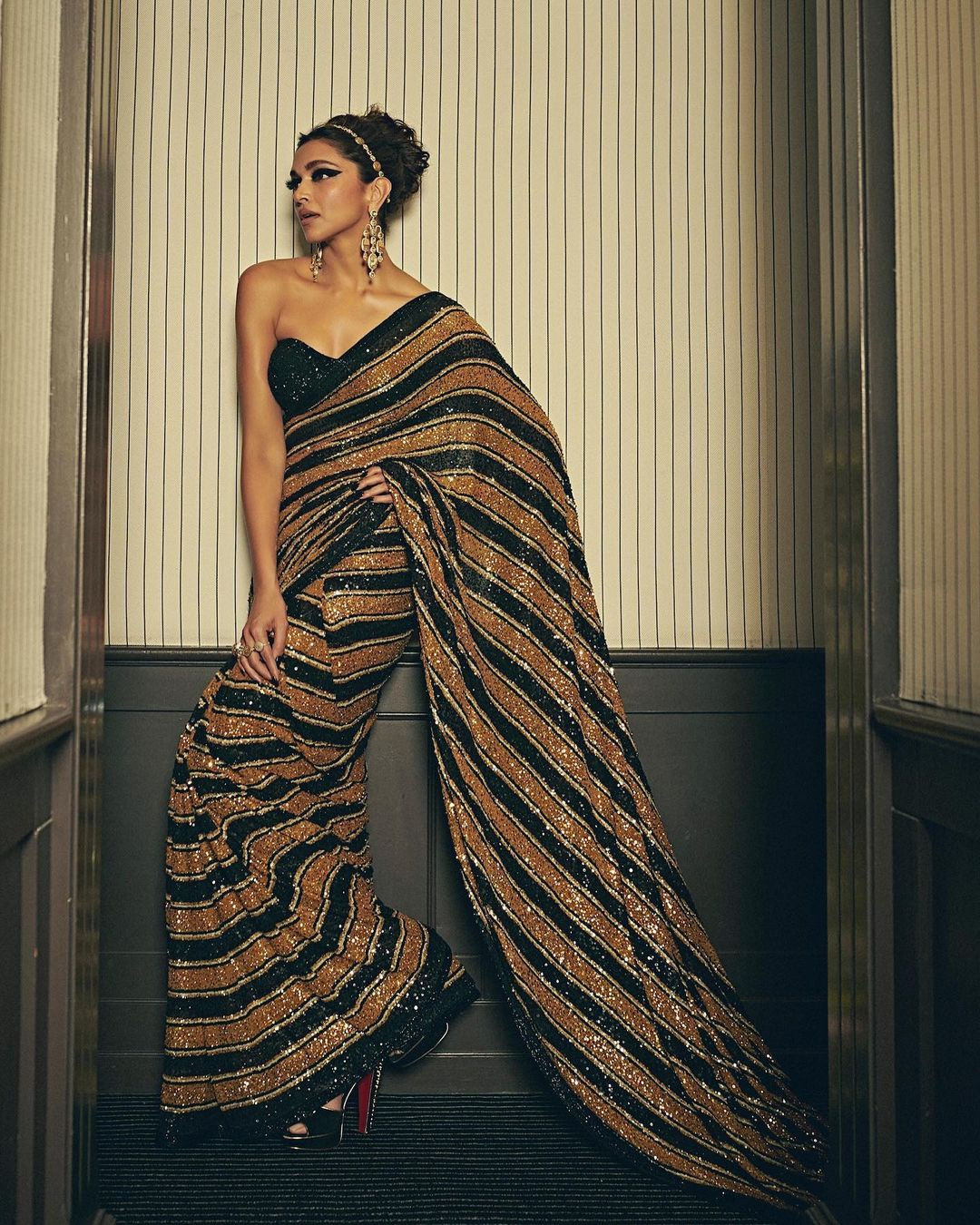 While Sabyasachi is known for his phenomenal designs, this saree became a victim to online trolls by netizens who were less than impressed by it. From the Aakash Tara collection, the saree, with its black and gold sequin stripes was perhaps Deepika’s least attractive ensemble featured at Cannes. The chunky earrings were a poorly thought out addition to the outfit, clashing with the gaudy saree. Another clash: the heavy, eyeliner-like eyeshadow look. While the different elements of the outfit were stunning on their own, together they formed a rather underwhelming look.