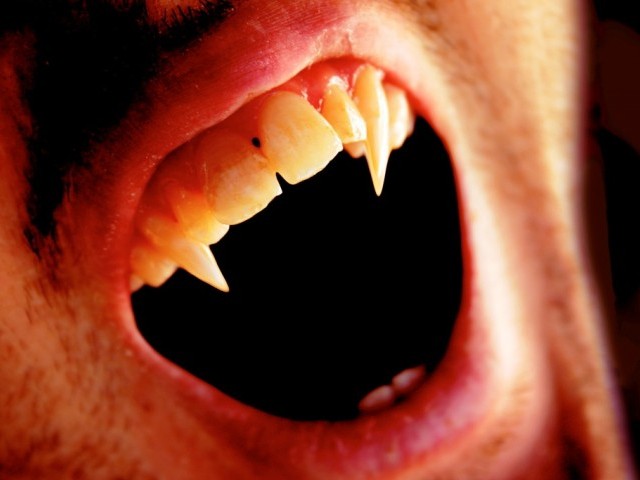 HOUSTON: The arrest of an American man who broke into a woman’s house and tried to suck her blood over the weekend has sparked discussion about the impact of vampire books and movies on youth culture.

Whether pop culture played a role in the attack remains to be seen, as 19-year-old Lyle Monroe Bensley awaits a psychiatric evaluation in jail on burglary charges in Galveston, Texas.

Found growling and hissing in a parking lot and wearing only boxer shorts, the pierced and tattooed Bensley claimed he was a 500-year-old vampire who needed to “feed,” Galveston Police Capt. Jeff Heyse said.

Vampires have been a focal point of literature since Bram Stoker’s 1897 novel, “Dracula”. But fascination, particularly among young people, has peaked in recent years with the popularity of the “Twilight” books about teenage vampires and the television series, “True Blood.”

“I think the vampire is a metaphor for the outsider and the predator in all of us,” said author Anne Rice, whose Vampire Chronicles series has captured the imaginations of horror fans since the 1970s.

“We’re all conscious at times of being alone, of being alienated, of being a secret self that fears exposure to the judgments of others. So we feel like vampires,” she told Reuters.

Bensley is now being held in the Galveston County Jail on a $40,000 bond for home burglary with intent to commit a felony.

The woman, who lived near Bensley and did not know him, escaped the attack unharmed, Heyse said.

Kevin Petroff, chief of the Galveston County District Attorney’s office, told Reuters no defense attorney has been appointed to date, and if Bensley had hired a lawyer privately, no notice had been filed.

The 99: Superheroes turn to Islam