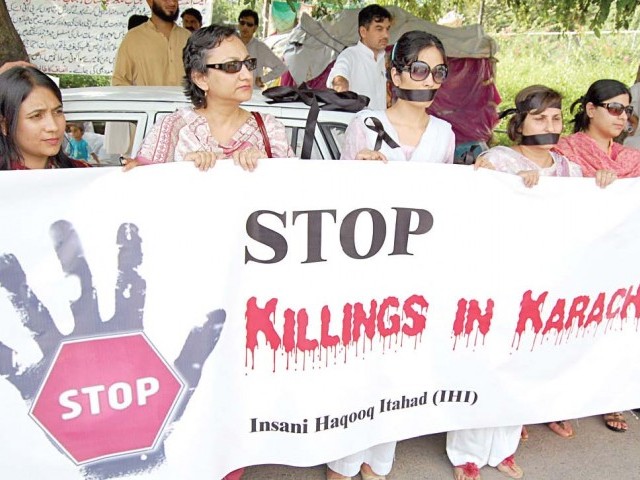 Activists of  left-wing political parties and civil society gathered outside National Press Club to express solidarity with the violence-hit people of Karachi and show their indignation against government’s ‘inaction’ to control the  killings spree in the southern port city of Pakistan that has left more than 50 people dead in the last 48 hours.

Although their numbers were small, their message was loud and clear — ‘Hum nikle hain Karachi ko bachane, ayo humare saath chalo’ (we are out to save Karachi, come and join us).

The protesters were wearing black arm bands and holding placards inscribed with slogans  condemning government indifference towards the precarious situation. The protest was held under the banner of Insani Huqooq Ittehad (IHI), an umbrella of a dozen civil society organisations working for human rights.

The protesters held the government responsible for the situation and demanded an immediate end to the target killings in Karachi.

They also expressed concern over the police’s helplessness to curb the violence. They claimed that the situation in Karachi called for the entire nation to stand up against the tyrannies and say ‘enough is enough, we can not bear it anymore; if we let this continue then we will be no more’.

They feared if the entire nation did not unite for peace the violence in Karachi will increase and spread to the rest of Pakistan.

“The government does not seem serious in chalking out strategies to stop the brutal and incessant target killings in Karachi which is traumatizing Karachiites,” said Farzana Bari, a teacher at Quaid-i-Azam University and a human right activist.

Bari said the deteriorating situation in Karachi gives a clear picture of lawlessness. “We will not let Karachi to be divided on ethnic lines,” she said.

“Every kind of mafias with political backing was involved in the bloodshed which rendered the police helpless,” she remarked. Police are hesitant to take action against terrorists as whenever there is any operation police personals are the first to be targeted,” she said.

Bari also stressed for measures to bring the situation under control as Karachi being the hub of economic activities could further deteriorate the already precarious economic situation.

Hasan Nasir from Awami Party Pakistan and a resident of Karachi said people are starving, children are crying for milk as majority of the shops are closed and people are confined to their homes. Nasir said if the situation persists it will impact the whole society stressing the need for a peaceful long march in which all Pakistanis should participate.

“My city is burning and my people are dying,” he commented sadly.

Jahangir Akhtar, a renowned human rights activist who is going on a hunger strike from September 12 for ending corruption and reduction in the military budget. Akhtar said the bill on corruption should be tabled in parliament as has been done in India.

“All politicians responsible for the bloodshed in Karachi should be held accountable and punished,” he exhorted. He said that unless people come out on the streets, the blood of innocent people will continue to be shed throughout the country.

Rakhshanda Parveen while quoting the example of the bomb blast on Friday in Jamrud agency of Khyber-Pakhtunkhwa, said the entire country is bleeding. Other members of IHI, including Seemi Kamal, Chairperson National Commission on the Status of Women (NCSW) Anis Haroon, Naeem Aurat Foundation’s Naeem Mirza, Aalia Mirza and prominent art curator and women rights activists Nageen Hayat also participated in the protest.