The IHC will hear the matter on emergency in view of extraordinary political situation in the country.

The petition was filed by Advocate Adnan Iqbal under Article 199 of the Constitution and mentioned the Federation of Pakistan, Government of Pakistan, Prime Minister Imran Khan, President Dr Arif Alvi, Ministry of Law and the secretary of the Ministry of Defence as respondents.

The petition he said was filed to "uphold the enforcement and mandatory constitutional provision with regard to identification of term" of the army chief.

As the political uncertainty continues to grip the country, Supreme Court has also decided to open its gates.

The staff of the top court has also been directed to arrive at midnight. According to the sources, the Supreme Court may initiate contempt of court proceedings against the National Assembly speaker for not implementing its order of holding voting on no-trust motion against PM Imran Khan within the stipulated time.

Meanwhile, the Supreme Court Bar Association (SBCA) has also approached the apex court regarding implementation of its order for ensuring the process of no confidence motion against Prime Minister Imran Khan. Petition is likely to be taken up shortly.

However, sources privy to the development said that PM Imran has refuted reports that he was planning to make any changes to the military leadership.

The meeting comes hours after parliament was abruptly adjourned before the voting on no-trust motion that the PM was widely expected to lose.

Human Rights Minister Shireen Mazari said in a statement that the government has de-classified the alleged threat letter termed by the premier as evidence of foreign conspiracy against his government.

The letter will be shown to the chief justice and the army chief, Express News quoted her as saying. 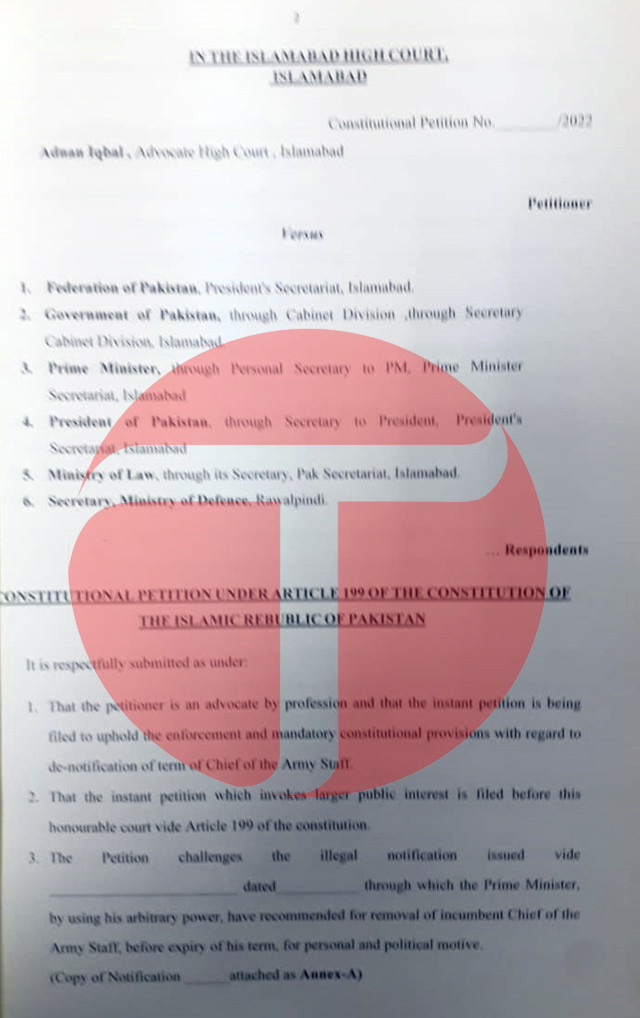 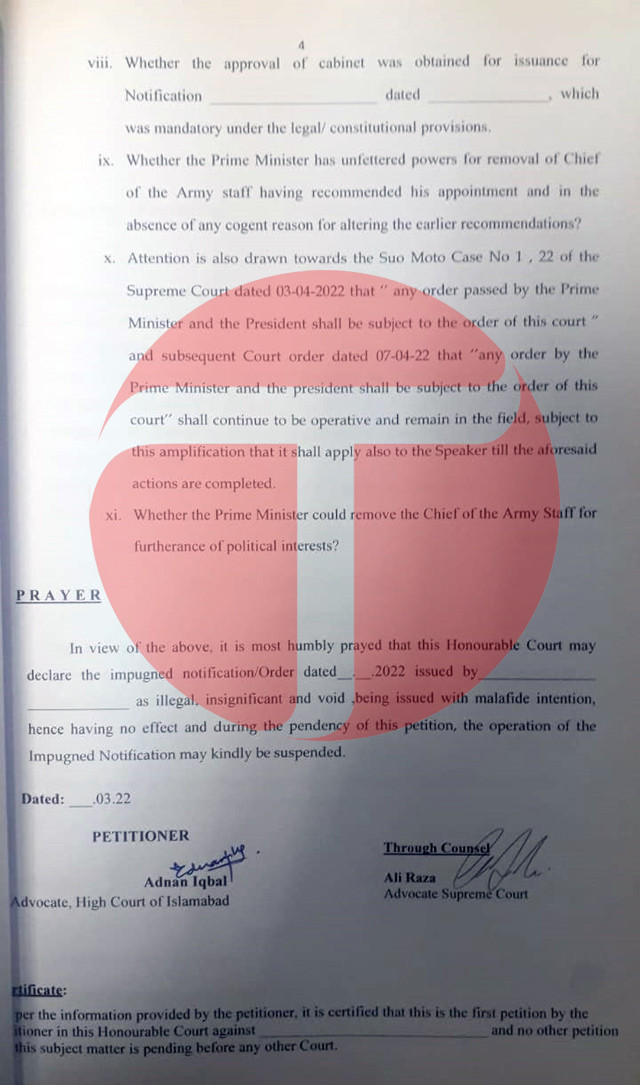 Imran Khan is no longer PM of country: opposition

The joint opposition, on the other hand, has said that Imran Khan is no longer the prime minister of the country and lost constitutional, legal and moral authority to remain in power.

Neither the opposition nor the people will accept any action taken by PM Imran before voting on-trust motion, they said in a joint statement issued on Saturday night.

They said since Imran Khan is no longer the chief executive of the country therefore he has lost the authority to exercise official powers.

The opposition said the PM’s decisions and orders will have no constitutional or legal status and warned Premier Imran of legal consequences if he violated the Constitution.

“The entire nation will resist every unconstitutional move of Imran Khan,” they maintained.

The government however strongly rejected the reports with Information Minister Fawad Chaudhry saying that no steps were planned to remove the army chief and termed the reports "baseless".

"The government fully understands the importance of the army chief and Pakistan Army as an institution. Reports that anyone is even thinking of changing the leadership of Pakistan Army are baseless rumours and lies. This is being done under an agenda. The government condemns these rumours and completely denies them," Fawad wrote on his official Twitter handle.

This is a developing story and will be updated accordingly…

SC verdict on no-trust should be implemented in ‘letter and spirit’: AGP

Security of parliament beefed up amid no-trust session