A team comprising Korean and Pakistani scientists has developed a promising solar cell technology that sets two new world records of efficiency in the lab. The approach could help foster clean energy initiatives to combat the global warming issue.

A team led by Dr SeJin Ahn, principal researcher at the Korea Institute of Energy Research (KIER) and consisting of Pakistani scientists, has made this remarkable solar cell technology.

The bandgap is the amount of energy needed to free the electron from any semiconductor; the lower the bandgap the more it produces electricity. 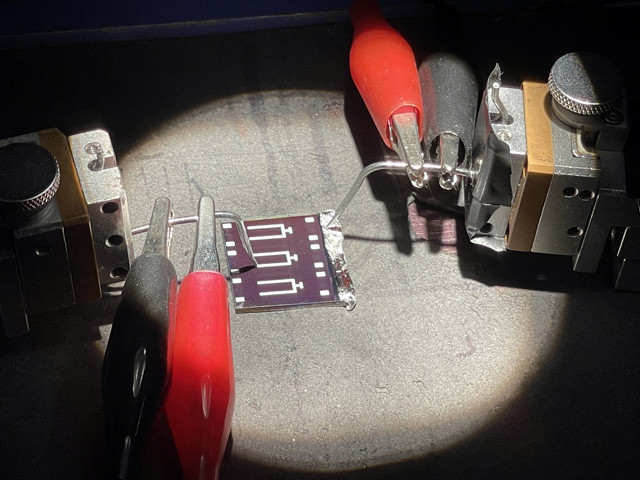 A close view of the solution based CISSe developed by Yasir Siddique. . PHOTO: EXPRESS

Our sun is an average 150 million kilometres away but a primary source of light and heat for our planet. Theoretically, the sun throws 1,360 watts per square metre of mixed energy on a surface directly facing it.

However, the sunlight on any solar cell largely reflected or passed through the structure and a few per cent of energy converts directly from sunlight into electricity. So, the power conversion rate, roughly called the efficiency is the degree to which a solar cell converts energy from sunrays.

However, Siddique’s cell falls in the emerging trend of Tandem solar technology and is now most efficient in its category.

Siddique’s record efficiency solar cell has been certified Photovoltaic test laboratory at KIER, is an ISO/IEC17025 certified test centre and accredited by Korea Laboratory Accreditation Scheme (KOLAS) which signed the ILAC-MRA (International Laboratory Accreditation Cooperation-Mutual Recognition Arrangement). The patent is to be filed soon and the studies published in the top research journal of the world “Energy and Environmental Science” have an impact factor of 38.532.

“It is the single largest high impact research published from KIER, Daejeon Campus in the recent times,” Yasir Siddique said.

The recipe of solar cell

In the previous record, a team of Chinese, Americans and Australians declared 13.5 per cent efficiency of the same type of solar cells. But that cell fabrication was only possible in glass-based glove box filled with Nitrogen gas. A huge amount of Nitrogen was needed in mass production which made commercialisation nearly impossible.

Siddique also devised a magic ingredient to make the device more stable and it was a molecular ink.

“We successfully eradicated the need for Nitrogen and carved the cell in an open [ambient] air environment. The CISSe based thin film was made possible due to the addition of N, N-dimethylformamide (DMF) based molecular ink which has the ability to make highly stable complexes with Thiourea and metal chlorides,” Siddique added.

Later on, the KIER team used air annealing temperature – common heating and cooling method used in electronics – not only to remove carbon contents in the cell’s absorber film but also proposed a way to control and acquire an optimum degree of crystallisation of the precursor layer. Perfect crystallisation is much needed for desired results.

Also read: Pakistan in one of the best solar zones

Air annealing is used to further enhance the physical, optical or structural properties in electronics fabrication. For example, heat treatment of steel is a common procedure in which the metal is made more ductile.

Air annealing of four exact samples was performed on 210, 230, 280 and 330 degree centigrade. Out of these temperatures, 230°C has been found to be experimentally optimum air annealing temperature and at this temperature, they were able to fabricate a CISSe solar cell device having a certified world record efficiency of 14.4%.

This study revealed that air annealing temperature in solution-processed chalcogenide device formation is a significantly important parameter to control the electrical properties, unlike previously published research where all the emphasis has been given to selenisation temperature and pressure.

In the next move, a thin perovskite solar cell was placed upon CISSe cell for further study. The Eureka moment observed when this double-layered; all-solution processed perovskite/CISSe tandem solar cell shows the efficiency of 23.03% which is also a world record in this category of solar cells.

Discovered in the 1800s by Russian scientists, Perovskite is an emerging promising mineral to carve efficient solar cells and Siddique further enhanced this by adding the CISSe device.

Long last stability is another important factor of solar panels. For instance, the traditional silicon-based cell can withstand all weathering conditions for 20 to 30 years. The KIER’s cell has promising stability as well.

“We have analysed our new record holder solar cell for the past one year and it is working on the same efficiency perfectly,” Siddique also said.