Govt decides to go ahead with the planned session on Monday

The Pakistan Tehreek-e-Insaf (PTI) government decided on Saturday to go ahead with the in-camera briefing on the national security despite joint opposition parties’ boycott of the meeting.

A day after the opposition parties announced that they would boycott the meeting of the Parliamentary Committee on National Security the ruling party asked them to review their decision and attend the briefing by National Security Adviser Moeed Yusuf.

Despite their refusal, the government while once again extending the invitation to the key opposition leaders, including the Leader of the Opposition in the National Assembly Shehbaz Sharif and PPP Chairman Bilawal Bhutto Zardari, has decided to convene the 4th in-camera meeting on national security on Monday at noon.

“4th in-camera meeting of the Parliamentary Committee on National Security will be held as per its schedule on Monday, the 6th December, at 12:00 Noon in the Committee Room No2, Parliament House,” read the revised notice of the National Assembly Secretariat.

The revised notice has been issued in continuation of the November 30 notification through which National Assembly Speaker Asad Qaiser had summoned the national security meeting to discuss the security situation in the country and the region. The NSA is scheduled to give a presentation on the National Security Policy in the briefing.

Accusing the government of riding roughshod over the Constitution and making parliament a “rubber stamp”, the joint opposition had announced boycott of the in-camera briefing slated to be held on December 6.

The opposition was also irked by the ruling party’s act of bulldozing bills during the joint session of parliament and the conspicuous absence of Prime Minister Imran Khan from the previous sessions of the Parliamentary Committee on National Security.

In response to the opposition's announcement boycotting the upcoming in-camera briefing, information minister Chaudhry Fawad Hussain said that the decision was “unfortunate”.

Urging the opposition to rethink and attend the briefing, the information minister said that it was the first time in seven decades that a government was presenting its policy on national security in parliament, adding it was a matter of national security and not a political event.

In response to Chaudhry’s tweet, PML-N Secretary Information Marriyum Aurangzeb said that the Joint Opposition was more committed to the issues of National Security than the government which was why it participated in all such briefings in the past while “Prime Minister Imran Khan didn’t even bother to attend a single one of them.”

Marriyum said it was a pity that “Imran Khan’s arrogance, ego and stubbornness prohibited him from participating in any national consultation process.”

Earlier in a statement, the joint opposition in parliament, while calling the prime minister “selected” had said that Imran Khan did not even attend the meetings on important national issues, including the one called to discuss the situation in the Indian Illegally-Occupied Jammu and Kashmir (IIOJK).

Moreover, they accused the prime minister of being “ignorant” of the spirit of democratic consultations and the importance of difference of opinion, adding that he did not have the capability of using the collective wisdom of the nation for the betterment of the country and the people.

They said that the in-camera briefing would merely provide the government with another chance to put up a show that would have nothing to do with the critical issues facing the country and the people today, or providing solutions to those problems.

While calling NSA Moeed Yusuf merely a “showpiece”, the opposition parties had said that neither the NSA had the relevant information nor the authority to take any decisions, adding that his briefing would not have anything to do with the real factors and future blueprints. 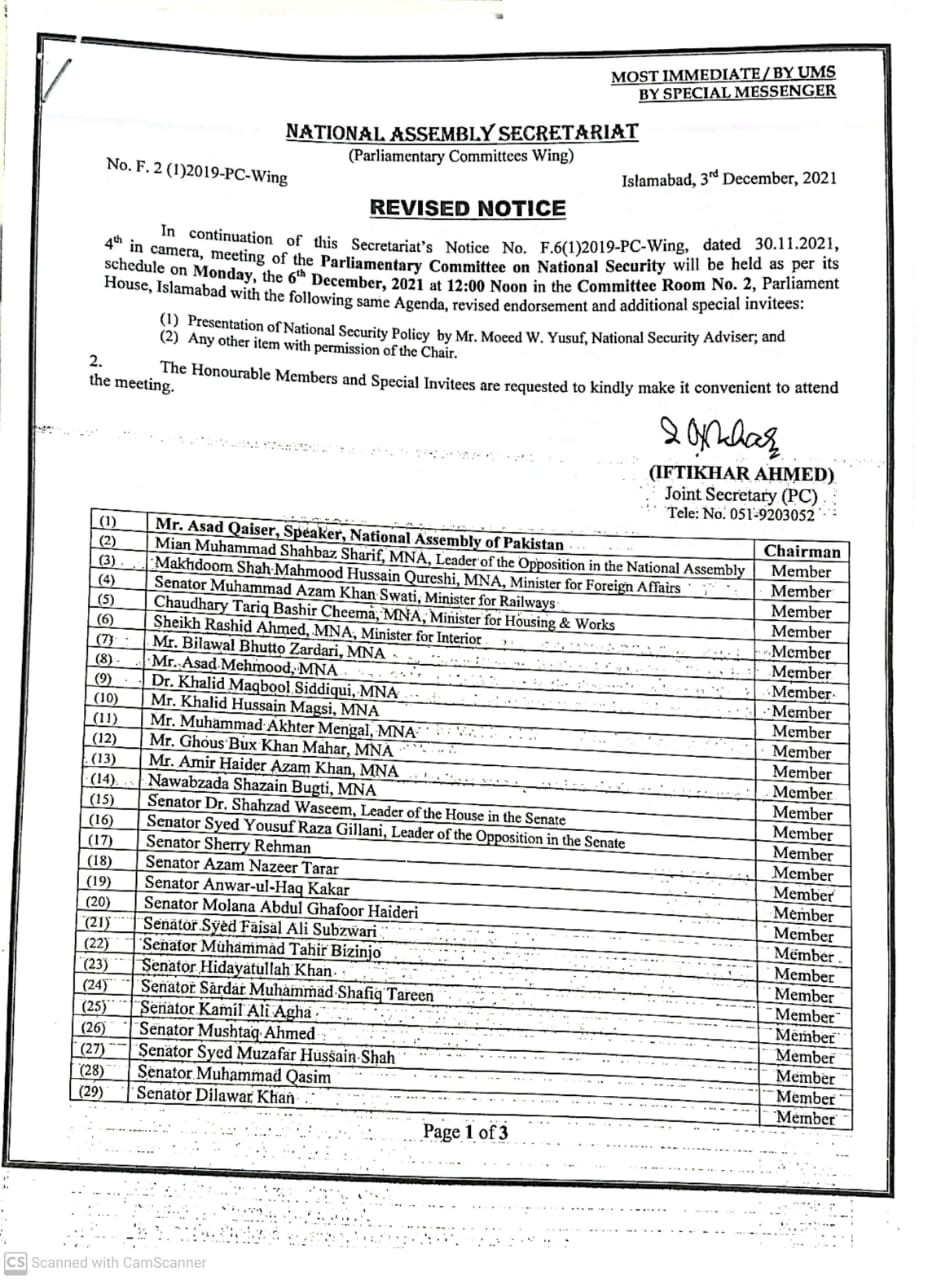 Iran urges people to dress warmly to cut gas use

Imran will go down in history as conspirator, plotter: Maryam