Indian envoy summoned over ‘killing of Pakistani prisoner in IIOJK’

The participants of the Kashmir Digital Campaign pictured at the launch of the digital van, in London on October 28, 2021. PHOTO: EXPRESS
LONDON:

The Tehreek-e-Kashmir (TeK) United Kingdom launched a digital campaign in London on Wednesday to condemn the unjust occupation of Indian Illegally Occupied Jammu and Kashmir (IIOJK) and awaken the world's conscience on the issue.

The Tehreek-e-Kashmir in the United Kingdom launched a digital campaign in London condemning the unjust occupation of Kashmir and highlighting the world's conscience on the issue.

Speaking on the occasion, Kayani said that the main purpose of initiating the digital van was to draw the world's attention to the October 27, 1947 invasion of Kashmir by the Indian occupation troops.

Through the van, he added, the world is to be made aware of how the Indian government is using its forces to crush the legitimate and peaceful political struggle of the people of the disputed Himalayan valley.

“Kashmiri people across the globe observe October 27 every year as a black day to remind the world to implement the UN resolutions on Jammu and Kashmir so the people can decide about their political future, “ Kayani remarked.

Dr Mir said he and his team had specially arrived from the US to record their protest against the illegal occupation of Jammu and Kashmir.

He added that for this purpose, he along with colleagues, will also meet with different people and think tanks in the UK to put pressure on India to leave IIOJK. 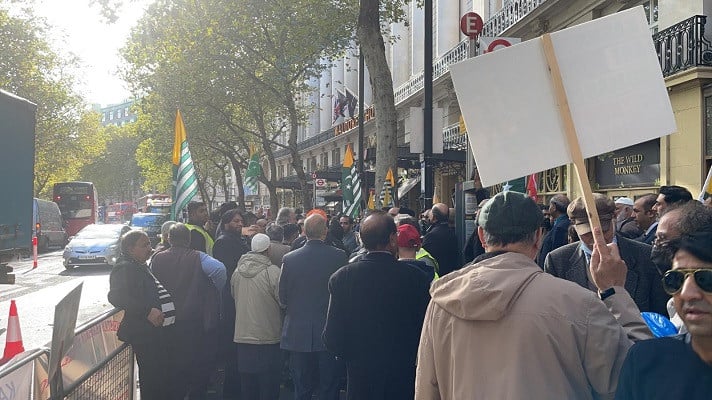 Protesters pictured while staging a demonstration against Indian atrocities in IIOJK, in London on October 27, 2021. PHOTO: EXPRESS

They termed the continuous illegal detention of All Parties Hurriyat Conference (APHC) leaders in and outside IIOJK the worst kind of human rights violation on the planet and urged global human rights bodies to take the notice of Indian state terrorism.

A day earlier, Pakistanis and Kashmiris around the world observed Black Day to condemn India’s aggression and violence in IIOJK.

Black flags were hoisted at public and private buildings to mark the Black Day against India’s aggression and atrocities in the held valley and to shake the conscience of the international community, specially the United Nations urging it to play its due role in providing Kashmiris their legitimate right to self-determination.

Pakistanis and Kashmiris observed the day in a befitting manner, reminding the UN resolutions passed by its Security Council in favour of the right to self-determination of the people of IIOJK.