Pakistani currency fell past Rs175 against the US dollar for the first time in history and stood at an all-time low of Rs175.27 in the inter-bank market on Tuesday.

Absence of news regarding resumption of International Monetary Fund’s (IMF) $6 billion loan programme is apparently the primary reason behind the continued depreciation of the rupee.

A few weeks ago, financial market experts had forecast in their revised estimates that the rupee would cross Rs175 against the greenback by the end of June 2022.

Besides, the uptrend in global commodity prices is another major reason behind the depreciation of the rupee. Crude oil benchmark Brent has touched multi-year high of $86 per barrel compared to around $40 per barrel in December 2020. Pakistan heavily relies on imported energy.

With the latest drop of around half a percentage point (or Rs0.84) on Tuesday, the rupee has cumulatively lost over 15% of its value (or Rs23) in the past five months compared to the 22-month high of Rs152.27 in May 2021, according to data of the State Bank of Pakistan (SBP).

“The local currency will recover Rs1-2 against the greenback and stabilise after the IMF loan programme is resumed,” Pak-Kuwait Investment Company Head of Research Samiullah Tariq said while talking to The Express Tribune.

“Pakistan is expected to successfully conclude talks with the IMF and make an optimistic announcement over the next two to three days.”

The drop in the rupee encouraged the gold pricing committee to jack up the precious metal price to an all-time high of Rs132,000 per tola (11.66 grams).

It hiked the price partly due to rupee depreciation and partly due to soaring demand from investors. Otherwise, its price in the global market fell $19 per ounce (31.10 grams) to around $1,785 by Tuesday evening compared to Monday’s close of $1,802.

The notable fall in the bullion price in the global market should help stabilise its domestic price, provided that the country meets demand for the commodity through imports.

“Market talk suggests that the rupee will fall to Rs180 against the US dollar under the current cycle of depreciation due to the IMF influence,” said All Sindh Saraf and Jewellers Association (ASSJA) President Haji Haroon Chand.

The non-stop depreciation in rupee has notably improved the real effective exchange rate (REER) - the country’s cost of trade with the world – suggesting that imports have turned expensive and exports have become viable.

“The REER index fell to 95.9 in September 2021, depreciating by 0.7% compared to last month,” State Bank of Pakistan (SBP) reported on its official twitter handle on Tuesday. “Cumulatively, REER has depreciated by 4% since the beginning of FY22 and by 7% from its recent peak of 103 in April 2021.” 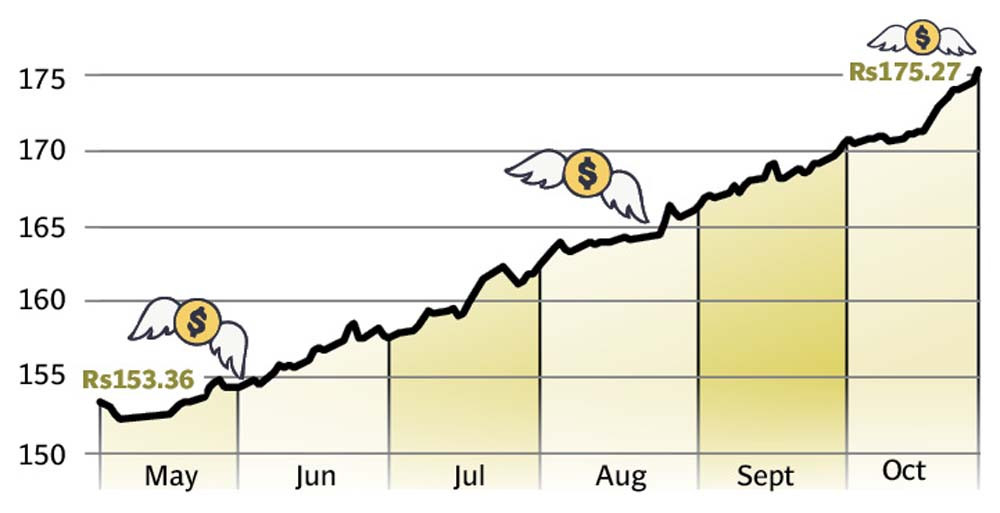 Tariq said that rupee is depreciating against the US dollar and other major currencies of the world due to elevated current account deficit. The high import bill (which we pay in dollars) remains the single largest dominating factor behind the current account deficit of over $1 billion a month in the first three months (July-September) of the ongoing fiscal year.

On the other hand, the sluggish increase in export earnings failed to improve the current account balance.

The sum of inflows (export earnings and the remittances at around $5 billion a month) remained $1 billion lower than the import bill of $6 billion per month.

“The gap between demand for dollars (for import) and its supply (exports and remittances) is taking toll on the rupee,” Tariq said. “The local currency will stabilise when the demand equals supply.”

“The State Bank of Pakistan has adopted the practice of not intervening (supplying dollars) in the inter-bank market.

If the central bank intervenes, it would erode the country’s foreign exchange reserves.”

AA Gold Commodities Director Adnan Agar said the other day the gold would continue to trade in the range of $1,700-1,800 per ounce (31.10 grams) – near and around one-month high – in global market.