It was for the first time that the prime minister interviewed potential candidates before finalising the name of new spy chief sent by the Ministry of Defence. FILE PHOTOS
ISLAMABAD:

Although the prime minister picked the same general, who was named as the new spymaster in October 6 press release of the military's media wing, he has set a precedent for the appointment of the DG ISI in the future.

The meeting was part of the ongoing consultation process between the Prime Minister and Chief of Army Staff about the timing of change of command in ISI and selection of the new DG ISI.

It was for the first time that a premier had interviewed potential candidates sent to him by the ministry of defence before the appointment of the new ISI chief.

Since 2000, it was only in 2012 when the announcement of the new DG ISI came from the PM’s office and even that too was a terse statement making no mention of either interviews or consultations with the army chief.

On all other occasions, the announcement of the new spymaster was made by the Inter-Services Public Relations (ISPR).

In fact, the last two appointments during the current government also came from the military's media wing.

However, this time the prime minister objected to the past practice and insisted that he would make the final call – triggering an unprecedented standoff between the civil and military leadership, which previously claimed to be on the same page.

The deadlock seemed to have broken after both sides reached a compromise.

While the prime minister agreed to stick with the army chief's nominee for the coveted slot, the latter conceded that the authority to appoint the DG ISI rested with the premier.

PM Imran also managed to prevail upon the army chief as far as interviewing the candidates for the ISI chief slot was concerned.

It had never happened before that serving generals were interviewed by the sitting prime minister for the DG ISI position.

Not just that, the prime minister also made it clear that he was the final authority to decide when the incumbent DG ISI would relinquish the office and the new one would take over.

As per the October 6 official handout of the ISPR, the new DG ISI was supposed to take charge immediately. But the notification now issued by the PM’s office stated that the incumbent one would continue as DG ISI till November 20.

A notification issued by the PM’s Office on Tuesday read: “The Prime Minister has seen and approved the appointment of Lt Gen Nadeem Ahmed Anjum, HI (M) as Director General Inter-Services Intelligence, with effect from November 20, 2021.”

The notification added that the incumbent spymaster, Lt Gen Faiz Hameed “shall continue to hold charge as the Director General Inter-Services Intelligence till November 19, 2021”.

"The meeting was part of the ongoing consultation process between the prime minister and chief of army staff about the timing of change of command in [the] ISI and selection of the new DG," read the PM’s office handout.

During this process a list of officers was received from the defence ministry.

The prime minister interviewed all the nominees.

A final round of consultation was held between the premier and COAS on Tuesday.

"After a detailed consultative process, the name of Lt Gen Nadeem Anjum was approved as the new DG ISI," the statement read, adding that he would assume charge of the office on November 20.

The incoming DG ISI, as per the ISPR, was commissioned in the Light Anti-Tank Battalion of Punjab Regiment.

He has diversified experience of command, staff and instructional assignments.

He holds a Master degree from King’s College London and NDU Islamabad.

"[The] general has vast experience of command in conventional as well as sub conventional threat environment," read the ISPR statement.

It further said he has been on command on both the western border and the Line of Control (LoC) besides a long service in Balochistan.

He commanded an infantry brigade in South Waziristan Agency as well as one during Kurram Agency and Hangu during Operation Zarb-e-Azb.

He was the IG FC Balochistan during Operation Radd-ul-Fasaad.

He has been an instructor at the PMA, Staff College and NDU as well as a commandant of Staff College, Quetta. He has also remained the chief of staff of 5 Corps.

"[The] general is a keen runner and enjoys playing basketball and cricket," the statement added.

The ISI is the premier intelligence agency of Pakistan tasked to deal with internal and external threats.

Theoretically, it reports to the prime minister.

The incoming ISI chief will have his hands full in dealing with multiple challenges – particularly the Afghanistan situation and tensions with India. 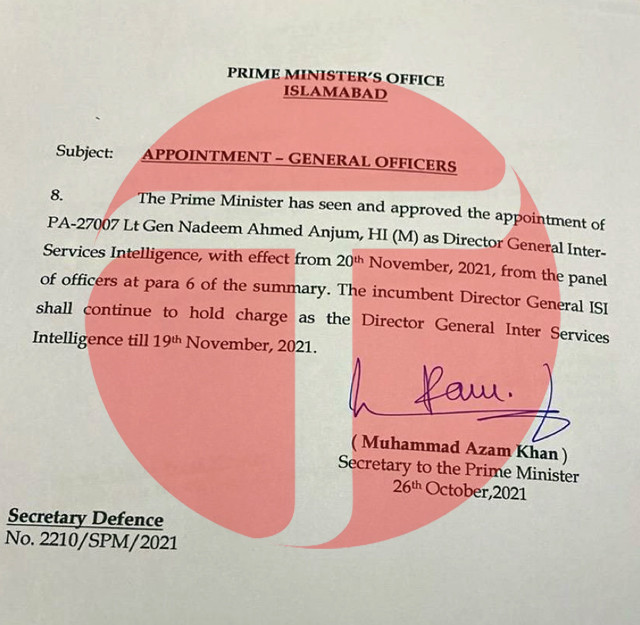