The death of society

Indian Prime Minister Narendra Modi in his speech at the United Nations General Assembly (UNGA) expressed concern over the threat of terrorism and terrorist activities in Afghanistan but conveniently forgot what was happening right under his nose in Indian Illegally Occupied Jammu and Kashmir (IIOJK).

What India was doing in the held region was highlighted by Pakistan when it released a 131-page dossier against India early this month, accusing India of grave human rights violations in IIOJK and stating that India was hosting and running terror camps of ISIS which was fomenting trouble in Afghanistan.

According to the evidence presented in the dossier, India was operating training camps in Gulmarg, Raipur, Jodhpur, Chakrata, Anupgarh and Bikaner.

Read more: 'Abettor of terrorism': Pakistan hits back at India at UNGA

According to National Security Adviser of Pakistan Dr Moeed Yusuf, the world was not addressing the issue of India’s involvement in fomenting terrorism from Afghanistan. 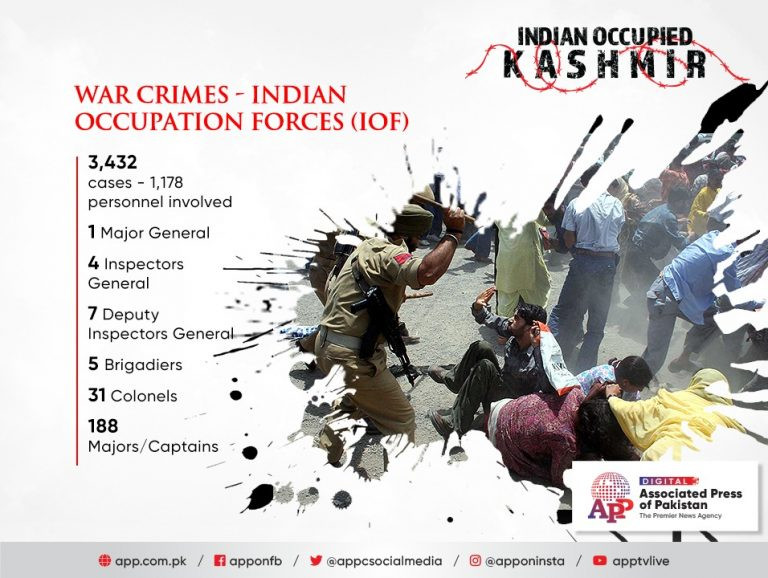 India was perpetuating state terrorism in Occupied Kashmir and dossier issued by the government of Pakistan contained details on a vast range of incidents and atrocities including extrajudicial killings, arbitrary arrests, cases of torture, pellet gun injuries and rapes and over 100,000 children being orphaned.

India carried out false flag operations and planted weapons on innocent residents to implicate them.

Modi did not bother to respond to Pakistan’s dossier that highlighted another atrocity which was the suspected use of chemical weapons by India against the Kashmiris. It pointed that bodies of 37 Kashmiris burnt alive by IOFs were completely beyond recognition.

The dossier showed images of charred bodies and pointed that the use of chemical weapons was in complete contravention to the ‘Chemical Weapons Convention’ and said that it necessitates “an impartial international investigation.”

Read: Incentivising Taliban will be win-win for all: PM

The document also provided details of the 8,652 unmarked mass graves that have been identified in 89 villages of six districts in IIOJK.

When Modi stated in his speech that Afghanistan’s territory should not be used to spread terrorism it looked like a crass joke. Prime Minister Imran Khan, in a recent interview, held India responsible for terrorism in Pakistan pointing out that Da'ish/ISIS was using the Afghan territories to operate against Pakistan with India’s backing.

In his speech, Modi talked about regressive thinking and extremism.

Modi’s plea to help minorities of Afghanistan was a crude contradiction as the Indian government was supporting proponents of Hindutva ideology, who were routinely harassing and torturing members of the minority communities and were inciting “regressive thinking and extremism”.

Recently, the Human Rights Watch (HRW) urged the international community to “spotlight the human rights abuses” of his government.

In India, people were criticising Modi’s government for politically motivated prosecutions, human rights abuse particularly against minorities and not allowing the watchdogs to monitor the grim situation.

On September 22, the US congressional briefing on ‘Religious freedom in India’ by the Human Rights Watch revealed an appalling record of the human rights violations by the Hindu nationalist Bharatiya Janata Party (BJP).

The US congressmen were briefed that the attacks against religious minorities in India, especially Muslims, had increased especially since the BJP came to power in 2014.

The testimony also documented the Indian laws and policies to discriminate against religious minorities, the bias against Muslims in the Indian justice system, ongoing clampdown in IIOJK, BJP’s government’s empowering of vigilantes and crackdown on civil society for raising these issues.

It was highlighted that the BJP leaders and affiliated groups had long stigmatised minority communities as a “threat to national security and to the Hindu way of life”, and making hate-filled remarks against Muslims around state and national elections.

The Modi government had adopted laws and policies that systematically discriminate against Muslims and other minorities.

This divisive political discourse has served to normalise violence against minorities, especially Muslims, in India. The prejudices embedded in the government have infiltrated independent institutions, such as the police, empowering nationalist groups to threaten, harass, and attack religious minorities with impunity.

While Modi craves global recognition at the world stage, the legacy of the BJP government, mired in abuses, will continue to haunt at home.