The United States has no hostile intent towards North Korea and hopes it responds positively to offers for talks on its nuclear weapons and ballistic missile programmes, a US envoy said on Tuesday as he met Asian allies.

The meeting between top officials of the United States, Japan and South Korea on ways to end a standoff with North Korea over is nuclear ambitions came a day after it said it had tested a new long-range cruise missile.

"The United States has no hostile intent towards the DPRK," the US envoy for North Korea, Sung Kim, said in opening remarks at the talks in Tokyo, referring to North Korea by the initials of its official name - the Democratic People's Republic of Korea.

"We hope that the DPRK will respond positively to our multiple offers to meet without preconditions."

Former US President Donald Trump held three meetings with North Korea leader Kim Jong Un but without progress on the US demand that North Korea gives up its nuclear and missile programmes in exchange for sanctions relief.

President Joe Biden's administration has said it would explore diplomacy to achieve the goal of the complete denuclearisation of North Korea but would not seek a grand bargain with Kim.

North Korea has said it sees no sign of policy changes from the United States, citing issues such as sanctions as well as joint US-South Korean military exercises, which it says are preparations for war against it.

In what is widely seen in the region as a show of defiance, North Korea's state media announced on Monday successful tests of a new long-range cruise missile that analysts said could be its first such weapon with nuclear capabilities.

Read US, Japan, S.Korea to meet over N.Korea nuclear standoff

US envoy Kim did not refer explicitly to the missile test in his public remarks. He later said he and his Japanese counterpart, Takehiro Funakoshi, and South Korea's Noh Kyu-duk, had a "terrific discussion".

"All three countries agreed that we should continue to pursue a diplomatic path ... but the main goal being complete denuclearisation of the Korean peninsula,” Kim told Reuters.

South Korea's foreign ministry said in a statement the three envoys had agreed that "dialogue and diplomacy was urgent to accomplish the complete denuclearisation of the Korean peninsula". 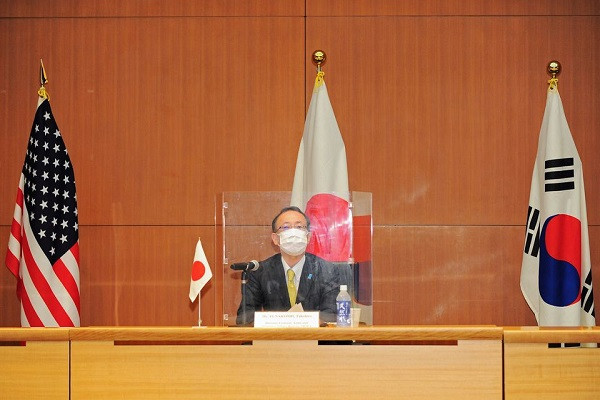 South Korea and the United States also discussed ways to engage North Korea, including the possibility of a joint humanitarian project, the South Korean ministry said. It did not provide details.

While Japan and South Korea are both close military and economic allies of the United States, ties between the Asian neighbours have often been strained over issues including sovereignty disputes and the legacy of Japan's 1910-45 occupation of the Korean peninsula.

Senior Chinese diplomat Wang Yi is scheduled to visit South Korea this week for talks with its foreign minister.