Hundreds of Hazara worshippers overflowed from a mosque on the outskirts of the Afghan capital on Friday, touching their foreheads to the ground as they took part in the most important prayer of the week.

Long persecuted by both the Taliban and Da'ish for their Shia faith, members of the ethnic minority group say they feel less threatened since the Taliban seized power on August 15.

"For now the threat is reduced."

But after holding top positions in previous US-backed governments, they fear the future consequences of being shut out of the Taliban's new acting administration -- made up of hardline militants of the group's old guard. 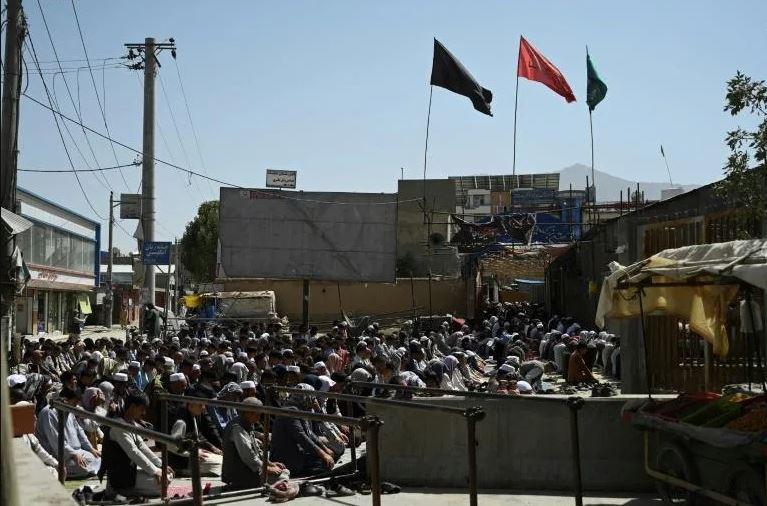 "It is largely made up of a single ethnicity," Hassanzadah said, referring to the Pashtuns who dominate the Taliban and are Afghanistan's biggest group.

"We don't see any participation of the Hazaras, which is a huge concern," he told AFP.

The Hazara make up the bulk of the country's Shia minority, and it is feared the Taliban -- hardliners from the Sunni branch of Islam -- may again turn on them, just as they did during their last regime in the late 1990s.

They have suffered some of Afghanistan's most violent assaults, with rallies bombed, hospitals targeted and commuters ambushed.

In June, Da'ish suicide bombers targeted a school just 1.6 kilometres (one mile) away from the mosque, killing hundreds.

In the Hazara neighbourhood, there were visibly fewer Taliban fighters on the streets and manning checkpoints, AFP journalists saw.

But like many others in the capital, taking home a salary was their most pressing concern, as food prices soar.

"The people who used to work for the government have all become unemployed. There's a lot of anxiety and worry," worshipper Suleiman told AFP outside the mosque.

"It's not like the Taliban are killing us, but it is better to die than to live suffocated like this."

Many government services are no longer functioning, while the international community, which has long propped up the aid-dependent economy, hesitates over funding Afghanistan.

"We haven't seen anything bad from the Taliban but there is no work for people, what are we supposed to do about our hunger?" Suleiman said.

Comprising between 10 to 20 per cent of the country's 38 million people, Hazaras have been marginalised for their faith in a country riven by deep divisions.

After leading the prayers, Imam Abdul Qadir Alemi told AFP inside the mosque he still hoped the Taliban's acting government would later become representative of the people in the country.

"There is no doubt that the people of Afghanistan want an inclusive government in which all ethnicities, followers of all faiths and different segments of society are represented."

World needs to engage with new reality in Afghanistan: Qureshi

No 'evidence' of forced conversion to Islam in Pakistan, claims study