Pakistan's role in Kabul evacuations acknowledged as US completes withdrawal

'SC judges to be appointed on basis of seniority'

Former skipper called out Aalia Rasheed for sharing her views on a post that sees him baking.

Former skipper of Pakistan's cricket team, Sarfaraz Ahmed, has called out a sports journalist after she commented on his wife’s latest post. Taking to Twitter, Khushbakht Sarfaraz shared a video of her loving husband baking a pasta for her, in which he can be seen giving complimentary instructions to his fans as well.

To this, fellow right-arm medium-fast bowler Hassan Ali commented joking about how the ‘Captan’ never taught him and his team-mates this technique. The right-arm leg break spinner, Shadab Khan, chimed in trolling, “Next time Captain will make tea for us.” Following this, journalist Aalia Rasheed jumped the brigade taking harmless jibes at Sarfaraz and told him to refrain from showing off his cooking abilities. Especially since the last time his fans saw him serve water to the players on the field, they lashed out at PCB.

Perks of him being around :) pic.twitter.com/txk0QknOJ8 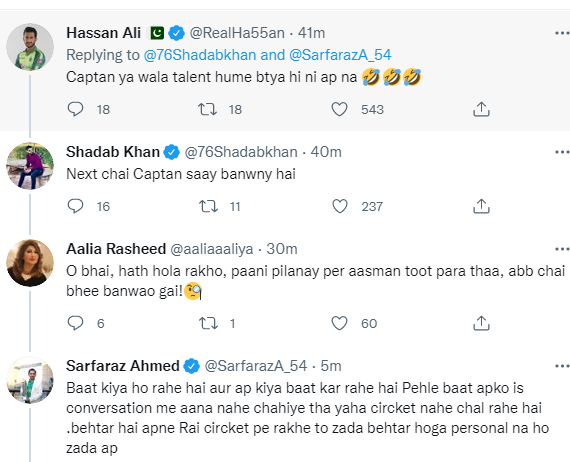 He tweeted, “Baat kiya ho rahe hai aur ap kiya baat kar rahi hain (look at what is being discussed and then look at what you are saying). Pehli baat, apko is conversation men aana nahi chahiye tha, yaha cricket nahi chal rahi (First of all, you shouldn’t have jumped into this conversation because there’s no cricket happening here). Behtar hai apni rai cricket pe rakhe, personal na hon zyada ap (So it would be better if you refrained from commenting on personal matters and only shared your views on cricket).”