Double standards: Sonya Hussyn disappointed at being snubbed by the LSAs once again

The number of coronavirus patients in US hospitals has breached 100,000, the highest level in eight months, according to the Department of Health and Human Services, as a resurgence of Covid-19 spurred by the highly contagious Delta variant strains the nation's health care system.

A total of 101,433 Covid patients were hospitalised, according to data published on Friday morning.

US Covid hospitalisations have more than doubled in the past month. Over the past week, more than 500 people with Covid were admitted to hospitals each hour on average, according to data from the Centers for Disease Control and Prevention.

The United States reached its all-time peak for hospitalisations on January 14 when there were over 142,000 coronavirus-infected patients in hospital beds, according to HHS.

As the vaccination campaign rapidly expanded in early 2021, hospitalisations fell and hit a 2021 low of 16,000 in late June.

However, Covid admissions rose suddenly in July as the Delta variant became the dominant strain. The US South is the epicenter of the latest outbreak but hospitalisations are rising nationwide. 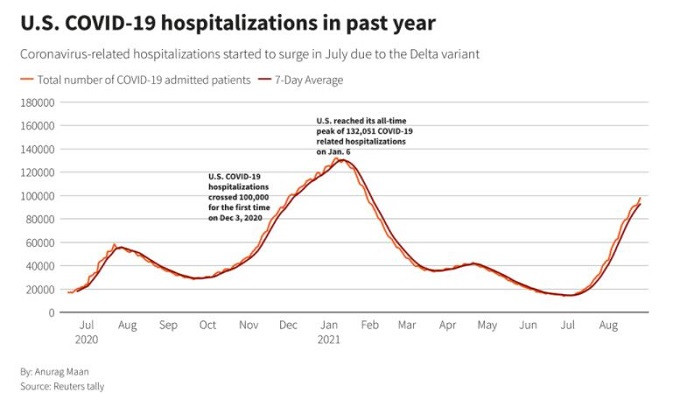 Florida has the highest number of Covid-19 hospitalised patients, followed by Texas and California, according to data from the US Department of Health and Human Services. More than 95% of intensive care beds are currently occupied in Alabama, Florida, and Georgia.

The Delta variant, which is rapidly spreading among mostly the unvaccinated US population, has also sent a record number of children to the hospital. There are currently over 2,000 confirmed and suspected pediatric Covid hospitalisations, according to HHS.

Three states - California, Florida, and Texas - amount to about 32% of the total confirmed and suspected pediatric Covid hospitalisations in the United States.

Children currently make up about 2.3% of the nation's Covid hospitalisations. Kids under 12 are not eligible to receive the vaccine.

The country is hoping for vaccine authorization for younger children by autumn with the Pfizer Inc vaccine.

Dr. Anthony Fauci, the nation's top infectious disease expert, said this week that the nation could get Covid under control by early next year if vaccinations ramp up.

The US has given at least one dose of vaccine to about 61% of its population, according to the CDC.

The United States, which leads the world in the most deaths and cases, has reported 38.5 million infections and over 634,000 deaths since the pandemic began last year, according to a Reuters tally.

Just curious how many of the COVID patients since inception have been screened for other issues such as Gillian-Barre syndrome. GB is an allergic reaction to a person s antibodies that follows a viral infection and can cause breathing difficulties even paralysis. Is any research beyond a COVID positive diagnosis being done on ANY of these patients