Taliban fighters took control of another city in northern Afghanistan on Wednesday, an official said, the eighth provincial capital to fall to the insurgents in six days as US-led foreign forces complete their withdrawal.

The Taliban capture of Faizabad - the capital of the northeastern province of Badakhshan - came as President Ashraf Ghani landed in Mazar-i-Sharif to rally its defenders as Taliban forces closed in on the biggest city in the north.

After a long battle in Faizabad, government forces retreated to a neighbouring district, Jawad Mujadidi, a provincial council member from Badakhshan, told Reuters.

He said Taliban fighters had taken most of the province and laid siege to Faizabad before launching an offensive on Tuesday. 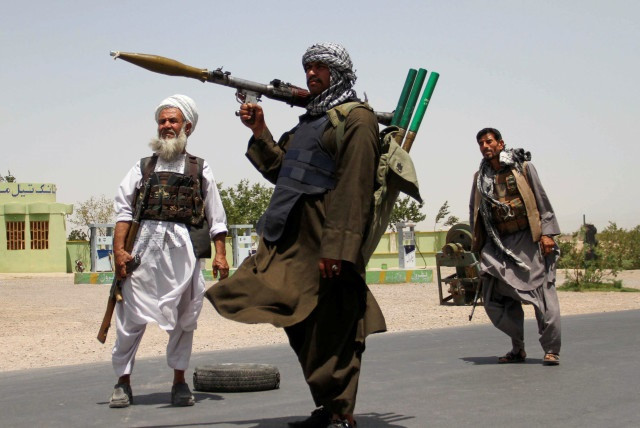 Fighters hold weapons to support Afghan forces in their fight against Taliban, on the outskirts of Herat province, Afghanistan July 10, 2021. PHOTO: REUTERS

The loss of the city is the latest setback for the beleaguered government, which has been struggling to stem the momentum of Taliban assaults in the last few months.

Taliban forces now control 65% of Afghanistan, have taken or threaten to take 11 provincial capitals and seek to deprive Kabul of its traditional support from national forces in the north, a senior European Union official said on Tuesday.

US President Joe Biden urged Afghan leaders to fight for their homeland, saying on Tuesday he did not regret his decision to withdraw, noting that the United States had spent more than $1 trillion over 20 years and lost thousands of troops.

The north was for years Afghanistan's most peaceful region, with only a minimal Taliban presence.

During their 1996 to 2001 rule, the Taliban were never completely in control of the north but this time, they seem intent on securing it before closing in on the capital.

The Afghan government has withdrawn from hard-to-defend rural districts to focus on holding population centres. In some places, government forces have given up without a fight.

Ghani is now appealing for help from the old regional powerbrokers he spent years sidelining as he attempted to project the authority of his central government over traditionally wayward provinces.

He will meet key regional leaders in Mazar-i-Sharif. 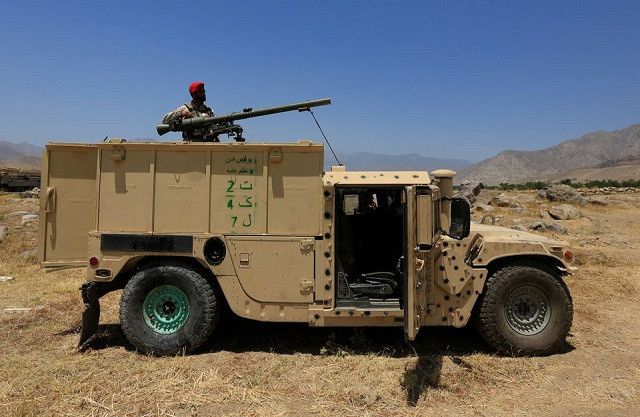 An Afghan National Army (ANA) soldier stands guard near a checkpoint recaptured from the Taliban, in the Alishing district of Laghman province, Afghanistan July 8, 2021. PHOTO: REUTERS

Fighting is also taking place in city of Farah in the west, near the Iranian border, Tolo News reported.

In Geneva on Tuesday, UN human rights chief Michelle Bachelet said reports of violations that could amount to war crimes and crimes against humanity were emerging, including "deeply disturbing reports" of the summary execution of surrendering government troops.

Six EU member states warned the bloc's executive against halting deportations of rejected Afghan asylum seekers arriving in Europe, fearing a possible replay of a 2015-16 crisis over the arrival of more than a million migrants, mainly from the Middle East.

The United States will complete the withdrawal of its forces this month in exchange for Taliban promises to prevent Afghanistan being used for international terrorism. The Taliban promised not to attack foreign forces as they withdraw but did not agree to a ceasefire with the government.