Arshad Nadeem on Saturday nearly bagged a coveted Olympic gold medal for Pakistan, but fell short, finishing fifth in the final of men's javelin throw event in Tokyo but winning hearts back home.

The 24-year-old from Mian Channu became Pakistan’s first track and field athlete to compete at the quadrennial event, earning him much applause in the country.
He managed to send the spear to the 84.62m mark, but was unluckily unable to cross the line and earn a medal.

With Indian Neeraj Chopra leading the table with a throw of 87.58m, Arshad had to throw at least an 83m distance to enter the top eight, who then had to contest for the medals.
He was up to the mark and managed a distance of 84.62m in his third and last throw.
Arshad then threw for the fourth time and covered a distance of 82.91.  His fifth throw covered the least distance, 81.98m.

His last throw was considered a foul and his best throw will be at 84.62m, well away from any podium position finish. 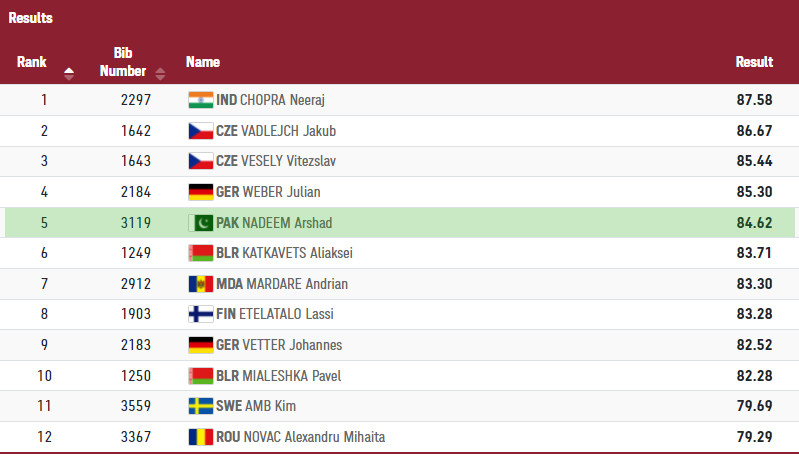 Arshad at one point in the initial stage of the contest was at fourth position but surpassed by his rivals.

“I thank my Pakistani nation and my parents for their prayers and support,” Arshad tweeted after the event.

He also expressed his gratitude to his coaches and Punjab Sports Minister Rai Taimoor.

Pakistan fielded 10 athletes in 2020 Tokyo Olympics and neither one of them was able to bag any medal for the country.

World number javelin thrower, German Johannes Vetter, could not even qualify into the top eight.

His first throw was 82.52m, while his second and third throws were fouled. He finished on ninth position, unable to compete for the medals.

Arshad had qualified for the final on Wednesday through a stunning throw of 85.16m that put him on the top of the group B qualification.

The throw also placed him at the number three position in both the groups combined, behind Chopra and Vetter.

Born in Khanewal on January 2, 1997, Arshad is a national champion in the javelin throw since 2015.

Read more: Pakistan’s last hope in Olympics, javelin thrower Arshad only has medal on his mind

He came to the limelight in 2016 when he claimed a bronze medal at the South Asian Games in Guwahati, throwing the javelin for 78.33m.

He finished third at the 18th Asian Games 2018 in Jakarta to win a bronze medal by sending the spear for 80.75m. He kept on performing and in the world championship at Doha, he bettered his throw, achieving the 81.52m.

At the National Games in 2019, he further improved with a throw of 83.65m. He qualified for Tokyo Olympics 2020 during the athletics competition of 13th South Asian Games 2019, Nepal by throwing the javelin for 86.29m. In April, this year he once again exhibited a standout performance at the Mashhad Imam Reza Athletics Tournament in Iran, where he improved his national record, throwing the javelin at a distance of 86.38m.

Pakistan’s last hope in Olympics, javelin thrower Arshad only has medal on his mind

Arshad Nadeem tops group to give medal hope to Pakistan

Pakistan’s last hope in Olympics, javelin thrower Arshad only has medal on his mind