Pakistan ‘watchful, but not concerned’ as India assumes UNSC presidency for August

The death toll from wildfires on Turkey's southern coast rose to eight on Sunday as firefighters battled for a fifth day to contain blazes still raging in coastal resort towns.

Two more people died on Sunday due to wildfires in the southern town of Manavgat, Health Minister Fahrettin Koca said, adding that 10 others were receiving treatment in hospital in the area.

Residents and tourists of popular beach city of Bodrum are evacuating hotels and homes as a major fire creeps quickly toward them from the mountain top forest area. Another terrible day of fires in Turkey. #bodrumyangın pic.twitter.com/HFZ8nkpPQt

Most of more than 100 blazes that erupted in Turkey in the last five days have been contained, authorities said.

However, fires were still blazing in Manavgat and in Marmaris and the inland town of Milas, Forestry Minister Bekir Pakdemirli said, prompting the evacuation of some residential areas and hotels.

In the popular resort town of Bodrum, a group of tourists and hotel staff was evacuated by boat as flames spread and plumes of smoke filled the sky, footage showed. Pakdemirli said the blaze in the area had been contained by Sunday morning.

Ongoing forest fire in Cokertme of Bodrum in Turkey pic.twitter.com/YhpRmcECN7

The fires had already claimed the lives of five people in Manavgat and one person in Marmaris in recent days.

Efforts were being made to put out six fires still blazing in Turkey on Sunday, according to Forestry Ministry data. 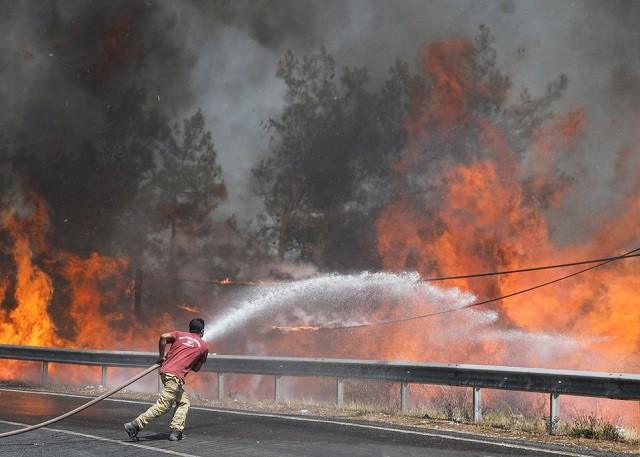 A firefighter tries to extinguish a wildfire near Marmaris, Turkey, August 1, 2021. PHOTO: REUTERS

Since Wednesday thousands of people have been evacuated from their homes. Locals as well as support teams from Russia, Ukraine, Iran and Azerbaijan were deployed to help firefighters.

The Turkish government pledged to rebuild damaged homes and compensate for losses in areas affected by the fires.

Pakdemirli said that at least 13 planes, 45 helicopters, drones, and 828 fire-fighting vehicles were involved in firefighting efforts. 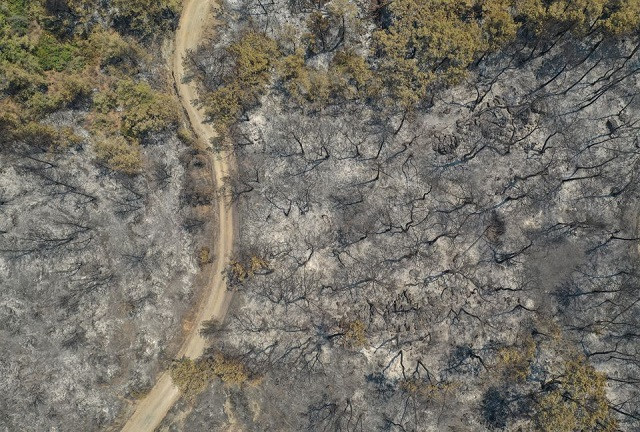 In neighbouring Greece, firefighters were trying to contain a wildfire burning in the west of the country that destroyed houses and left 15 citizens in hospital with breathing problems on Saturday, authorities said. Temperatures have been high in much of the country in recent days and are expected to reach 44 degrees on Monday and Tuesday.

On the Italian island of Sicily, firemen said on Saturday they were battling for a second straight day wildfires that reached the town of Catania, forcing people to leave their homes and the local airport to temporarily shut down.