The heated canvassing in the closely watched Azad Jammu and Kashmir (AJK) election campaign wrapped up on Friday with the penultimate round of the election process – voting – just hours away.

Deemed as the consequential moment for the state, the polling would take place amid ramped-up security.

In view of the apprehensions expressed by political parties, the polling process would take place amid strict security measures.

Historically, the voters in the valley have had a longstanding pro-Islamabad attitude and tend to back the candidate from the ruling party in Islamabad.

This time, it means that the ruling PTI’s strengthened position with the indicators already mirroring its likely victory. With poor infrastructure development and no mega project for the construction of roads over the past few years, the PML-N has found itself in an enfeebled position.

The PPP, while facing tough challenges from the PTI, is faring better than the PML-N - a political blessing for the PPP and its central leadership that had run the election drive smartly as compared to the PML-N.

The plebiscite narrative played up by the PPP during the campaign drives across the AJK is believed to be among the key factors favouring its electoral position.

In stark contrast, the PML-N’s strategic clamour during the campaign about the PTI’s alleged covert efforts to convert the state into a province failed to resonate with the people, mainly due to its contradictory nature.

Moreover, the voters felt that the PML-N leadership failed to highlight the atrocities committed in the IIOJK, notably refraining from condemning the Indian state.

What hoists the PTI above other parties is its federal government edge and commitments about referendum announced by Prime Minister Imran Khan on July 23 at a public rally in Kotli, cementing voters’ trust in the party and putting weight behind its candidates.

Seen as a strategically smarter move, the premier mentioning the referendum put a consequential dent in Maryam Nawaz‘s unpopular allegations that AJK was being annexed with Pakistan.Fewer women in polls

As the campaign picks up pace in Pakistan-administered Kashmir or Azad Jammu and Kashmir (AJK) for the assembly polls, scheduled on Sunday, there are fewer women in the fray.

Although the region claims comparatively a healthy sex ratio, out of a total of 700 candidates, just 20 women are contesting the polls.

Of a total 4.04 million population, the region houses 2.06 million female and 1.98 million male population, as per figures available with the Planning and Development Department.

As many as 12 independent women candidates are also testing their lot.

Interestingly, the PPP, whose slain leader Benazir Bhutto served twice as Pakistan's premier, has not fielded even a single woman candidate inviting criticism from the political circles.

Even as the poll campaign to elect the 53-member regional assembly in AJK has entered into the final phase, the 12 reserved seats for refugees have become a subject of debate.‘Disparity meted out to refugees’

These people do not live in AJK but are scattered wide across Pakistan.

The rationale behind the allocation of these seats was to provide representation to the refugees in the state assembly, which now many see as the "trump card" used by Pakistan’s ruling parties to turn results in their favour.Kashmiri diaspora catches election fever

Supporters of candidates and political parties contesting elections in AJK are equally aggressive in their poll campaigns far away in the UK. The reason is that there is a provision for reserving a seat for the overseas Kashmiris. Most Urdu language TV channels and newspapers published in the UK are full of statements and articles about the AJK elections.

Social media is abuzz with comments for and against the participating parties. It is estimated that nearly 100,000 Kashmiris mainly from Mirpur city of AJK are settled in Birmingham, 204 kilometres (127 miles) from London. 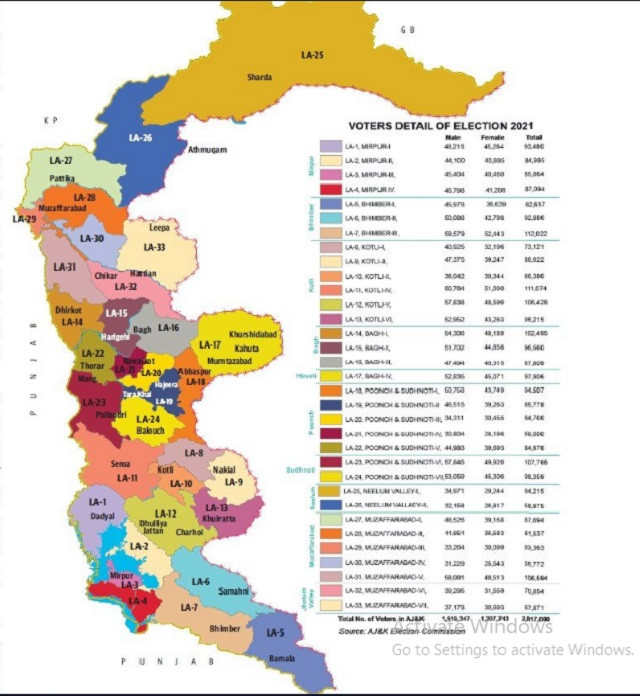