Global insurance recovery will be faster

The banks’ credit to the private sector jumped 12% to a total of Rs6.82 trillion in the previous fiscal year (FY21), as a number of sectors- including those which got government’s support and those that played a key role in turning the economy around- borrowed more during the year.

The credit increased by Rs741 billion from FY20’s level of Rs6.08 trillion, according to the data reported by Pakistan’s central bank on Friday.

“The percentage of banks’ credit to the private sector grew in double digits in FY21 compared to annual historical disbursement that expanded by single digit in percentage terms,” BMA Capital Executive Director Saad Hashmey said while talking to The Express Tribune.

“The central bank’s Temporary Economic Refinance Facility (TERF), aimed expansion of existing industries and establishment of new ones, played a key role in boosting banks’ credit to the private sector during the year,” he said.

Besides, government incentives to the construction sector, small and medium-sized enterprises (SMEs) and new automotive policy also played a vital role in encouraging the respective sectors to enhance borrowing and expand production capacity despite Covid-19 risk, he said.

Sectors that prominently increased their borrowing from banks included construction and allied industries such as cement and steel, pharmaceutical manufacturers, textiles manufacturers, power generation, transmission and distribution sector and telecommunication.

Besides, sectors pertaining to mining of coal and lignite, retail sale of automotive fuel in specialised stores and pumps, manufacturers of vegetable and animal oil and fats and personal loan like car and housing finance recorded significant rise in loans in the past one year.

Hashmey recalled that banks had approved a total of Rs436 billion under TERF till March 31, 2021. The central bank introduced the loan facility for a limited period of one year in March 2020 and commercial banks provided the loan at an interest rate ranging between 3-5%.

“The expansion of industrial sector would help boost industrial output, especially that of the large scale manufacturing (LSM) sector,” he said. “All this will jointly extend the much needed support in attaining the economic growth target of 4.8% and increasing export earnings in the current fiscal year 2021-22.” 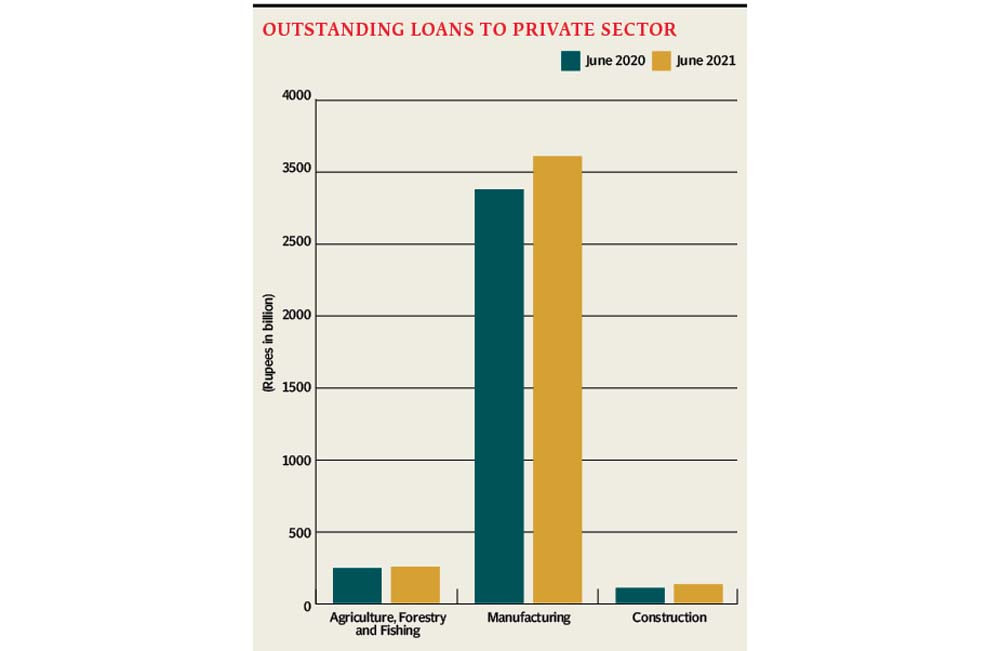 He said that the increase in bank borrowing was well supported by soaring deposits at banks in Pakistan.

The government also paid the utility bills of SMEs for three months during initial month of the pandemic outbreak in the country ie February 2020, he recalled.

“The monetary easing in the face of aggressive 625 basis points cut in the benchmark interest rate during March-June 2020 to 7% at present also supported the growth in banks’ financing to the private sector,” he said.

The outstanding banks borrowing by the entire documented manufacturing sector rose to Rs3.55 trillion in FY21 compared to Rs3.12 trillion on June 30, 2020, according to State Bank of Pakistan’s (SBP) data.