Islam Makhachev submits Thiago Moises in Round 4 at UFC

Afghan envoy's daughter's abduction case to be solved in a day or two: Rashid

Interior minister Sheikh Rashid said on Sunday that the government was investigating the abduction of the Afghan ambassador's daughter and will resolve the matter in a day or two.

Detailing the abduction of the envoy's daughter, Rashid said, "She walked to the market and took a taxi for Khadda market from where she took another taxi to Rawalpindi," he said.

"She was then reported to have reached Daman-e-Koh. The only footage we don't have is of her travel from Rawalpindi to Daman-e-Koh and we are trying to find the missing link."

Rashid added that the footages are of the Safe City Cameras, adding that these are being investigated.

"We are also in touch with the Afghan embassy and they have been cooperative in this regard," he added.

Rashid further said that the drivers of the taxis she used have also been interviewed.

"[The] credit goes to police, probing agencies as well as foreign office for moving swiftly on the matter."

He added that the statement of the envoy's daughter was shared to us today early in the morning, adding that it has also been made public. 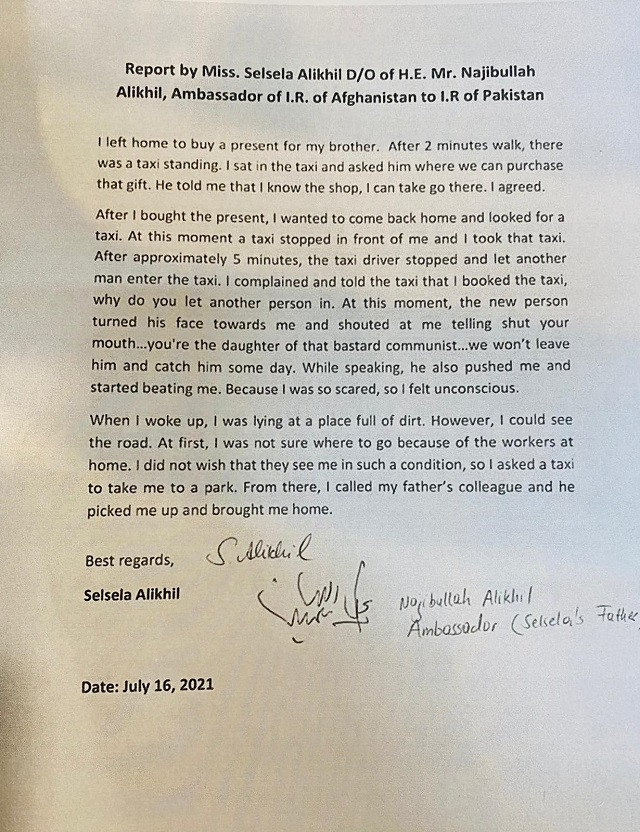 A copy of Afghan Ambassador to Pakistan Najibullah Alikhil's daughter, Selsela Alikhel, on her abduction available with The Express Tribune. PHOTO: EXPRESS

The minister said India had been misguiding the international media on the incident, as it doesn't spare any chance of launching a propaganda against Pakistan.

"We will take you all in confidence once we have completed the probe," he maintained.

'An act against Islam'

Terming the “abduction” of the Afghan envoy’s daughter “an act against Islam, Taliban spokesman Muhamad Naeem also urged the government to “step up efforts to arrest the perpetrators”.

“The abduction of an Afghan girl in Pakistan is an act against Islam and humanity and we strongly condemn it,” Naeem wrote on the microblogging site Twitter.

Further addressing the news conference, Interior Minister Sheikh Rashid informed that China has stressed that the two countries narrative on the Dasu incident must be the same.

Sheikh stated that a 15-member Chinese scrutiny committee visited Dasu yesterday to probe into the bus blast incident in Kohistan.

"They [Chinese investigators] reached Dasu by a helicopter," Rashid stated.

"We are investigating the incident jointly," the minister said, adding that China had appreciated the hospitality of the interior ministry and the cooperation of the country's investigation agencies.

"China recognises the mutual ties between the two countries to be unbreakable," he remarked.

Rashid added that the Chinese government realises that Pakistan is fulfilling its responsibilities beyond its capacity.

The minister rejected the notion that work at Dasu had been stopped following the incident.

"The projects of the CPEC [China Pakistan Economic Corridor] are in full swing and these will remain undeterred," he said.

A team of Chinese investigators reached Islamabad on Friday to probe into the Kohistan bus tragedy earlier this week in which 13 people, including nine Chinese citizens, lost their lives, sources said.

The sources said that the team met with senior Pakistani government officials after their arrival in the federal capital. They added that the Chinese investigators would visit the accident site on Saturday (today) and receive a briefing from the Pakistani security officials.

The incident occurred on Wednesday, in which a bust ferrying staff members to the place of work fell into a ditch, killing 13 people including nine Chinese and two Frontier Constabulary (FC) personnel.