Six of a family die in roof collapse

Rescue 1122 team had to cut grills with heavy cutters to get access to the victims trapped in the debris. PHOTO: EXPRESS
LAHORE:

At least six members of a family died after the roof of a house collapsed in Shadbagh on Friday.

The victims included women and children and the family has been living in the house situated on Imam Ghazali Road, Wasanpura for the last six years.

Construction work was going on the first floor. The ground floor’s roof was made of girders.

The family members of the houses were asleep at midnight when suddenly the construction area collapsed and fell on the roof of the ground floor. It could not sustain the burden and caved in with a heavy thud.

The family members who were asleep got trapped under the debris. The roof collapse spread confusion and panic in the neighbourhood. The local people rushed towards the site.

The site of the accident was covered with dust and debris. They called Rescue 1122.

Rescuers rushed to the spot and launched a rescue operation. The teams of the urban search and rescue unit took part in the operation and it was led by District Emergency Officer (DEO) Shahid Qamar.

The rescuers removed the debris. They had to cut grills with heavy cutters to get access to the victims.

After hectic efforts, they made a way to the victims. The victims were evacuated and shifted to Kot Khawaja Saed Hospital. All the six victims breathed their last during treatment.

The unfortunate incident left the locals and the relatives in a state of shock and awe. A pall of gloom descended on the neighborhood next day as the street presented a deserted look.

The collapse was so destructive that it left cracks in nearby buildings too.

The neighbours locked their doors and moved to other places.

The building was situated in a low lying area and the victim Ali Aslam was a poor man who worked in embroidery.

The survivor Usman, his younger brother, said that he was utterly destroyed. 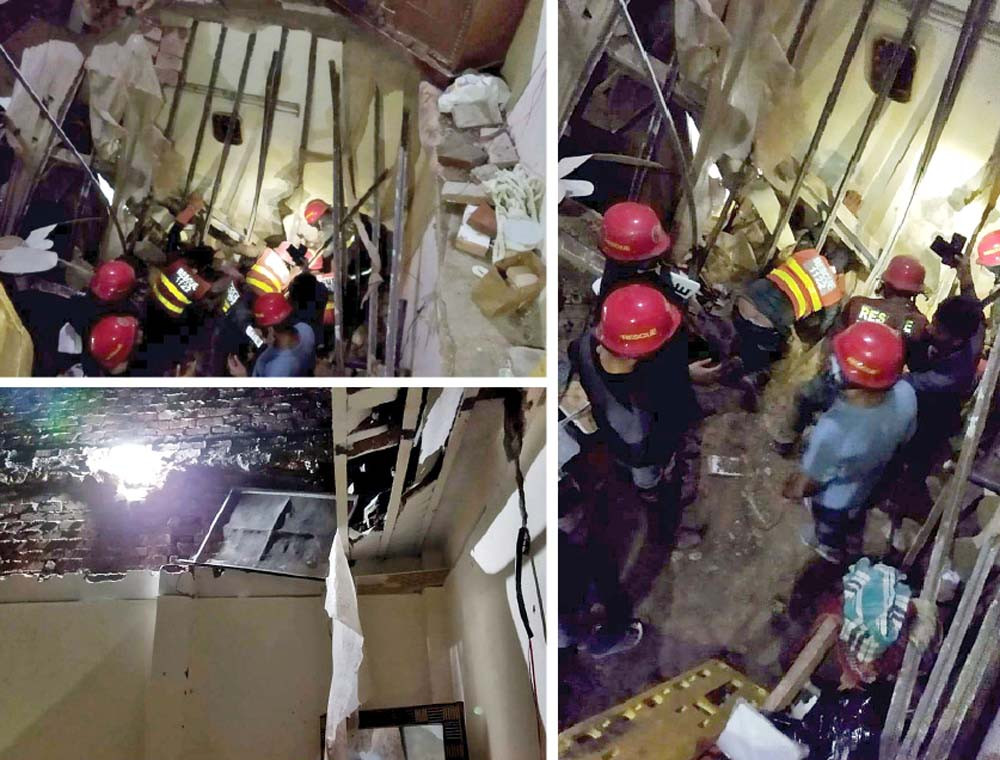 “It is the end of the world for me. My mother and brother have left me alone. My house is a pile of debris,” he told media persons.

He requested the higher authorities to help him cope with this grave emotional as well financial loss.

Punjab Chief Minister Usman Buzdar has taken notice of the incident and sought a report from the authorities concerned.

Last month, at least nine people, including six members of the same family, were killed when roofs and trees collapsed during wind storms and heavy rains in Okara on Monday.

Separately, Sohail, a 50-year-old man, was killed when a tree fell on him in Ghousia Chowk and a 55-year-old man was crushed to death when a wall collapsed in Haveli Lakha on Hujra Road.

A motorcyclist was killed and six others, including two women, were injured in a motorcycle accident in Gojira.

Dozens of signboards in the railway bazaar have fallen. The power system has been suspended for three hours.

On July 4, at least six people, including two children, were killed and four others injured when billboards fell and walls collapsed due to an overnight rainstorm in the district and adjoining areas. Strong winds blowing in the region since the night and heavy rain caused several fatal accidents in the area.

Two girls died when the wall of their house collapsed at Machli Chowk.Those injured in the accidents caused by the storm were taken to local hospitals by the rescue service.

Data compiled by Punjab Emergency Service (PES) Rescue 1122 available with The Express Tribune showed that at least 140 incidents of building collapse were reported in Punjab in August 2020.

The Rescue 1122 report further revealed that the highest number of cases of building collapse was reported in Lahore and Faisalabad. In Lahore 18 and in Faisalabad 14 buildings collapsed due to rainfall.