Firms raise over Rs80b at PSX

Number of IPOs soars to 14-year high during the year

The Pakistan Stock Exchange (PSX) has facilitated companies in raising investment and debt worth over Rs80 billion from institutional, individual and retail investors in the current fiscal year ending June 30.

Most companies raised funds for expansion of their production capacities as low interest rate in the country encouraged investors to finance expansions on expectation of a better return in future.

“The investment in companies was backed by a turnaround in the national economy, which entered into a growth mode from the stabilisation stage during the outgoing fiscal year 2020-21,” Arif Habib Limited Head of Research Tahir Abbas said while talking to The Express Tribune.

Secondly, 25 old companies (whose shares were already available for trade at the bourse) raised an additional Rs50 billion by offering right shares - the shares which are offered to the existing shareholders of companies at a price lower than the current share price in the market. Besides, a company raised debt worth Rs11 billion at the PSX as well.

“PSX is expected to maintain a strong momentum with regard to IPOs and fundraising in the next fiscal year starting July 1,” Abbas said.

IPOs next year would be backed by a turnaround in the economy, low interest rate, expansion in existing production capacities at factories and establishment of new projects by companies under the State Bank of Pakistan’s (SBP) Temporary Economic Refinance Facility (TERF), he said.

The government has revised Pakistan’s economic growth upwards to 4% for FY21 compared to the initial target of 2.1%. The economy recorded a negative growth of 0.5% in fiscal year 2019-20 owing to the Covid-19 pandemic. 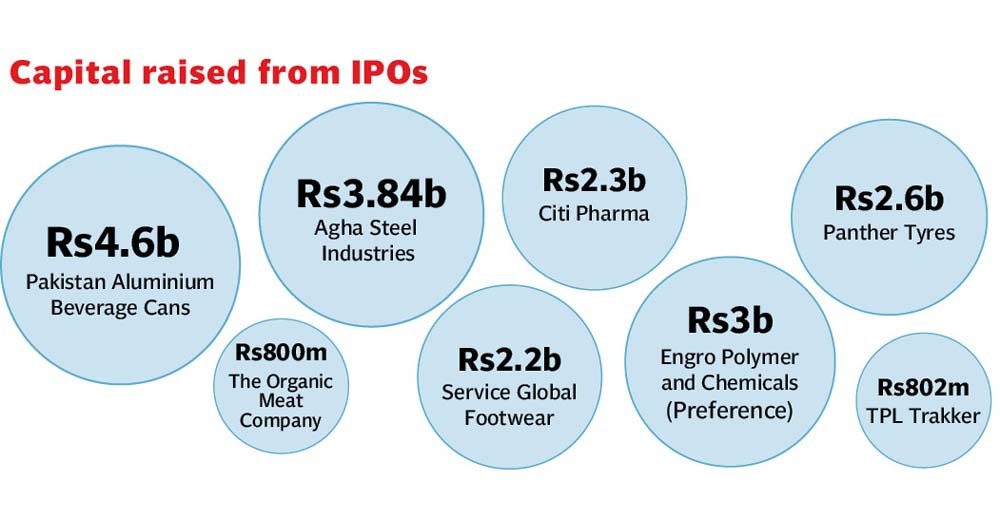 Moreover, the central bank aggressively slashed the benchmark interest rate by 625 basis points during March-June 2020 to 7% at present. “If the rate is revised up, it would be measured and gradual as per SBP’s latest monetary policy statement (MPS),” he said.

In addition, banks have approved subsidised loans of Rs436 billion under TERF. “Such companies may also opt for IPOs at the PSX,” he said.

It is pertinent to mention that new listings were oversubscribed by 2.2 times as they generated a combined demand for Rs44 billion against the raised value of Rs20 billion, according to the brokerage house.

Recently, the MSCI proposed to downgrade the PSX to Frontier Markets from Emerging Markets after market capitalisation of top three companies fell short of the level prescribed by the MSCI. The MSCI would announce its final decision in November 2021.